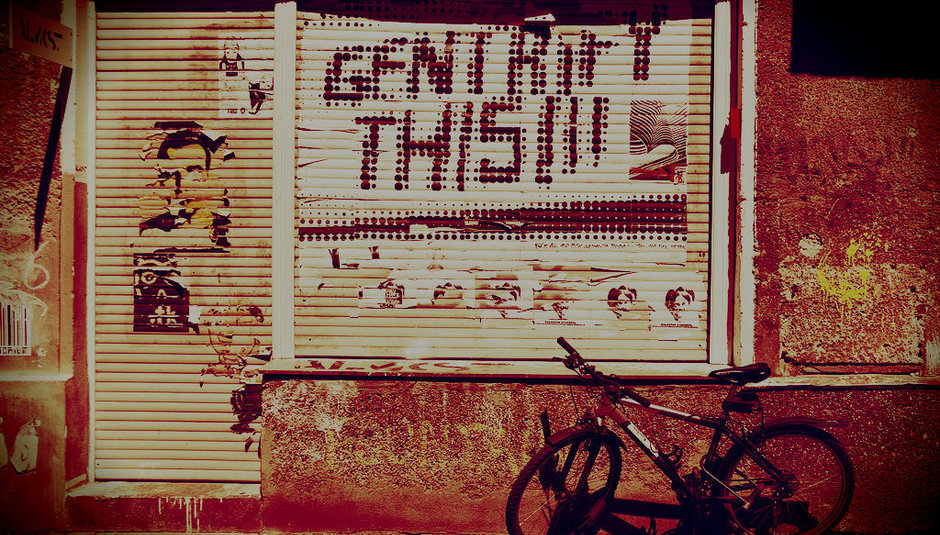 Jasper (ex-Art Brut) on the Buffalo Bar, which is set to close, and the slow demise of the UK's National Sweatbox Association...

Last night, I didn't go and see Mclusky play at the Buffalo Bar because I went to my work’s Christmas drinks instead. Actually, they didn't even clash, I don't even have that as an excuse. Without too much of a problem, I could have been in the pub at one, had a tie round my head by four, photocopied my balls by five, persuaded a pissed up Graham from Accounts to come watch some ‘real music’ by six, and been in the Buff by eight, or at least in the Highbury ‘spoons until game time – I’m not made of money. But I didn’t.

Instead I drank too much, went home, irritated my wife and woke up in the morning with a crippling 34 year old’s hangover and a Facebook feed filled with tales of greatness from the leaky red womb of Highbury Corner. The timeline stories seemed to scream 'How last night at the Buffalo Bar completed me spiritually as a human being'. And this is what makes small venues great. Why all great bands should reform and start doing important things (I think Falco already went over that, to be fair). And why I was facing the wrong direction when it was all going on.

As you may have read, along with London venues like Madame Jojo’s, The Enterprise, Vibe Bar and pretty much all of Denmark Street, the Buffalo Bar is closing. After 14 years of niche nights, louder than atoms bands and no effort made to decorate, it is closing its doors due to a legal technicality and a non-caring new freeholder. The place where I have seen innumerable amazing bands, been to innumerable amazing nights, and above all it's the place where I have played the guitar most. The Buffalo Bar is the place that saw my career in music start, and possibly end. The place I have been most drunk the most times. If a place could ever draw a beat from my charred, wizened cirrhosis of a heart it would be this bar. Aside from (the second floor of) my work and my parents’ summer house, it’s the only place where every permanent member of staff knows my name. Like Cheers, if Sam was an angry man from Newcastle, Carla once went on tour with The Yummy Fur and Frasier was a vomiting goth in a flooded toilet (and Norm was Keith Top of the Pops).

We all seem to be making incorrect choices at the moment. Our faces talking to the wrong people, complaining about the wrong things. While we’re rampaging about how a cereal shop, the Beardy National Front of Gentrification, an insult to the indian burial ground Shoreditch was inadvisably built on, is destroying London, right behind us, like a pantomime cunt, is the slow demise of the nation’s National Sweatbox Association – or venues of between 100–300 capacity, depending on who you ask. And before you think I’m going to start being awfully contrary and write about how the ‘beards aren’t to blame’, that it’s actually the property developers / chain pubs / ducks in top hats who are dismantling London from the inside (although, they are...), you would be wrong. This aspirational fashion predicament we find ourselves in is destructive. For the first time in modern history, a youth movement would rather be middle class than working class, would rather know how to make a decent cup of coffee than sick up at an indie disco, would rather savour a craft beer than fifteen pints of fortified wine. And for many (parents), this is probably a good thing. But for the first time in history, a youth movement doesn’t want to be disgusting. For the first time in history a youth movement is actually encouraging places that smell like stale beer and wee to shut down. I reckon.

Now, I hate the word ‘hipsters’ as much as the next right-thinking person. It’s a meaningless adage used by lazy journalists and social media complainers. It doesn't really apply to anyone and yet kind of applies to everything, and so loaded with irrational hatred and bile that it’s probably too charged to use. So let’s call them something else. How about ‘primitives’ (sorry, Coventry indie). Primitivism, or ‘the longing to shuffle off the complex arrangements of an advanced culture’ as historian Jacques Barzun once helpfully explained, has followed us through the last 500 years of cultural history, from Martin Luther to Oliver Cromwell, from William Morris to Johnny Rotten. It’s the urge to burn the frills off the culture around you and begin again with something pure. It’s healthy, wonderfully cyclical, and often sparks cultural movements that are genuinely era defining. At least that’s what I read somewhere.

However, this attraction to the primitive seems to have been distorted in the last ten or so years. Thanks to the baby boomers’ babies’ rise of the middle class and influx of the less baggage laden culture from the New Worlds – and let’s not forget the dreaded ‘democratising’ I-N-T-E-R-N-E-T – these beardos are wrenching their eyes, ears and taste buds away from the pasteurized high streets and back to the ground. A streaming, organically produced, brewed-at-home ground-zero, that is cleaner, more direct and better for you than anything the major food outlets or record labels could ever come up with. However, as a byproduct of this distillation process, as all the junk is stripped away, everything seems to have lost its homogenised wee-y smell. Beards are unkempt, but the smells are pleasant; the foods are tasty, but the ingredients basic; home recordings are made with enough hi fidelity to get into the 1987 top 40; and clubs and pubs, like Johnny Depp’s face, have the sheen of mismanagement but are anything but. For the first time, the attributes that were once the mainstays of the middle class 30-something are leaking into the younger generation – organic bitter and Wholefoods, not white cider and Asda. (N.B. Now, of course the irony of this is that the primitives, in their aspirational desperation to reduce, are now fetishising vintage poverty, particularly the ‘simple life’ of Depression era dustbowl America. Before you start ‘riding the rails’, order a £12 pork and beans at Foxcroft and Ginger and expect disappointment, like only a hobo knows how. But that’s probably another rant, for another time.)

This is all a essentially London-centric idea, I know, as that’s where I live, but, like any movement worth its salt, I’m sure the branches are everywhere. We all know a smelly venue that’s closing, a clean pub that’s opening and some mismatched furniture that needs overpricing. The closure of pint-sized venues – the dissolution of the sweat monasteries – is nationwide. That’s because what we're discussing here are the tentacles of gentrification. A subject so charged with race, class and tiresome opinions,that it would be pointless to broaden the discussion any further in this piece. And although the primitives are forged by the best of intentions, they are sanitising our streets, wiping them clean with independent bicycle repair shops, preparing the palettes of the young for the safe taste of the future. And right behind them all is the spectre of development, like Jacob Marley’s rattling chains.

So as East London falls, who’s going to care if a small, let’s face it, pretty bad for you looking club on Highbury Corner is shut down to make way for (I shit you not) an empty room? Who cares if Denmark Street’s penises selling guitars are replaced by penises drinking in Costa? And Soho’s penises selling penises and replaced by cunts selling coffee? Not the youth. The youth are transparent. Disparate. Their culture atomised on the internet into a million ineffective pieces, into a million concrete rooms selling nothing but organic tomatoes and hand-sewn candy floss. And what am I doing to help? Nothing. Signing internet petitions and submitting articles with questionable syntax. I'm as guilty as the rest.

But what I do know is that some people are doing something, even the MP Emily Thornberry is having a go. I know because I heard her tell us. With the brilliant rag-tag group of glam fans, ageing indie kids and staff members, the campaigns to save these places are not dead yet. The beards and The Men have not won. Not yet. It’s always heartening to hear someone has a soul. Something it’ always hard to admit when you are part of the problem – as, after all is considered, nothing changes the fact that I missed Mclusky at the Buffalo Bar last night.

1) There are various farewell events for the Buffalo Bar, including one by our friends from Rockfeedback.
2) To find out what you can do to support small venues around the UK follow the Music Venue Trust on Twitter and Facebook. Or SIGN THEIR PETITION.
3) I Left A Band: Life After Art Brut.