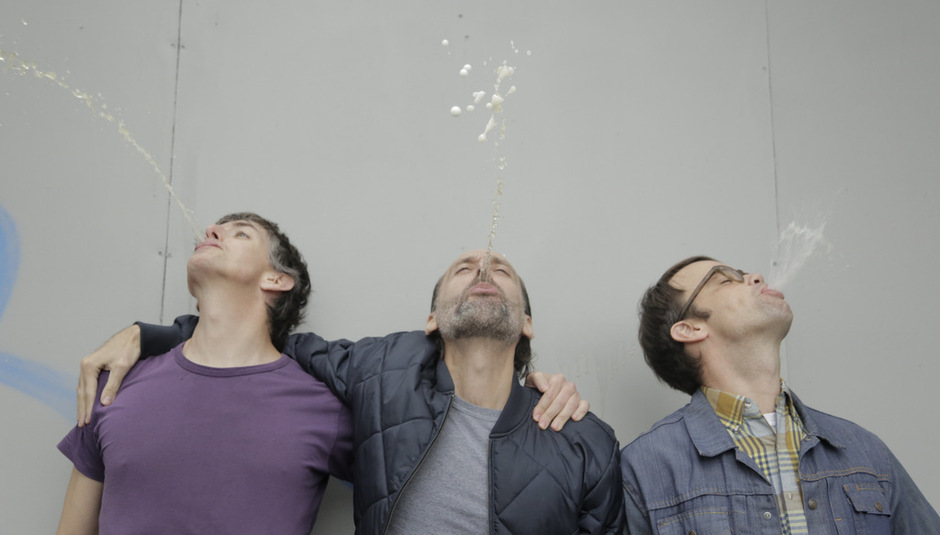 On Saturday night Trans Am leapt convincingly into my top three gigs of the year, jostling for space with Nine Inch Nails and Fuck Buttons, fitting company and an accolade well deserved. It certainly beat those two gigs in terms of intimacy and viscerality, so well done chaps. I had heard their live show was great but holy shit, I was not prepared for this.

On record Trans Am are often beautiful but live they rock out hard and fast. Electrowerkz’s somewhat dingy interior is the perfect setting for this dirty, sweaty, riff-tastic show. When the band move away from the synths and become a traditional power trio they could easily be mistaken for a gleefully atypical metal band, especially on surprise thrash monster ‘Backlash’.

But first up in the evening were AK/DK, who certainly made an impressive spectacle: two drummers (one of whom was possibly the happiest human being I’ve ever seen on stage) who both sang and messed around with a whole host of electronics. They were like a joyous mix of Holy Fuck and Battles and set closer ‘Battersea’ will be rattling around my head for possibly the rest of time.

Back to the headliners, then. I’ve always thought that a good mark of a band’s live ability is how they respond to technical problems. When a snare stand goes during a muscular run through new single ‘Anthropocene’, barely five minutes into the set, the band convincingly passes my test, mainly due to drummer Seb Thomson telling the following, somewhat-edgy joke:

Q: Why did Kurt Cobain shoot himself in the face? A: Because he was in a band with Dave Grohl.

Tasteless humour aside, Thomson is on top form tonight. In my review of this year’s Volume X I said that he was “surely one of rock’s most underrated drummers”. I take that back - he definitely is the most underrated drummer in all of rock, and he commands a presence on stage that few other sticksmem I’ve seen can match. In fact all three members of the band make a great visual impression, from captivatingly tall Nathan Mears to guitar whizz Phil Manley in his sleeveless orange jumpsuit.

My enjoyment of the evening certainly wasn’t hurt by the fact that they played a set that was near perfect, albeit surprisingly light on new material . Still, we got plenty of what the band themselves called ‘classic Trans Am’, in particular a good showing from Futureworld and their double album masterpiece Red Line. From the moment they kicked off with the latter’s opening track ‘I Want It All’ I knew I was in for a good time, and not-so surprise encore ‘Play in the Summer’ was the most perfectly exciting end to the evening. The only possible misstep was Volume X’s unexpected ballad ‘I’ll Never’, whose tenderness didn’t quite translate to a live setting, and was indeed the only song not to feature live drums. But overall Trans Am were as loud, rocking and tight as hell as one could hope for. They were definitely worth the long wait it’s taken me to see them and truly the most raw and exciting gig I’ve seen all year.

In Photos: The Antlers @ Hackney Empi...