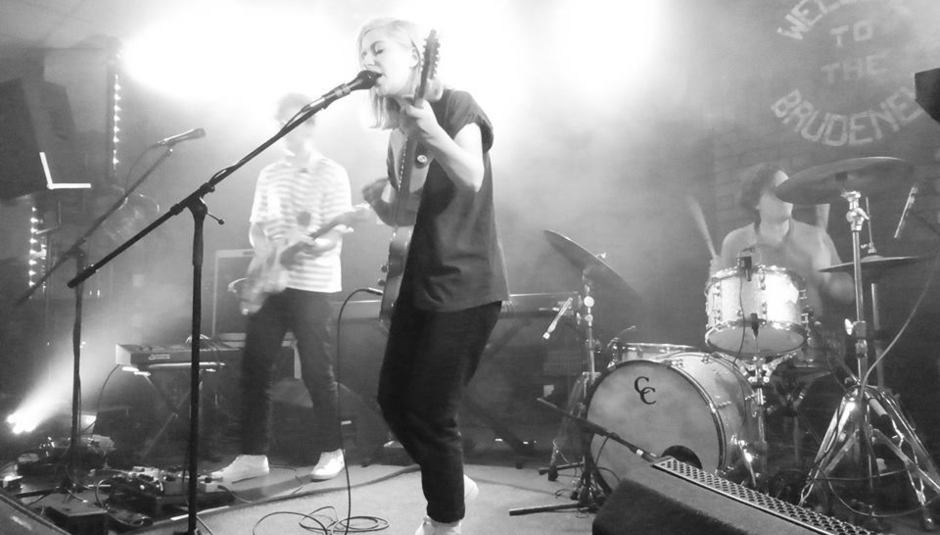 Sometimes a song comes along that brings everyone and everything around it to a standstill. Demands to be heard from beginning to end in all its uninterrupted glory. Then once those final notes have drawn to a close, finds itself stuck on repeat ad infinitum. Such moments of musical voracity only occur once in a blue moon. And that blue moon last appeared in April of this year when Canadian quintet Alvvays dropped the majestic 'Archie, Marry Me'. Pure pop in its most primitive form. Molly Rankin's seductive vocal echoing the likes of Camera Obscura's Tracyanne Campbell or former Concretes singer Victoria Bergsman over a timeless melody REM would have been proud to call their own back in the day.

Not that Alvvays (yes, it is pronounced ALWAYS) only have one song. Far from it in fact, as their self-titled debut evidently demonstrated three months later. As the soundtrack to this summer, rarely a day has passed without its nine charmingly effervescent pieces passing through my stereo. Surefire contender for album of the year that it is, the greatest test of any band's mettle comes from their ability to perform live. And with Alvvays having attained such a high profile this year off the back of said album, their next venture onto UK soil was always going to be met with a hive of anticipation. So when it was announced they'd be touring with Real Estate this autumn, ticket sales understandably went through the roof. Not that we're suggesting the headline act aren't capable of selling out half-a-dozen medium sized UK venues off their own backs. Nevertheless it would be fair to say the addition of Alvvays to the bill undoubtedly speeded up the process.

With the queue already stretching towards the back of the Brudenell car park a good half hour before the doors are scheduled to open, it's clear a large proportion of those in attendance this evening are here to see the opening act. As vocalist Molly Rankin pointed out when DiS spoke to her recently, the Alvvays story isn't just your average "right place, right time" good fortune story. Instead, her's and their story is one of hard work. That all of the band still hold down day jobs as well as playing music tells its own story, and when the five nervously appear on stage just after 8:30pm to a three-quarters full room one suspects they're a little overawed by all the attention.

Thankfully, it takes literally thirty seconds and one verse of opener 'The Agency Group' for any such nerves to subside. Frontwoman Rankin takes centre stage, flanked either side by guitarist Alec O'Hanley and keyboard player Kerri MacLellan while rhythm section Phil MacIsaac (drums) and Brian Murphy (bass) man the rear. For the next forty minutes we're given a masterclass in indie pop perfection. Between-song banter is kept to a minimum bar one reference to the previous night's drunken escapades in Birmingham and a dedication to merchandise girl "Emma", celebrating her birthday today. Instead, Alvvays let their songs do the talking and each note and syllable is obediently devoured by all and sundry out front.

Playing a set comprising ten songs, eight of which are lifted off their aforementioned debut, the bright and breezy approach to songwriting so prevalent throughout the record is translated onto the live stage with consummate ease. Chirpy ditties like 'Adult Diversion' and 'Next Of Kin' nestle comfortably with the more reflective 'Ones Who Love You' or 'Atop A Cake'. Recent b-side and album bonus track 'Underneath Us' takes proceedings in a more ethereal direction that wouldn't sound out of place on a 4AD compilation from the early nineties. On the flipside, 'Your Type' offers two minutes of raucous buzzsaw pop in the vein of Talulah Gosh or The Shop Assistants. Unsurprisingly, the loudest cheer of the night is reserved for set closer 'Archie, Marry Me', by which point the dancefloor has become a heaving, bouncing mass of delirious bodies.

Afterwards, Molly Rankin can be found behind the merchandise stall, chatting away enthusing about tonight's headliners (who all five members clamour towards the front to see) and signing records. When bass player Brian Murphy tells DiS they're coming back over at the end of January we do a little jump of joy. Their ascent firmly mapped out on the horizon, the Alvvays bandwagon is gathering momentum at breakneck speed. Be sure not to miss it.