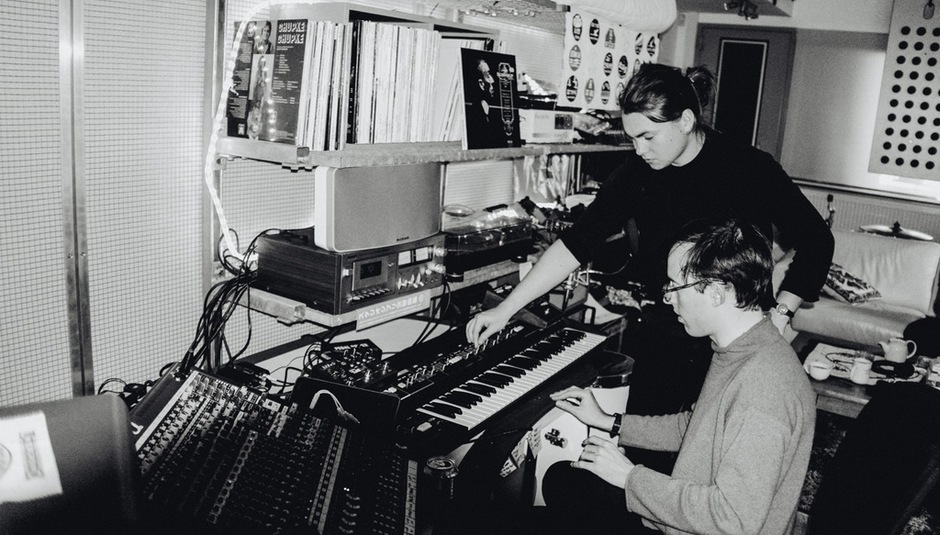 Our Planet Gear column is an irregular feature on DiS in which we ask musicians to get a bit geeky and talk us through the equipment that makes the 'magic' happen... Ahead of this year's Mercury prize, DiS in partnership with Naim Audio's new wireless music system, mu-so, will help you GoDeeper into 2014's nominated albums. Today, we would like to turn your attention to Bombay Bicycle Club, who have delved into the secrets behind their unique sound...

When I first started producing as a teenager, I was using a fairly simple and inexpensive DAW called "Magix Music Maker". Over the years, as I began learning more about computer based music production and was demanding more from the DAW, sure enough the company began to develop and upgrade the program. It's current flagship product, "Samplitude Pro X Suite" is one of the most heavily featured DAWs out there.

I use a Peluso 22 251 microphone for vocals, going through a Universal Audio LA-610 preamp/compressor. For drums I use my brother's dusty old kit that we've been playing since we were 15 years old, usually with just a mic in the bass drum and one overhead going through Audio Damage's Rough Rider compressor. I'll almost always use samples from Battery to beef up the kick and snare. I have a Studio Electronics ATC-1 synth for bass and both a Juno-6 and a Matrix 1000 for pads/leads. My most frequently used plugins are the Cheeze Machine (synth pad), TAL-Dub (dubby delay), and Fruity Slicer (for chopping up samples). All of my mixes go through an API 2500 bus compressor to glue everything together, and I monitor on a pair of KRK V8's.

I would say my recording technique is defined by laziness. I record as little as possible and spend most of time chopping things up and manipulating the samples on the computer. I recycle sounds hundreds of times. I have one shaker loop, one tambourine loop and one crash cymbal which I use in most of my projects. I have very few plugins, having spent a lot of time choosing my favourite one for each purpose and sticking with it. The less time spent deciding on a specific reverb plugin for that very subtle Fender Rhodes overdub, the better.

While I've used Jamie's brother's late 60s Ludwig kit for the majority of our recordings in the past, I prefer to take a more modern kit on the road because they tend to stand up to the rigours of touring a bit better. I'm playing a Yamaha Oak Custom in the States with a 14" chrome over brass Gretsch as my primary snare and a 12" hammered bronze Natal as an auxiliary snare. In general I like my drums to sound tight and punchy, so I use a reasonable amount of dampening as you can see from the picture (basically a couple of Moongels on each drum and then a towel and some felt for the bass drum.) This is especially true for my snare - I like my snare to be quite dry with a nice crack to it while also retaining some warmth. My 14" Gretsch has all of these qualities. It has die cast hoops which helps to focus the sound a bit, and although it is relatively shallow at 5" deep it still has a lot of body to it.

I use my 12" Natal snare in three songs. When recording 'It's Alright Now' for our latest album I did a couple of takes of this snare pattern on a caixa (a snare drum that they use in samba bands) which we then layered on top of eachother to make it sound like multiple drummers were playing at the same time. I bought this Natal snare to replicate that tight, high-pitched sound. I also use it in a couple of other songs for accenting.

With the latest album being more electronic, I had to think of a way to reproduce some of the sounds on the album live. I introduced a Yamaha DTX900 module into my setup with three Yamaha pads, as well as a Roland KD7 kick trigger pad which is tucked in to the right of my main bass drum pedal. I use the kick trigger pad for two songs which require an electronic kick sound - 'Home By Now' and 'Eyes Off You'. I also have Roland triggers on my main snare and kick. These have various samples attached to them, such as electronic clap sounds, which I use at various parts of the set.

Although it might not be immediately clear when you first listen to this record, there are actually quite a lot of guitar parts on it. While guitars defined the first couple of albums, they have now just become one more texture that contributes to the overall sound. Jack and I probably butted heads a few times when recording the guitars: his approach is best described ‘in the box’ and he’s more than happy to record everything in Native Instrument’s Guitar Rig on his laptop. I’m probably more of a purist and I’m still not convinced that the amp modeling software stands up to the real thing. As a compromise – and because we wanted to keep a lot of the guitar takes from his original demos – we often re-amped the parts from Guitar Rig through my 1990 Vox AC30 at Konk Studios, where we were tracking most of the live instruments. The opening song on the album, Overdone, is a great example of this: we spent ages finding the right fuzz sound in Guitar Rig and then played through it into an amp.

The gear we used was pretty simple and I think nearly all the parts were recorded on my dad’s 70’s Telecaster, which remains the best electric guitar I’ve played. He spent most of the session texting me to ask when he could have it back — I think in the end I stopped replying. The effects we use have remained pretty consistent over the last few years: lots of chorus and reverb! For this we mainly used my Analogman chorus and the reverb channel from a shitty old 70’s Yamaha mixing desk. I think the bass guitar sound in Carry Me is probably my favourite guitar/bass sound on the record – it was recorded through a rotary phaser and ended up sounding fairly bonkers.

I think trying to play the record live actually ended up being a lot harder than recording it in the first place. Because we wanted the core of the band to stay the same live – two guitars, bass and drums – we had to come up with new parts when we got to live rehearsals. It’s enough of a cliché as it is to ‘get more electronic’ and we really wanted to avoid our live show becoming four guys playing synths and drum machines. Having said that, my job now often seems to be trying to make my guitar sound more like a synth. To do this I use an Electro Harmonix Microsynth and an Earthquaker Devices Bit Commander. When coupled with my Strymon Timeline I can make my guitar sound like an arpeggiating synth, which is actually pretty cool, though I’m sure my 16 year old self would be disappointed that I’m not playing Josh Homme-esque riffs.

There's lots more coverage of all of this year's nominees on our Mercury Prize 2014 mini-site.