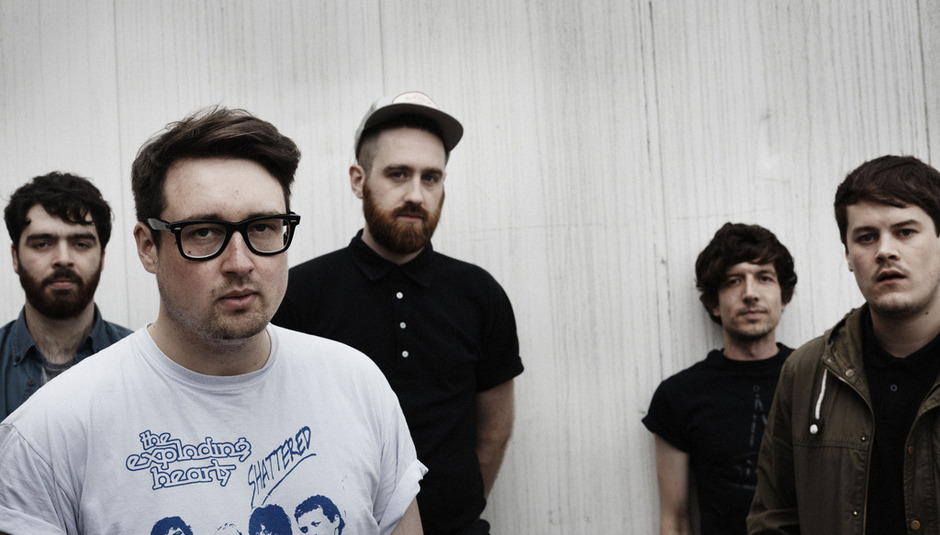 Band on Band: Eagulls and Hookworms interview each other

Band on Band: Eagulls and Hookworms interview each other

This weekend (October 24th/25th 2014), Neptune prize nominees Eagulls and last year's Neptune winners / DiS' 2013 album of the yearers Hookworms headline All Years Leaving Festival in Birmingham, so, we got the noize-making pair to interview each other.

So how did you meet?
MB: Me and Jonny met on the mean streets of Halifax (aka a middle class cul-de-sac) about 20 years ago playing Red Arse and kicking footballs at wasp's nests. I forced myself on everyone else when I moved to Leeds, sorry lads. Me, MJ and SS played in a garage punk band with a bad name for a bit before this.

How long have you been a band?
MB: I believe it will have been 5 years since we first started practicing this coming winter. Longer than my guinea pig is likely to live.

Leeds has a thriving scene. What's it like to be a part of it? Is it great / Cray?
MB: I think I'm more excited about how close Laynes Espresso and Bundobust are to each other than the Leeds music scene at the moment.

You’re obviously massive Oasis fans, what did you think about Beady Eye’s new album?
MB: I liked that single with the trumpets, readymade for a rowdy Sky Sports 1 advert.

So we heard you recorded your last album with MJ. What's he like to work with?
MB: Nightmare, thinks he's Bob Rock. Have you ever seen Some Kind of Monster?

Tom asks for MB: How long have you been playing bass and which is your favourite string.
MB: I first played bass in Blink-182 covers band about 12 or so years ago. My favourite is definitely the bottom string. If you're not careful you sometimes catch the bottom one if you play higher string anyway, it's pretty technical so I won't go into it here.

Here's a crazy one guyz. It's the year 3000 and everyone is running scared from lasers and the only thing that can save you is a packet of crisps. Which flavour crisps would you choose to battle the angry laser men? I'm such a crazy music journalist guyz.
MB: Maybe Prawn Cocktail, I like the idea of a prawn army.

You guyz seem pretty current. So who's gonna win X factor this year?
MB: I haven't seen any of the X-Factor this year, but 'the internet' all seem pretty psyched on this One Direction mk.II boy band. Great British Bake Off was good this year though, right?

Sorry, only a few more questions guyz. We won't keep you long... If a band sells out a 300 capacity venue at £7 per ticket how much does the band get paid? I bet you guyz are rich right?
MB: Nine tenths of fuck all. We're extremely bad at holding onto the minimal amounts of money we make as a band. The more we get paid, the more we spend at Marks & Spencer’s on the M1.

So Sam, tell us about the tent peg story...
SS: A shitter in need is a shitter indeed.

So, Eagles, which band was named first? And have PRS ever got confused in your favour?
Well obviously the drummer from 'the eagles' was originally the synth player in the 1960's band "So". You should Listen to their breakbeat song called "who givz a #uck".... Its so good! Oh And PRS, is that some sort of political party?? If so, I didn't vote them.

The word Eagle is thought to have come from the Latin 'aquilus' meaning 'the colour of darkness'. What is darker: the hue of your threads, the beef of your bass, or the giff of your gaff?
Well Goldy always leaves people in the dark when it comes to texting, calling, emailing back etc and he's on a giff gaff phone contract. So there's your answer.

Goldy, I liked your work in The Dangerous Crew. Did you ever have issues with the East Coast?

Sadly some of Goldys best friends passed away by stray gunfire during the great coastal battle of 2000 and he doesn't like to talk about it much but his management replied with this statement. - " FUCK THE EASTSIDE. SAFE"

Would you ever use the phrase "album drop"? As in: "our first album dropped and it made waves across the rock scene", however accurate that may be.
"Yo bro we've been shreddin' the rock scenes waves hard since the album dropped. Cowiebunkka!!" - this is a direct quote taken from our KERRANG interview earlier this year. So,YES!

Goldy again: does that make you a Goldy Eagull then?
Well aye!

The Late Show With David Letterman is on quite late. How did you keep awake and what time did you have to lie in until the next day?
We always ring our parents to ask if we can stay up late and luckily our parents and the record label came to a compromise that we could stay up late as we needed as long as we didn't eat too much American candy. We had to get up at 8am the next day to help out cutting the veg for the Sunday dinner.

That's weird, we both have animal names. How many Leeds bands or promoters (current or former) with animal related names can you name? I can get eleven.
NIRVANA, MACY GREY, PRINCE, THE UNDERTAKER Ermm ALAN SHEARER. Sorry what was the question?

Who wrote your Wikipedia page? It's very lovingly researched. <3
I don't know but, Whoever did do it can be thanked for the wonderful questions I get asked over and over and over again every time I do an interview. I'm going to go and delete it after I write this.

Did Franz Ferdinand ever 'Take You Out'? If they didn't, I'm sorry to hear that - 'You Could Have It So Much Better'.
No word of a lie. We went out with them in Dublin and we went to do karaoke. Little did they know it would end with Tom putting Take Me Out on and the whole place going pretty bonkers.The singer was onstage too. True story.

Have you ever, only in desperation, put anything up your bum?
I sometimes keep small change up there for when I have to tip people with poor service.

Eagulls self-titled debut album is out now (read Dom Gourlay's 9/10 review). Also in the depths of our archive there's this Eagulls interview from back in 2011.

Hookworms new album The Hum is released on November 10th.