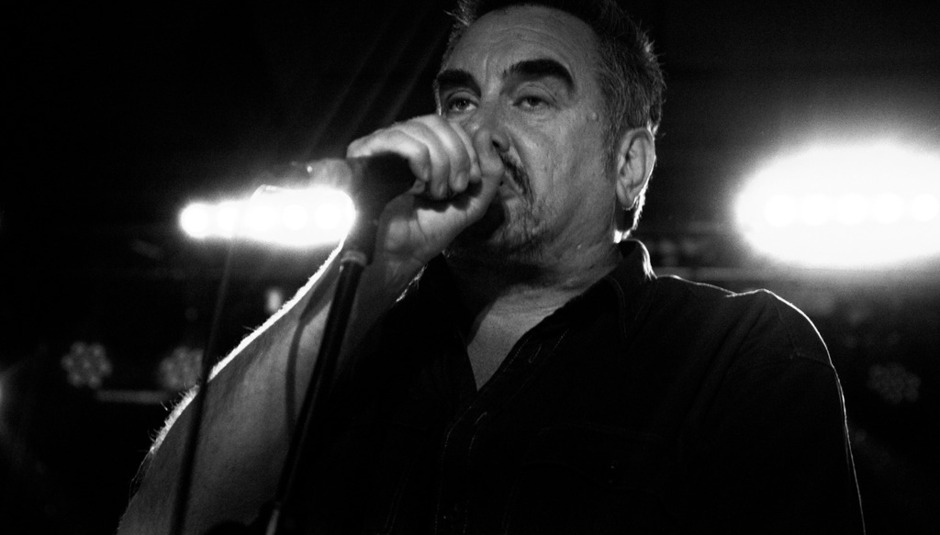 It was in the Bodega some six-and-a-half years ago that I first witnessed Sleaford Mods live in the flesh. March 2008 to be precise, booked on the recommendation of the singer from a band I was working with at the time. Back then, consisting of just Jason Williamson and several backing tapes. Rants about everyday life in Nottingham set to minimal electronic backing tracks that touched a nerve with the handful of punters who'd turned up early to watch his opening slot. It was unique in the way it sounded so gritty, yet out of place in the context of what was happening at the time. Although engrossing, it would be fair to say many of those present couldn't have predicted the unprecedented phenomenal rise of Sleaford Mods these past twelve months.

However, few could argue the recognition presently bestowed upon him isn't richly deserved. With a prolific writing rate that's delivered seven albums and umpteen singles alongside those frenetic live shows, his time is now. Which is just as well considering the venue is packed to capacity. Tonight's show sold out well in advance, no doubt boosted by Williamson and longtime cohort Andrew Fearn's addition to the bill. So, when the familiar strains of 'Jobseeker' - a staple of Sleaford Mods set since 2008 - and 'Tied Up In Nottz' are unleashed, they're understandably received with a welcome fit for a hero, something Williamson in particular is seen as around these parts. Meanwhile, new single 'Tiswas' ("I can hear the screams of people who wanna be me") causes a minor surge from the back of the venue that ripples all the way to the front of the stage. With headline shows in bigger venues already announced and sold out for the early part of next year, who's to say what 2015 holds for Sleaford Mods?


Indeed, one could argue this evening's headliners were seen as a similar kind of anomaly to the support act back in the day. Having initially formed some thirty-six years ago as the first wave of punk was drawing its last breath, The Pop Group have become synonymous with the words innovative, confrontational and confounding ever since. Cited as an inspiration and covered by many artists from all genres over the years - Loop's version of 'Thief Of Fire' arguably the pick of the bunch - their legacy has lived on way beyond the three short years they existed before calling it a day in 1981. Having left a sparse back catalogue of only two studio albums and three singles, there was still a lot of unfinished business for Mark Stewart and co. to address.

Fast forward to 2010 and the reformation was in full swing, culminating in a couple of shows with Sonic Youth in December of that year. The last time DiS spoke to Mark Stewart eighteen months later, he implied a new Pop Group record was in the making. And while we're still awaiting the release of said album - provisionally titled The Alternate at the time - this month's reissue of 1980's We Are Time, a collection of live tracks and studio outtakes together with the Cabinet Of Curiosities rarities compilation culled from the same era both serve as a timely reminder of why The Pop Group have continued to be held with such high regard for four decades.

Which brings us to this evening. Currently playing as a five-piece, Stewart a captivating sight centre stage while original guitarist Gareth Sager and drummer Bruce Smith also make light of their veteran status. With nine of the eleven songs in the set lifted off We Are Time and played in chronological order, it gives an insight into what The Pop Group must have sounded like way back when. Thrust onto an unsuspecting punk scene fusing elements of dub, jazz and funk alongside the rock stylings of the day, it's perhaps easy to comprehend why they didn't really fit in at the time. Simply light years ahead of their peers back then, the future was theirs. Ably taken and bastardised for their own ends by all and sundry from Orange Juice and the Happy Mondays to Franz Ferdinand and Bloc Party further down the line. Songs like 'Genius Or Lunatic' and 'Spanish Inquisition' cut a fine line between polemic aggression and dancefloor hedonism, while the ingeniously titled 'Amnesty International Report on British Army Torture of Irish Prisoners' resonates as intently as its moniker suggests.

Elsewhere, the addition of singles 'She Is Beyond Good And Evil' and 'Where There's A Will There's A Way' alongside breakthrough seven-inch 'We Are All Prostitutes' during the encore provides the "greatest hits" moments. If such a thing exists within The Pop Group's canon. But then that also exemplifies why their relevance in 2014 remains unabated. Uncompromising, unnerving and brutal as ever. Long may it continue.