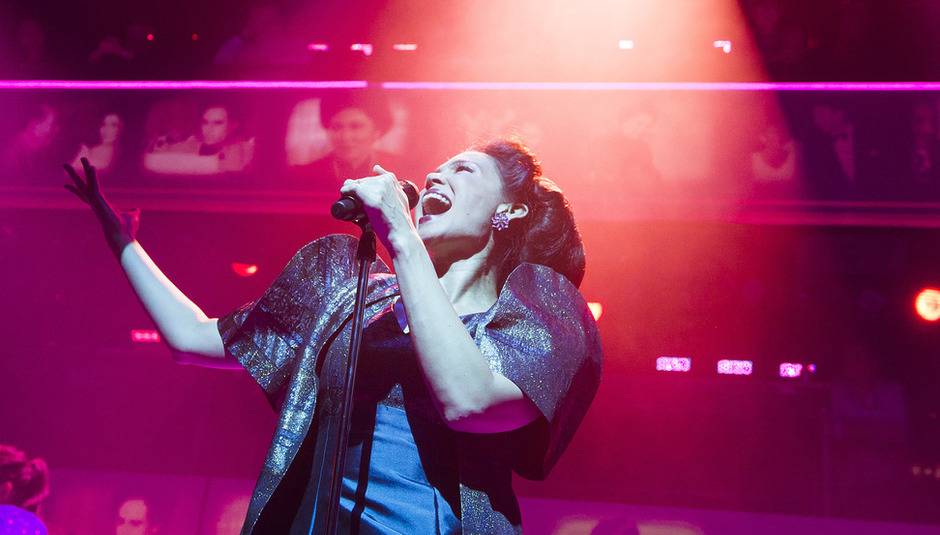 Of all the divisive, controversial, mythical figures of the twentieth century, Imelda Marcos is perhaps the one that best encapsulates the sheer power of a well-cultivated image; of style over substance.

The former first lady of the Philippines - in fact still living, and currently a member of the Philippine House of Representatives - was famed for her narcissistically excessive existence while her late husband, President Ferdinand Marcos, was in office, systematically spending millions of dollars of public money on frivolous property investments, lavish shopping trips (she purportedly owned well over a thousand pairs of shoes), a busy self-promoting touring schedule that saw her befriend world leaders on both sides of the cold war, and legendarily lavish parties. What’s more, the people of the Philippines played along, and the Marcoses were beloved. At least for a while.

It’s then perhaps with no small amount of irony that David Byrne and Fatboy Slim’s 2010 concept album on the Filipino first lady, Here Lies Love, suffered from assuming its own appeal on behalf of the audience. The album took the form of a classic, Tommy-style poperetta, with central characters narrating the story throughout, and featuring a cast of some 20 guest vocalists (including Florence Welch, Cyndi Lauper and Tori Amos) somewhat confusingly sharing roles throughout the album’s meandering narrative. The album’s reception was tepid, especially considering the magnitude of the names involved, but it’s now evolved into a multi-sensory theatrical live show - and finally it starts making sense.

David Byrne's been no stranger to cross pollinating art forms in performance, adding theatrical semblances of narrative and characterisation to the legendary Talking Heads concert movie, Stop Making Sense, and this production of Here Lies Love aptly eschews many common theatre practices, creating a truly unique show, and outdoing absolutely all others in the process. 'Immersive' theatre is at the crest of its rise, with Punchdrunk having just completed their most ambitious project to date, The Drowned Man, but Here Lies Love assumes the now-familiar standards of wall-breaking and audience participation at no expense to the telling of its story. Under the direction of two-time Tony-nominee Alex Timber the all-encompassing staging unavoidably absorbs us in to the action.

The newly refurbished Dorfman theatre within the National Theatre on London’s South Bank is set up like a legitimate discotheque – upon entry a Filipino DJ is already blasting out colourful instrumental beats from the score. The cogs of coercion whir into action the second you step through the door, and many in the audience obligingly follow suite and gently boogie until instructed otherwise. We are utterly sucked in by the spectacle of the beguilingly beautiful Imelda Marcos (here pitch-perfectly portrayed by Natalie Mendoza) and her dozens of dazzling costumes - we even happily dance along when instructed in a brief routine.

David Byrne’s score is as typically catchy and danceable as anything he’s ever written, hearkening back to the plentiful earworms of Talking Heads in the early Eighties, or the more recent triumph of his and Eno’s Everything That Happens Will Happen Today, while Fatboy Slim’s contributions help bed the entire songbook atop relentless user-friendly beats.

It’s in the lyrics that Byrne somewhat breaks from his often cryptic stream-of-consciousness best exemplified back on Remain in Light. It’s of course via necessity, but the words that got lost in the overkill of the Here Lies Love double album, propel the story along without sacrificing Byrne’s usual gift for choosing the right sounds to sing, or getting too bogged down in metaphorical depths. We travel through Imelda Marcos’ rise and fall, from provincial beauty queen in her youth, to First Lady, and ultimately into exile - and the mind bogglingly brilliant staging squeezes something out of every square inch of the set, with every member of the fantastic cast singing and dancing their way through dozens of costume changes, a constantly morphing stage that surrounds the standing audience, four directions of video projections, and even live video feeds as they wander among the crowd.

It’s tempting to perhaps decry having to constantly shift focus in the audience, with every song (and sometimes every verse within a song) taking place in a different part of the room, but there’s always something to look at in every single direction throughout the show. We find ourselves pushed and pulled in all directions, with Imelda’s minions enforcing a regime of dancing and smiling while an increasingly ominous discontent simmers out of sight. Towards its second half, several key moments strip away the bacchanal veneer, with a stunning turn from Gia Macuja Atchison as Imelda Marcos’ rejected poverty-stricken childhood friend Estrella Campos turning up to implore Marcos to, “just acknowledge that you knew me” in ‘Solano Avenue’ - the riveting moment when Marcos seems to cross the point of no return from image-obsessed rising star to malevolent personality cult. There are musical high points galore, but the indisputable stand out is the heartbreaking confessional, ‘Seven Years’, in which the seeds for Imelda Marcos’ personal decline and fall are sown, while members of the cast seemingly float through the crowd on wandering pieces of stage.

Snatches of new material composed specifically for the stage play are scattered throughout the piece, including real transcripts from the Marcos’ occasionally less-picturesque private lives, and a handful of vital speeches illustrating rising dissent against the Marcos regime (delivered by Dean John-Wilson’s impassioned Ninoy Aquino). But this isn’t gritty realism - it’s camp of the highest possible order, ingeniously refracted for far nobler ends. Despite the odds, absolutely every final detail works - from the complicatedly disassembled and reassembled set, to the four-way projections - and as the glitz disintegrates along with Imelda’s grip on the Philippines towards the finale, the climactic tragic events are amplified all the more. For ‘Why Don’t You Love Me’, Imelda Marcos’ final realisation that it’s really all over, Natalie Mendoza’s voice jarringly shifts from its saccharine high register to a gruffer bark, as the facade disappears and desperation kicks in.

From the impeccably directed and vast array of technical details, to the stellar cast, Here Lies Love is a total and utter success. As David Byrne’s brainchild, it ranks alongside almost anything that’s come before - but like all the best theatre, you’ve really got to be there to get it.