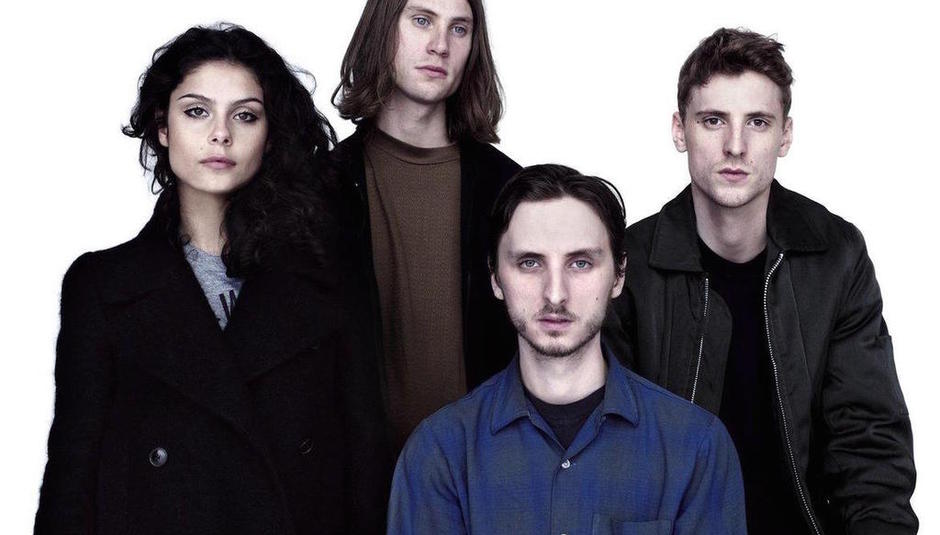 In a year of amazing music, when cultural revivalism finally seemed to start to wane, These New Puritans’ Field of Reeds still stood out as one of 2013’s most brilliant and original moments. Back in 2010 Hidden had already seen the band evolve from mere post-punkers (albeit ones of unusual depth), to far broader-scoped timbral connoisseurs, programming as much electronics and notating as much woodwind as they were strumming away at guitars and bashing tom toms. Field of Reeds went a step further, ultimately developing during its inception, to a convoluted album-length narrative, all the while growing in its instrumental scope to require an orchestra-sized ensemble cast of guest musicians providing strings, brass and a great much else.

Now, a year on, the depth of Field of Reeds’ poetry, and the nature of its near-operatic narrative are as quietly powerful as ever, and 15 months of listening and dissecting has only thrown up more questions about the precise nature of its content. However, the beguiling singular beauty of the richly orchestrated music, is by no means up for discussion - and These New Puritans have since put together and scored a full scale live re-enactment of the album. Recorded at London’s Barbican centre with a 35-piece band, along with the Synergy Vocals choir (who performed on the album), and the Heritage Orchestra. The album also features fully orchestrated versions of two Hidden classics, ‘Three Thousand’ and ‘We Want War’, as well as a more recently completed and entirely new song from the Field of Reeds sessions that had previously been fated for the cutting room floor, ‘Spitting Stars’. Expanded (Live at the Barbican) is a truly extraordinary recording, fully capturing the tension that hangs by a thread during the Field of Reeds suite’s deepest moments, and the impassioned depth of Jack Barnett’s words delivered with organic imperfection, along with Elisa Rodrigues, in front of a symphonic wall of musicians. The consistent threat of dissonance that hovers between the ebbing verses of ‘Nothing Else But This’, or ‘The Light in Your Name’ come utterly fully to life in Expanded, and Field of Reeds’ narrative semblances almost coalesce into a fully fledged operetta.

We caught up with Jack Barnett to talk about the challenges in orchestrating the grand undertaking, and how it’s been to live with Field of Reeds.

You've spent a lot more time living with Field of Reeds now. How if at all have your opinions of it changed, or deepend? The lyrical meaning has been the subject of much speculation from listeners.

I haven’t listened to it since I finished it so I don’t really know. also, I always make albums because that’s what I want to hear, but by the time I've finished I don’t want to hear it anymore. I should really start making albums that I really dont want to hear, by the time I finish it I'll be really into it! So look out for the folk-pop tnp album; the musical equivalent of a keep calm and carry on mug.

In terms of the lyrics - it’s strange because they completely predicted the trajectory of my life, even though they were kind of incongruous at the time, and I wasn’t really thinking about them at the time. My music knows more about me than I do.

I mentioned in a recent article, that I'd met a guy who runs a rehearsal studio in Bethnal Green, and that he remembers you rehearsing for Field of Reeds in his tiny space a while ago...what were those sessions like? It's a small environment to begin such a grand project…

Haha, yeah that really made me laugh. I think that was actually for the FoR septet tour. We spend quite a lot of time confusing rehearsal studio owners with our weird gear and instruments. and music! Also we’re usually completely silent for for about a week. setting up, programming, that kind of thing. They must be wondering what the hell we’re doing! But yeah, his space is good. Good rates - I'd recommend it highly

Were the pieces written with these large rich arrangements in mind? If not, how did they develop that way?

Well, the line-up is pretty much the same as the one that recorded the album, just made a bit more efficient. It’s just that when you put them all in the same room, things get pretty complicated!

It still took about two months of working on the arrangements and live sounds - programming and stuff. But in terms of sounds or instruments, I'm always led by whatever music demands. sometimes it will be piano, or sometimes is will be something electronic that will take a long time to construct microscopically, or in the case of ‘Light In Your Name’ sometimes it will be smashing glass, or string harmonics. the sounds and the song are the same thing really. It’s not something that’s ‘applied’ afterwards.

What initially inspired the tonal shift that birthed Field of Reeds?

What is basso profundo singing and how did you come to use it for Expanded?

It’s the lowest kind of bass singers, the lowest possible range of the human voice. they’re used mostly in russian orthodox music. Way lower than an ordinary bass singer. again, it’s a part that I wrote, and then we went through the process of finding them - we got ahold of the lowest singers in the country. I like the idea of pushing at human limits; it’s an incredible sound to witness in the flesh.

How were the musicians for the ensemble selected, and what was the rehearsal process like?

The barbican got the heritage orchestra involved. They had experience of working with people like Aphex Twin etc. Synergy - the vocal group - had worked on album, so they sang live with us. A pleasure to play with them both. Then we had members of the seven-piece live band mixed in, but every time we play it, we have to construct a new band - like with the Dutch show we just did.

To me, Field of Reeds is, more than anything else, a love story with characters singing from both sides. Others have connected the album with ‘the land’ and geography, amongst other things... How far off your intent are we? Does any of this matter? What effect has the drama or narrative had on performances?

It’s about people. you’re right, in that there are two characters, or two voices. That’s a pattern that emerged from the writing process. it’s not really deliberate, and not telling a ‘story’ in a prog way, but yeah it’s important, and it just happened.

An interviewer once said to me - “there are no people on this album, and its very harsh”. Actually there’s people everywhere, I just didn’t write “I this” or “I that”, because that would get repetitive. I did that deliberately, removed the ‘I's and ‘you’s. “‘Path through clouds, but tied in knots”, not “I am walking on a path through clouds, but it is tied in knots”, or “she is walking along a…”

I only left them in if they really helped the song. They really had to earn their places! “I was a grain of sand, you were the still black sea” - I like that lyric - it’s all calm now but you have the potential to completely turn me upside down.

I do think it was misunderstood, this album, as being very cold or austere. Which is frustrating when you’ve worked on something for bloody ages and poured yourself into it. But I hope you can express emotion without resorting to clichés. For example, you don’t have to to indicate love with a big swelling strings section, or something funny with a kazoo. I hope you could write a love song all on kazoo, or a funny song all with massive vibrato strings.

Relationships between people - they are such particular things. From outside they are impenetrable. so the music can be very particular or strange, and not just some generalised idea of love or hate or happiness or sadness.

Anyway, it’s not always good to know what every bit means, because the whole point of music is to reach beyond yourself. it’s never good to know 100% what you’re doing.

What was the biggest challenge in staging the Expanded show, and then taking it to various venues?

Oh there are lots. I could bore you about them for hours, but to be honest this is George’s area - stage setups etc….. There’s always 10% of people who are involved who will become very unhappy and disconcerted, but that comes with the territory!

How did ‘Spitting Stars’ come about? Is it a new song totally separate and subsequent from Field of Reeds?

It’s a new song, but part of it is built out of a song that we started for FoR but never finished, because it wasn’t ready.

On Expanded there’s new arrangements for two songs from Hidden. How did you create those arrangements? Does it make you rethink or reconsider how you originally recorded those pieces?

Oh that was really fun, especially ‘Three Thousand’. I don’t really listen to the songs once I finish them, but they are still alive to me as pieces of music that keep changing. I've lost track of how many versions of ‘Three Thousand’ there’s been - it must be 6 or 7. I think this version is the best so far.

So how was Michael van der Aa involved throughout the life of Field of Reeds? I'm a big fan of how he uses unusual additional instruments in his ensembles. Did he help out with the Expanded project at all?

We wrote some music together at his studio in holland, before Field of Reeds - we worked on a few ideas, one of which was ‘The Light In Your Name’, which was based on a piano fragment of mine. He’s definitely been an influence on my music. He has these recurring sounds of branches being broken, and we have recurring sounds of knives being sharpened and glass being broken. I'd recommend his piece called ‘After Life’, look it up on youtube.

What are your thoughts on UKIP entering parliament the other day?

I think our generation is too distracted to care.

Anything that increases David Cameron’s level of discomfort can’t be all bad.

But why do you think people voted for them at all?

Too much Jeremy Clarkson.

How is this country going to solve its growing divisions? The South vs the North… Scotland vs the Union… a growing discomfort with London-centricity…

Probably not by reading books written by Russell Brand.

Expanded (Live at the Barbican) is out now.