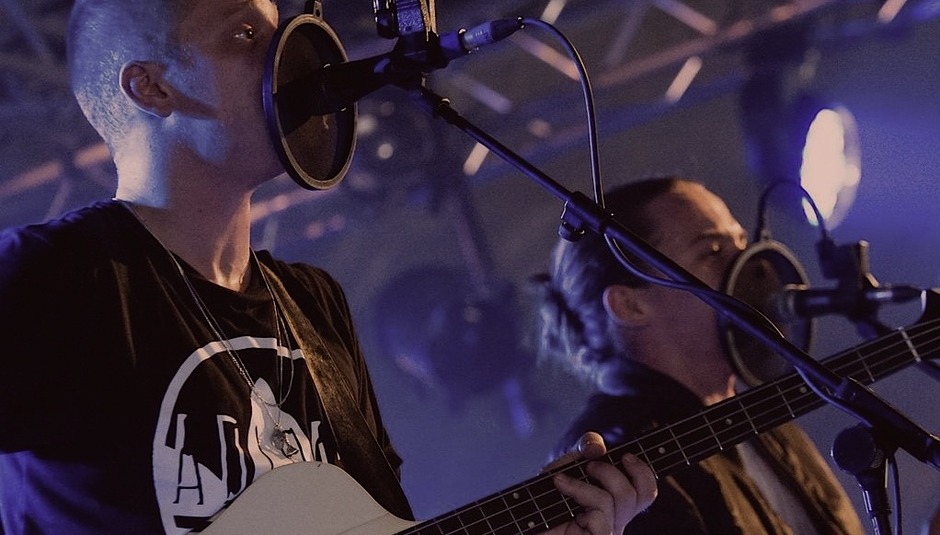 Ahead of this year's Mercury prize, DiS in partnership with Naim Audio's new wireless music system, mu-so, will help you GoDeeper into 2014's nominated albums. Today, we would like to turn your attention to the once-mysterious dance-loving duo Jungle. We asked Sam Moore, who reviewed their debut album back in July to explore the band's somewhat bumpy journey to the top since then.

Visit our Mercury mini-site for more coverage of all of this year's nominees.

Any remaining vestige of Jungle’s once-impervious mystique was essentially obliterated earlier this month when, prior to interviewing the duo on VH1’s Big Morning Buzz Live, Nick Lachey – that’s him from Nick-and-Jessica Simpson “fame”, folks – wheeled off this introduction: “This London collective was once called the UK’s most mysterious act,” he announced, his eyes as dead as Bambi’s mother. “But now there is no hiding for these guys. With their popularity rising, their 1970s-style music is making everyone wanna get up and dance.” As a bandmate smirked at this prosaic description, the camera panned out to reveal the two men behind Jungle, Josh Lloyd-Watson (known as ‘J’) and Tom McFarland (‘T’), standing awkwardly next to Lachey.

“Speaking of mystery,” asked Lachey’s banal, nameless co-host, “Is this the real T and J?”
An uncomfortable T raised his eyebrows, before hesitantly confirming: “It is.”
And with that, the Jungle mask had well and truly slipped.

This rather embarrassing encounter was broadcast on early-morning US television as part of Jungle’s evidently-concerted effort to “crack” America (a spot on Jimmy Kimmel Live! evidently wasn’t enough), utilising the momentum from a stunningly-successful 2014 that could well culminate with them winning the Mercury Music Prize for their self-titled debut record.

But is their nomination the most inevitable in this year’s ragtag bunch of marketable indie bands, esoteric solo artists, and that obligatory jazz act that not even its bandmembers’ mothers knew existed?

Jungle’s rise to the top really has only been a matter of time. Emerging back in June 2013 with the much-lauded ‘Platoon’ video, the wheels (how exactly do you traverse a jungle, anyway?) were firmly in motion at the start of 2014 as their affiliation to indie superlabel XL became apparent. Then more singles (‘The Heat’, ‘Busy Earnin’, ‘Time’) with wonderfully-choreographed videos were dropped. Keeping the identities of J and T a secret, meanwhile, was mostly achieved by the pair not appearing in any of those videos or the initial promo pictures, as well as keeping interviews to a minimum and using pop shields (yes, pop shields!) whilst performing.

But as the critical acclaim swirled into a frenzy, there was the pressing issue that the dialogue – or rather lack of – that they’d built with the media and the record-buying public would inevitably have to change with the release of Jungle. How could they, for instance, perform these tracks in the middle of the afternoon at Glastonbury or Reading whilst keeping the idea of putting the product before the creator alive through this means of mystery without, say, the aid of SBTRKT-style masks? Having constructed an Emerald City of hype that reams of music fans had demanded entry to in the pre-album days, the curtain of truth was now being raised to reveal just who was pulling the Jungle strings.

What certainly didn’t help matters in this regard were the online investigators who dug up revealing information on J and T: as well as being exposed as members of short-lived Britpop revivalists Born Blonde (listen, above), the greatest point of interest was the discovery of a 2006 Guardian article that aired the worldviews of, amongst other demographics, privately-educated teens. They happened to be both T and J; the latter full of adolescent bombast as he declared: “I want to be bloody famous and successful. I don't want to care about anyone else. I'll be backstabbing if I have to."

It may be a tad impertinent to bash Jungle round the ears with quotations that they made when they were 16 and 17 (I’m sure we’d all regret the things that we used to say on MSN Messenger at that age), but it did bring up a point of contention that some critics have used to subsequently dismiss the duo’s authenticity. The case of so-called “privileged” musicians – i.e. those artists who hail from well-off and usually privately-educated backgrounds – succeeding is a touchy subject for many an internet scribe, with particular contempt in Jungle’s case - one branded them as “venal scions to capitalist fortunes” - arising from how they’d essentially endeavoured to hide their backstory through carefully-constructed artistic mystique.

Just how much had T and J benefitted from these purported parental or private school connections? Perhaps the strongest evidence can be witnessed in their polished (and rather unsubtly Adidas-sponsored) videos, which are almost like adverts in themselves for the band as brand – a theory that seems even more plausible if you consult that Guardian article again: “Josh Lloyd-Watson, 16. Father: owns an advertising business; Mother: owns a PR business.” People liked the Jungle product when it was new, exciting, and mysterious – it no doubt fuelled the momentum behind the album and its subsequent placing on the esteemed Mercury list - but once the branded bomber jacket of concealment (yours to buy on their merch site for £110) began to unravel, some keyboard warriors felt justified in brandishing their pitchforks.

Though, on the flip side, there were those who voiced this counter-opinion: who cares? Jungle is an excellent work of neo indie-disco, packed with a host of lasting numbers that continue to enthral even in these increasingly-dark October nights – the Miami funk-shuffle of ‘The Heat’, for instance, or the sumptuous serpentine soul of instrumental ‘Smoking Pixels’. It certainly lived up to T’s observation in that VH1 interview that “the plan [was] to change people’s perspectives about how you can play electronic music.” It doesn’t matter entirely what the makers of this music said when they were 16 if they’re creating a sound as exciting and continuously vivacious as this, and, for that reason alone, their Mercury nomination is as fully warranted as it may be predictable.

What will be interesting is if they do pull off a Mercury victory (they’re currently fifth-favourite to do so at 8/1 – worth a £10 punt, perhaps?). Not only will it set off their critics once again on the subject of privilege in modern music, but it’ll almost certainly project Jungle into a position at the vanguard of British music – which’ll make their American mission just that little bit easier. Heck, it may even land them a few more advert-soundtracking deals: no doubt you’ll have heard ‘Busy Earnin’ playing rather meaninglessly in a current commercial for the Amazon Fire phone, which sort-of puts Jungle on an artistic level with Hilary Duff, who endorsed it in the US through the means of a heavily product-placemented music video.

Fame’s a tricky business, and it seems that Jungle may have to negotiate a few more awkward interviews with awful reality-star-turned-presenters and continue selling their craft to capitalist conglomerates for a little while longer if they want to scale the heights of recognition that their current activity is suggesting. But maybe - just maybe - if they scoop the Mercury Prize from Grimmy on 29th October, then J and T will drop all that and return to embracing a creative authenticity in the form of making music that’ll continue to make “everyone wanna get up and dance.”

1) The Quietus: Black Sky Thinking - Jungle Clearing: Musicians Who Dream Of Excising Their Google Traces
2) Pigeons & Planes: Jungle interview discussing friendship, self-censorship and the mystery that they never intended
3) New Statesman: Review an interesting book entitled Faking It: the quest for authenticity in popular music
4) Guardian: Wu Lyf: better the devil you don't know
5) Visit our Mercury mini-site, in partnership with Naim Audio's mu-so wireless music system, for more coverage of all of this year's nominees