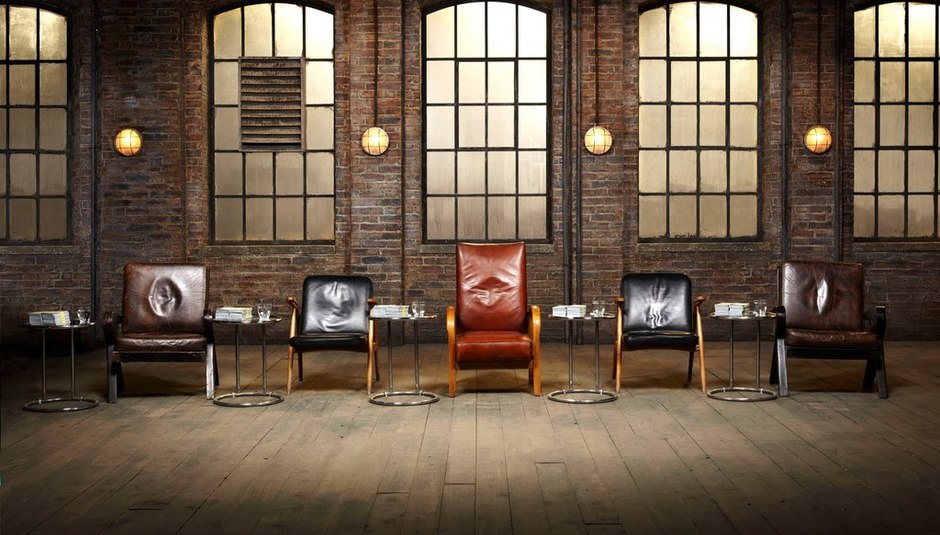 What the hell am I doing here? Thom Yorke on Dragons' Den - The Transcript

What the hell am I doing here? Thom Yorke on Dragons' Den - The Transcript

Evan Davis: Welcome to Dragons’ Den. First to face the dragons this week are Thom and Nigel from Oxford. They’re here to ask for investment in their radical new music distribution scheme which they believe could be more successful than Napster, Spotify, Neil Young’s Pono and even CDWOW.

Thom and Nigel enter the den. Thom is wearing scruffy jeans, a dishevelled head of greying hair and an Aphex Twin t-shirt (I Care Because You Do, not SYRO). Nigel’s got a suit on. Thom is staring at the floor, fiddling with his stubble, muttering under his breath in a high-pitched voice and making the odd bleeping noise.

Deborah Meaden: (raises her eyebrows, as if to say “I’m already more out than Captain Oates’ final breath”)

Nigel Godrich: Dragons, I must apologise for my colleague. The only way he can cope with his crippling social anxieties is to pretend he’s a robot. But a robot with feelings.

Deborah: Sorry, can I just stop you there. A robot with feelings? That isn’t a robot.

Nigel: Then an android, maybe? Can androids have feelings?

Nigel: Believe it or not, dragons, he’s the brains behind the whole outfit. This is Thom...

Nigel: ...with a silent ‘H’. And I’m Nigel. We’re here to ask for a twenty bazillion pound investment in our music distribution platform in exchange for half-a-per cent of our business, a wood block signed by Phil Selway, and a second-hand Tim Buckley LP.

Nigel: Thanks Duncan, I’m loving your inconsistent Irvine Welsh phonetics. We’re hoping to launch a new version of BitTorrent to distribute the next Thom Yorke solo record. The Torrent files have a pay gate to access a bundle of files. The files can be anything, but in this case is an “album” (mimes the inverted commas). If it works well it could be an effective way of handing some control of internet commerce back to people who are creating the work. Bypassing the self elected gate-keepers, the sharks...

Nigel: Well, not every dragon. If it works anyone can do this exactly as we have done. The torrent mechanism does not require any server uploading or hosting costs or cloud malarkey. It’s a self-contained embeddable shop front. The network not only carries the traffic, it also hosts the file.

The file is in the network. Oh yes, and it’s called Tomorrow’s Modern Boxes.

Duncan: Why don’t ye jist gie the album awae fir free, like U2?

Peter Jones: U2? I love U2! Them and Hamfatter. Have you heard Hamfatter?

Duncan: Wha are yir fuckin credentials? Who exactly am ah investing in here?

Deborah: And what about you, Nigel?

Nigel: I produce all of Radiohead’s records. I also did the worst Pavement album and The Sound of McAlmont and Butler.

Nigel: Bucket loads! That’s the beauty of it. Those muso fanboy dupes will buy anything this moping paranoid android puts his name to. They even paid money for In Rainbows on MP3, when they could have had it for free, and then bought it again a few months later on CD and vinyl. And it was a rubbish, uninspired step backwards! Ha!

Nigel: Relax dragons. That’s just what Thom tells himself to make himself feel better about the millions of pounds he makes every single second from ‘Treefingers’ royalties. He learned that from Michael Moore, Naomi Klein and Bono.

Peter: Bono? I love Bono! Him and the singer from Hamf...

Nigel: We’ll make a killing from those nerds on the Drowned In Sound message boards alone.

Deborah: What about the ones who post mean things about Thom Yorke whenever he does anything, and then start insanely contesting that Radiohead pale in comparison to Mansun, Wild Beasts and Mew? What about the malicious critics with their spitefully negative reviews? Or the ones who’ll write painfully unfunny spoof scripts vainly attempting to satirise your creative and commercial endeavours?

Nigel: Well they’re even bigger twerps that our fans, thinking that they’re giving us a good kicking when all they’re really doing is fuelling our publicity and profits. Plus, they’ll never be as hilariously disparaging as Steven Wells.

Nigel: (places hand on Thom’s shoulder) There, there, you sentimental old automaton.

Peter: Let’s cut to the chase. Is there anything on this record that’s anywhere near as artistically challenging as Levi Roots’ Reggae Reggae Sauce jingle?

Peter: Could we sell many Hamfatter records via BitTorrent?

Peter: Then I’m out.

Kelly Hoppen: I never invest in anybody but I’m going to say something simply to justify my BBC pay packet. Can I just ask, is Flea from the Red Hot Chili Peppers involved? My daughter and I think the Chilis are really rather funky indeed. We like to have a jolly good jitterbug to them as we calculate all the money I’ve made by hawking wallpaper to the nouveau riche.

Nigel: We have yet to secure the involvement of Flea.

Nigel: (presses play on his Apple Mac. The music sounds much like The Eraser, so better than Radiohead’s last couple of efforts, but not by much, and it’s still pretty boring)

Deborah: Gentlemen, let me tell you where I’m at. I like the idea. I don’t mind the absence of this Flea character. I can’t say I enjoy your music much. I’m far more into post-new-rave half-krunk vaporcore these days. That doesn’t matter though, as long as we can flog this crap to enough gullible suckers. So I am willing to invest the full twenty bazillion pounds but I’d need a little more than half-a-per cent, Phil Selway’s wood block, and a Tim Buckley LP.

Nigel: We could throw in a Jeff Buckley LP?

Deborah: I want fifty per cent of your business, complimentary backstage tickets for the next Flying Lotus tour, and can you absolutely guarantee me an arty promotional video in which Thom shuffles far too close to the camera like a semi-sentient chimp and then does a bit of a faux-mongy dance?

Nigel: Way ahead of you, Debs.

Deborah: Well then gentlemen, you’ve got yourselves a deal.

Evan Davis: So there it is. Thom and Nigel have pulled off yet another half-innovative marketing gimmick. They’re cracking open the champagne and I’m pissing off to Newsnight to do some proper journalism. And when I say proper journalism, I mean interrupting my interviewees before they’ve had a fair chance to explain themselves. Goodnight, losers. Enjoy Tomorrow’s Modern Boxes. It’s full of claustrophobic oscillations and ominously existential vocal tics, apparently. 7 out of 10, yeah?