Nine years after Lookaftering, her last album of new material, legendary British singer-songwriter Vashti Bunyan returns with a new LP. Recorded largely in her home studio, Heartleap is a unique collection of ten songs forming what Vashti is adamant will be her final album. Here she talks about the lyrical and musical inspirations behind the songs...

Remembering about feeling down and wandering - not focused on anything much - staying up until sunrise and sleeping late 'til the days are lit by the moon'. The first verse is about being stuck and the second about becoming unstuck. The strings were recorded in two places – each recording (played by Fiona Brice, Gillon Cameron and Ian Burdge) had a different quality and so I put them together to make for a more far-reaching sound. The kalimba part is real - by Jo Mango - but mixed with a synth to give it a watery feel.

Following on from Across the Water - a song telling myself to get up and get on with it - not to sit around sighing and growing roots. Uh oh. A dear friend had once said to me that I must not worry about him as he was only as miserable as he wanted to be. I put him in the second verse - miserable wouldn't fit and became 'sad' - and I realised I did not want to just be sad.. 'like trees who stand round in freezing fog just waiting for the spring to come for me'. 'Oh no oh NO'. Devendra Banhart and Andy Cabic - dear friends - added their uhoh's and ohno's - one in New York and one in Los Angeles.

I did glimpse her through a slightly open door as she danced - believing herself alone. I did hear her through a slightly open door as she played an old piano that my father had bought from the junk-shop around the corner. She sang old remembered songs falteringly but beautifully. Instead of telling her how lovely she was I stole away. I feel for her that she never had the chance to be a dancer or a singer but was always a dutiful wife and mother. I have the chances she never had. I tried to make the piano part reflect the old out-of-tune sound of that piano - and the strings to convey the conflict I felt – some are real and some are synths. The piano part is made up of three tracks played with one hand as I can’t play piano.

Built on a round of four different instruments, starting with a recorder and building layer by layer with additional synths – again mixed with real stings in places. A song about how somebody's silently frowning disapproval can make you drown your own self - and that asking for help can sometimes be perceived as a lurking danger, the drowning girl in a pale blue flouncing dancing dress can be mistaken for a Portuguese Man Of War. I extended the guitars at the end as I had so enjoyed playing this with Andy Cabic - and Gareth Dickson (who contributed other guitar parts throughout the album) - and didn’t want it lost amongst all the rest. Yes I know the Portuguese Man of War is not strictly a jellyfish - but by time I found that out it was too late.

'In the telling of your story - there is so much that's lost' .. and a person who has been deeply hurt as a child can sometimes be quite unreachable. I nearly didn’t include this song as it can so easily apply to quite a few people who are close to me. Amongst all the guitars and synths is a real lonely saxophone - played by Ian Wilson.

Another song that had been put in the trash a few times – until eventually I pared it down to the only parts that seemed to matter. It was originally longer and with more tumbling tinkling parts – but a lesson learned from Max Richter was that I should not ‘over-decorate’. Again I don't want to say who this is about - only that this person affected me with the hardship of his childhood and the courage with which he began to trust again.

This song was written and recorded 7 years ago in Los Angeles when I first tried getting to grips with Pro Tools. (I had also just bought a 1972 Gibson J50 which I still love even though its intonation is a little dodgy and cannot be fixed.) It is about an ex-partner with whom communication can still be tricky - 'I can never learn my words, watching them turn around - burning - lighting the gunpowder trails that you lay... I blow my chances..' Every time.

I had a faded poem stuck to the side of a speaker - I'd written it years ago. When recently I tried to put it to music I failed - and then something made me go through old hard-drives to see if I had ever tried to make it into a song. I found old Cubase files that would not open on recent laptops - but I tend to keep things and sure enough an old black Mac in a cupboard kindly fired up and showed me that I had once made a whole piano arrangement for those words. Words I had written when the house was still full of kids yelling and thundering up and down stairs. Everything is quiet now.

He is here. The fear of a person leaving is always there – ‘I watch the horizon for clouds to appear.’ It didn’t need many words – a lot of it is hummed in layers. Then at the end I stitched together a real dulcitone and two synth celestes – to make it sound like a musical box. Each note put in place as if on the cylinder of a musical box. It took a while.

My daughter Whyn Lewis’s painting that graces the front cover of Heartleap is called ‘Hart’s Leap’. I was gazing at this painting on my screen one day last March and a song came to me, made me pick up my guitar and there it was. Some songs take a while to work on, craft and graft into shape, but this one was ready made and says all I ever wanted to say in a love song – about the cycle of joy and loss, heartbreak and heart leap. I recorded this one quickly – before it could escape. Then added some piano notes – and a ‘clarinet’ with each note extended into the next. It could not be played by a real clarinet. Being given permission to use Whyn’s painting for the cover and change the title to Heartleap has been a great gift.

‘Heartleap’ will be released on FatCat on October 6th 2014. 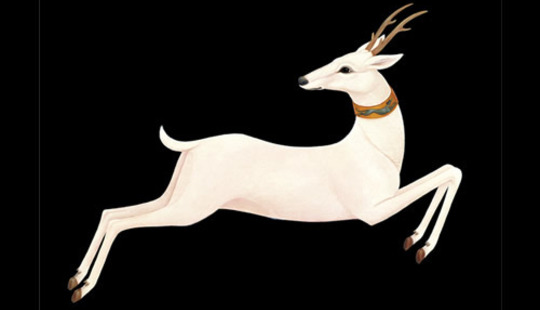 What the hell am I doing here? Thom Y...