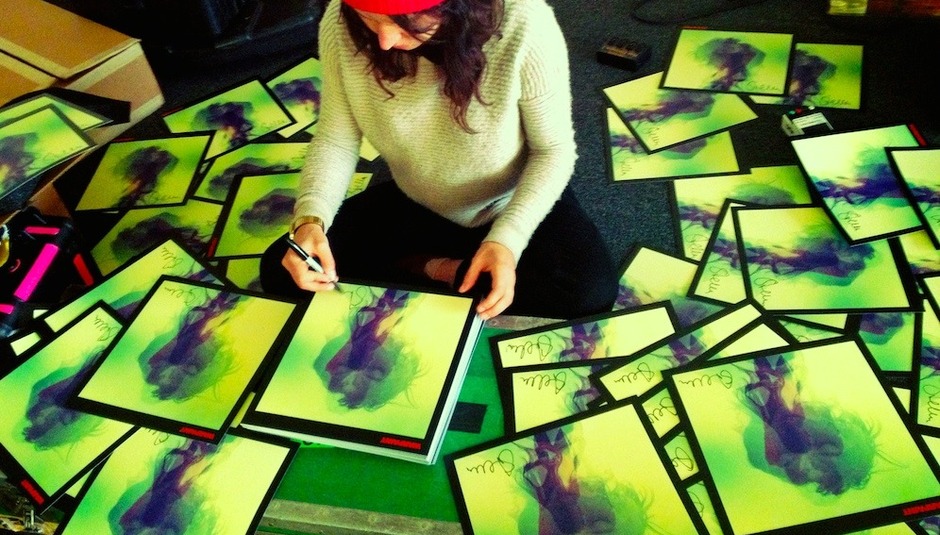 Transgressive records founders Tim and Toby are good friends of DiS. We say "friends", but thinking about it, since starting their label, if you add up all the brief encounters at festivals and gigs, we've probably only seen them both for a total of two hours. It's totally understandable that we've not seen them as they've been incredibly busy over the past ten years, releasing records by the likes of Foals, Regina Spektor, and The Shins, to name just three. The pair are a great combination, with a mighty fine set of ears and a knack for discovering, nurturing and championing a range of acts, the majority of whom have gone on to have great success.

We've known Toby since he started Rockfeedback, as it was one of the only sites ("blogs") on the web when DiS started 14 years ago (he beat us to having up a site up by a matter of weeks, if memory serves...). By "known" we mean, chatted on AOL Instant Messenger about bands we liked until one of us had to disconnect from the dial-up modem so our parents could use the phone. Surprisingly, Toby's enthusiasm for music is still as infectious as the first time I spoke to him. Here's an example of that giddy lust for music from Rockfeedback TV's coverage of Field Day 2007:

We have also known his label co-founder Tim since seeing his band Ship's A Goin' Down support DiS Records' Redjetson well over a decade ago. We then kept bumping into him at early Bloc Party shows (he released their first single via his Trash Aesthetics label). We'd like to take this opportunity to embarrass him by embedding a track of his old mathy post-rock band, but they were actually very good and we can't figure out how to embed this from the new MySpace anyway...

Anyway, as part of the Transgressive label's 10th anniversary celebrations, which culminates in a big ol' show at the Barbican in London next week (featuring Mystery Jets, Johnny Flynn, Marika Hackman, Dry the River and more...) we asked the duo to make us a mixtape to mark this landmark in their life.

On side one they rummaged through the label's archive for lesser known gems and for part two of their mixtape, the decade-old label founders talk of the ones that got away...

...a bit of a clanger on our part! Alarmed at our rapid conversion from occasional seven-inch vinyl label, to full-on, international album-releasing-record-company, we ditched an offer to release Cornelius’ INCREDIBLE album, ‘Sensuous’, in the UK, for the simple fear of not doing it justice. I had a sinking feeling at the time that practicality was outweighing the heart, however, didn’t (and would never want to) short-change an artist from experiencing our full attention and commitment. In any event, this kaleidoscopic, cosmic rush of electronic goodness is as fresh now as it was all those years ago.

Laura guested on early singles with The Rakes and Mystery Jets back in the mid-‘00s, however, quickly forged a path of her own. I first saw her perform live at everyone’s favourite London hovel, the Barfly in Camden. She played solo and must have only been about 16. Even then, that impeccable voice shone through, underpinned with understated delivery and a refreshing lack of showiness in a scene that – at the time – was rife with brash stabs for attention. To this day, she surprises and enchants, whilst keeping it natural. Her duet with Johnny Flynn on his single ‘The Water’ remains one of my favourite songs that we’ve ever released on the label.

Metronomy’s manager Stephen Bass – who co-founded the excellent Moshi Moshi label – came over to our second (and then-dilapidated, slug-trailed) office in Holloway Road one afternoon to play us demos of what would become ‘Nights Out’, the second album from Joe Mount aka Metronomy. Even in its rawest form, it was astonishing. Joe had remixed ‘Weekends & Bleak Days (Hot Summer)’ by The Young Knives for us, which became one of Erol Alkan’s favourite tracks to drop at his seminal club-night Trash, and from that moment on, we were smitten. It’s a cruel shame that we never progressed talks at the time, as Metronomy are clearly a magical thing. In any event, they soon found a wonderful home in the shape of Because Records.

Since we started, one band we all agree that we have loved since very, very early on is Wild Beasts. They seemingly exist in their own palette and expanse – four very amiable, hard-working creatives who sound otherworldly, and yet timeless in the process. They’re a band that I’m always excited to hear from, and who I think will be around for years to come.

(From the EP, 'Exquisite Corpse')

Again, not unlike Wild Beasts, I never know what I’m going to get from Warpaint. To me, they’re a perfect band – as exploratory as they are melodic, as intense as they are wry. I’ve never seen the same live show performed twice, which is a rare thing these days. They’re on their own track, and I’m following them wherever they want to go (in a non-stalker way, of course).

I’ll never forget the rush of excitement that greeted fellow Transgressive co-founder Tim when he rushed in the office with CDRs of all the early Odd Future stuff, before it all went bananas (resulting in a suitably crazy major label deal). Of particular note was Earl’s material – intelligent, hilarious and considered, often in the same breath. His eponymous mixtape really stood out at the time, and still stands up four years on.

I first saw Haim at SXSW and was immediately bowled over. Three potty-mouthed sisters who threatened to snog the entire audience, had massive anthems-in-waiting, and unleashed an arsenal of killer guitar solos. Little-known fact: we actually shook hands on an EP deal with Haim – until a friend of theirs put their hand up for the release… instead of pressing the point, we let fate take its course. You have to let these things play out sometimes; life’s short!

Our good friends at Sub Pop snapped up this hip-hop tour de force. Some of the most inventive flows we’d heard in some time on their debut LP, ‘Midcity’, courtesy of Daveed Diggs. Industrial, noisy, powerful stuff.

(From the LP, 'Annabel Dream Reader')

Erstwhile Brighton resident and general all-round dude Steven Ansell from Blood Red Shoes first tipped us off on this three-piece. He was right to. The Wytches are one of the standout bands right now – their live shows are increasingly captivating, and their debut LP totally captures the magic, and pushes it somewhere else. Good guys, too – they’re not at all interested in industry bullshit or trends, which is extremely refreshing. Seriously, if I meet another band that craves media training or knows more legalese than their own lawyer, I might jump out the window. Fortunately, our final choice doesn't fit in that category either…

(From the LP, ‘Champagne Holocaust’)

Violent, hilarious, idealistic, fed up, literate, debauched… The Fat White Family are the greatest British rock ‘n’ roll happening in over ten years. Instead of signing with an existing indie or major, however, they set up their own record label – Without Consent, named after one of their debut album’s standout tracks. They’re currently the greatest live band on the planet, bar none. The challenge: keeping it together long enough for the rest of the world to catch up.

If you missed part one, featuring 12 classics from the Transgressive vault, click here.