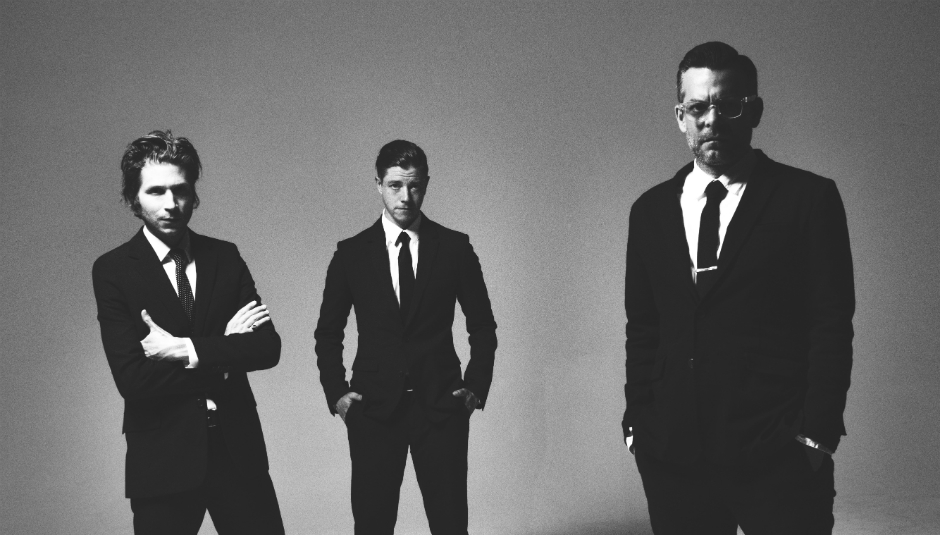 DiS Meets Interpol's Paul Banks: 'One has to suffer for one’s art. But not that much'

DiS Meets Interpol's Paul Banks: 'One has to suffer for one’s art. But not that much'

Call it a comeback. Call a continuation. Call it El Pintor.

Opinion may be split on the context behind Interpol’s fifth album, but everyone seems to agree on one thing about the LP: it’s great.

Here at DiS, Dom Gourlay declared it to be the perrenial miserablists’ ‘finest record in a decade’ in a rave 9/10 review, while both ‘All The Rage Back Home’ and ‘Ancient Ways’ have been bestowed with our prestigious Single Of The Week award. We also popped down to El Pintor’s launch show at New York’s Metropolitan museum.

In other words, there was plenty to talk about when we dialled up the other side of the Atlantic last week for a quick chat with Paul Banks. Having already had guitarist Daniel Kessler sketch out the story behind the record, we were armed with some follow-up questions of our own and a few from you, our right minded readers. Here’s what happened...

Daniel Kessler said that you volunteered to play bass from the off when writing El Pintor, why was that?

Because that I found that I couldn’t come up with any ideas for guitar parts or vocals without a bassline, which was an interesting discovery. I used to sing off of the bassline and take my queue from what it was doing in terms of the mix. More than that, it was deciding what chords you end up playing - it was hard to get my ideas before we committed to using a C or an F.

And Brandon Curtis played while you recorded El Pintor too. Do you think you’ll continue as a three-piece?

Who knows? I feel like that was a spontaneous decision. It came to pass pretty naturally without too much, ‘let’s get somebody, let’s not get somebody.’

We had three day's rehearsals booked and they would have been a waste of time unless I brought the bass. I brought the bass, and then we were off and running. We didn’t decide to interrupt the flow that we’d created by finding someone else to go and play with us.

The album seems to reflect the way it was created. It’s taut and to the point.

I think Daniel introduced a batch of pretty tight, concise rock songs this time. Whereas on our fourth record he introduced some leftfield, more experimental music. So he was writing more direct songs and I had every interest in maintaining that direct quality of the music. It’s pretty much we were of a like mind in wanting to do something punchy...

Was that because you wanted a change from the way Interpol sounded?

It’s more about the absence of Carlos. On the last record we were exploring songs that were already left of centre and Carlos was consciously pushing them even further to the left with his bass and keyboard arrangements. Now you’ve got a new record with Daniel writing more direct songs because that’s where he’s coming from at the moment. You don’t have Carlos two degrees to the left and you do have me happy to push them forward in that kind of direct way. It’s really a combination of one guy’s input not being there and mine being in harmony with Daniel’s.

Blue Supreme’ is one of our favourite songs on the new record. This is a bit of a punt, but is it about a midlife crises?

It could be. It’s not me feeling like I’m having one, but I kind of feel like you could apply that sense of ‘Fuck it. I need to spread my wings.’ I love the word ‘supreme’. I like the image of the American road trip a lot, but also how that particular phrase can evoke more of a metaphorical state of mind than an actual automobile, although it can kind of be both. That just came in the studio one day and I was like, ‘Huh.’ And then I had to check nobody else had written it before.

What was the inspiration for dropping the f-bomb straight away on ‘Ancient Ways’?

I had the vocals done pretty early on in rehearsing. I think that had to do with… swear words come off the tongue with an energy no other words can encapsulate. I do like swearing in songs.

You did a rap song last year called ‘Quite Enough’ with EL-P. How did that come about?

I went to his home studio to check out a track he wanted me to get on [‘Works Everytime’], so we just discussed what music we were working on. That was a great year for him with Cancer for Cure and the Killer Mike album. I was on tour when I sent that beat over to him for the final take. We go back a decade ago, he’s a good dude.

How has having gone to university and got a degree affected your experience of the music industry?

It hasn’t had a bearing on my experience in the music industry. It has had a bearing on my life and the kind of person that I am. It was something that felt important for me to get that degree, in a symbolic way - although an undergrad English [and Comparative Literature] degree isn’t all that specialised. People who have a knack for the business side of the music industry often have an innate knack. With someone who has great business insight, they could go and study botany and run their own business because they have a natural insight that I do not.

A lot of people form bands when they’re young and skip out that stage of maturity.

Have you been approach to make film soundtracks, either solo or as part of Interpol?

I have bros who make films and I’ve done a little bit of stuff with them. I’ve had songs in films. I’ve had conservations with my bros and one bigger director that I don’t wanna blow him up. But there’s one dude who’s expressed interest in me scoring a film but it just hasn’t come to pass yet. So sub-Hollywood bros and a Hollywood bro.

I’d love to do it. The last time really consciously remember being affected by sound design and scoring was a film called Sunshine and a film called Moon - that’s a fucking modern classic.

What are you reading at the moment?

I just picked up Kurt Vonnegut’s Breakfast Of Champions, which I've never read before. There are certain authors that I was trying to read as much of as I could and I exhausted all the Henry Miller that I could find, and he remains my favourite. I’m on a wave length... his joie de vivre and what he was about as a dude just spoke to me as a very adventurous soul who was just living life to hilt. Plus, having unbelievable insights on the human condition. I just like that autobiographical loose tone and I think if I were ever to write, it would be more comfortable in that spoken, honest, descriptive way of Bukowski or Miller. Whereas I can’t even conceive how Dostoevsky or one of these greats could create a world. That’s like building a cathedral with no engineering skills.

I don’t have one and that’s because they’re not these things that I created by myself and I can say yeah, ‘I fucked up, and this one was better.’ I don’t feel like me or the other dudes made one record that was less good or honest or sophisticated than the other ones. I’m very fond of all of those albums. I had a harder time making my contribution to some of those records than others but putting one below the other feels like I’d be putting Daniel and Carlos’ work below the others.

What an album you struggled with?

Our Love To Admire was difficult for me with my vocals. That one was maybe a bit of a mis-hit, but I’m proud of that record because it’s really important to know what works and what doesn’t. There were certain things that I was implementing in my process that didn’t work. One has to suffer for one’s art. But not that much. That paid off a lot actually. I’m a much more productive and my creativity is much more unimpeded than it was. I’ve managed to pick off certain obstacles that upset my creative flow and I wouldn’t have been able to do that if not for album three.

El Pintor is out now.