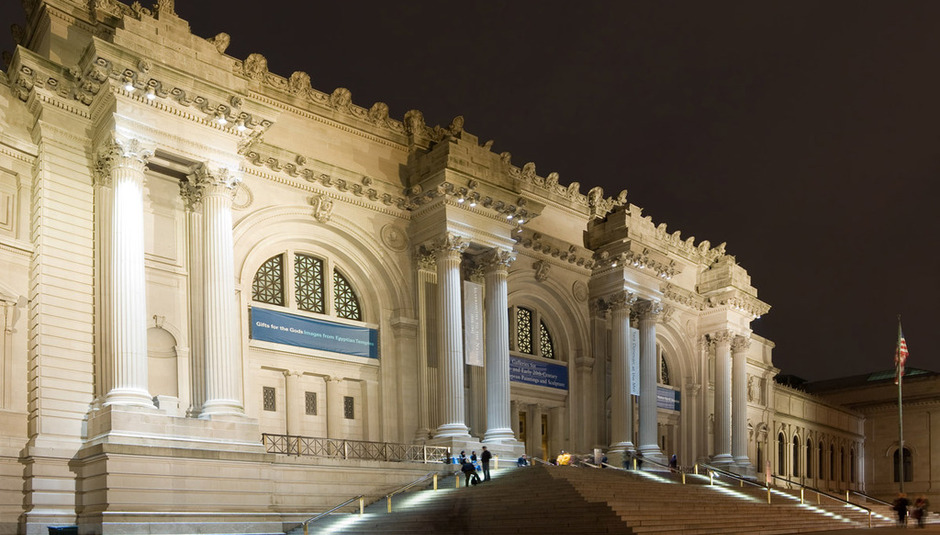 DiS sent New Yorker and long-time Interpol fan Karen Ruttner to the Metropolitian museum for the launch of El Pintor...

It's an age-old discussion... actually, it's not, and it probably isn't of much import outside the circles of turn-of-the-millennium NYC barflys (hi!) and the music fans who love them, but I think it's safe to assume that anyone reading this falls into one of two tribes.

A little over a decade ago, downtown New York could be divided into two (not entirely distinct) sects. 'Who's team are you on?' On one side you'd find the friends, family and fans of the Strokes, and on the other, the same clan for Interpol.

Ask a casual music fan who the bigger of the two is, and they will probably say the Strokes - who have headlined more festivals, their logo's been appropriated on far more bootleg merch, their name synonymous with "early-2000s rock n' roll cool". As a student in Manhattan in the early 2000s, I was all about partying to the first Strokes album. My dorm-mates and I would put Is This It on in the kitchen, crack open a bunch of tall-boys and dance around while getting ready to hit the tiles.

But, when the time came to wind down, to be reflective, to be alone - I always reached for Interpol.

In many ways, Interpol was New York's "thinking man's" foil to the Strokes' party monster. The dark grooves and oftentimes indecipherable lyrics of the former suited the confused atmosphere of post-9/11 NYC to a tee. The Strokes were escapist, Interpol was reality.

Now here we are, 12 years after the release of Turn On The Bright Lights, and Interpol are celebrating the release of their fifth LP, El Pintor, with a gathering in the Metropolitan Museum of Art. Regardless of questionable acoustics and a bevy of anxious security workers, the setting couldn't have been more perfect.

The Met is a New York institution admired by art-loving locals and tourists alike. It's grand in scope, eclectic in curation, and absolutely beautiful. How fitting then that the hundreds of people in attendance were toasting wine and champagne to this other majestic New York institution, Interpol.

12 years is a long time in band-life. The Interpol of 2014 is representative of the changes that often occur over a span like this - streamlined lineup, sharper suits, more complex and layered songwriting. These are all markings of maturity, which again, is why setting this event in an art museum was so appropriate. One almost has to wonder if Daniel, Paul and Sam had this idea in mind when they first joined forces all those years ago. The unabashed joy on their faces as they played a career-spanning 14-song set, awash in colored lights and in the shadows of the Temple of Dendur, was so uncharacteristic of their usual staid selves. Paul literally could not stop smiling. And neither could I.

I feel like I've grown up with Interpol. When I first met them, we were all denizens of a Lower East Side scene that preferred darkness to light, slinking around dank bars and talking about absolute fucking nonsense. Back then, the ideal settings for Interpol shows were places like Brownies and Maxwell's - i.e. shitholes that reeked of booze and bad decisions. We might have thought we were adults, but let's be serious... Our immediate world was crumbling around us, and the only solution was to wear black and act reckless. Now, the world may still be crumbling, but we're old enough to compose ourselves and appreciate what we've got.

It was wonderful being in a room full of monuments, surrounded by familiar faces from the New York scene, drinking wine and singing the songs that have soundtracked our lives for 10+ years. You could tell the band was honored to be playing in the space, and the crowd was honored to bear witness.

The Strokes can have their headline slots at festivals, their bros in backward hats fist-pumping along. They were always more party than serious, more collective than introspective. Interpol feels right in a museum. Their growth from universal bleakness to something far more complex mirrors a mood in New York that is inarguably important to the development of music and culture in general, and for that they deserve this pedestal, these diehard fans, these drunken shouts of "I fucking love you" (ok, sorry, that was me that shouted. Maybe I haven't matured quite as much as I'd like to think).

Untitled
Leif Erikson
Length of Love
My Desire
Hands Away
Narc
Lights
All the Rage Back Home
Take You on a Cruise
Lighthouse
Same Town, New Story
Not Even Jail
Say Hello to the Angels
NYC