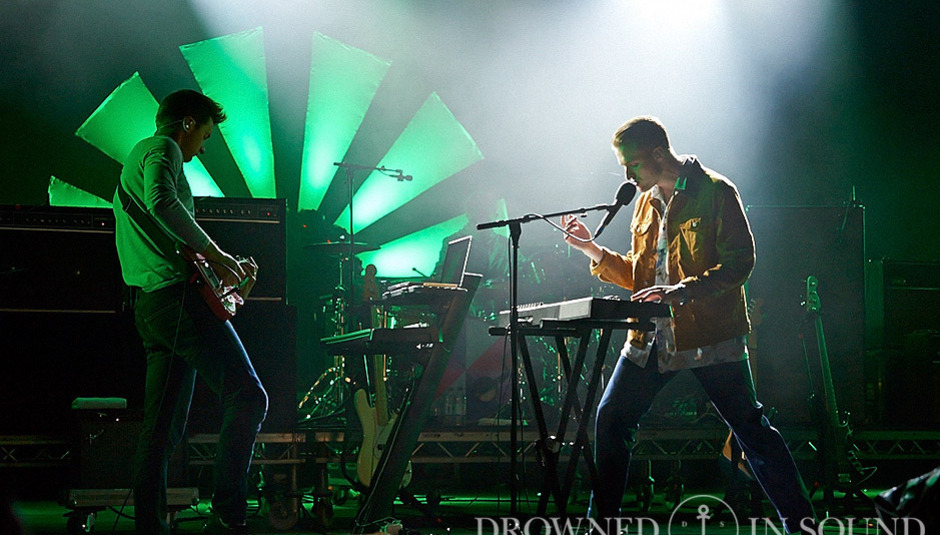 With so many festivals to choose from in what's become a heavily saturated market (not to mention those fallen by the wayside), the need to have a USP or niche of one's own is more important now than ever for such an event's longevity. Thankfully, End of the Road can boast several. Situated in the ornate, countryside settings of Larmer Tree Gardens on the border of Dorset and Wiltshire, it might be a trek and a half to reach but every hour spent queuing on the M1, A43, A34 and A303 proved well worth it.

Although still relatively new in festival terms – the first End of the Road was held in 2006 – it's one of the few events of its kind to regularly sell out in advance. No mean feat in the current climate. However, with so many attractions for the discerning punter to choose from - the recycled musical instrument workshop of The Rig and 'Where Is My Mind?' music quiz being personal favourites - not to mention the Healing Field, Cinema, Singing Theatre and Croquet too.

And then of course there was music. With such a mouth-watering line-up, End Of The Road managed to usurp most of its rivals both at home and abroad. Thursday night began with a couple of secret sets, the first of those coming from London-based shoegazers Cheatahs. Having released one of this year's finest debuts, their live set proved an explosively triumphant introduction to the weekend's festivities. Drawing mainly on material from said record, Nathan Hewitt and co's eloquent fusion of melody and noise is a joy to behold culminating in a raucous run through recent single 'The Swan' at the finale.

Former Harpoons frontman Ezra Furman also packs a solid punch and the Tipi Tent for good measure. Complete with current backing band The Boy-Friends, Furman rocks out relentlessly for an hour, stopping only briefly to introduce his fellow musicians before throwing in a cover of Madonna's 'Like a Virgin' for good measure. So far so good.

Friday morning's talk is about who the secret guests muted to play across various stages might be. Not that Mazes' Jack Cooper cares one iota. Racing through 30 minutes' worth of scuzzy, lo-fi grunge pop, he seems genuinely humbled at the large turnout in the Big Top stage's opening midday slot. The Wave Pictures are a revelation on the Woods stage too, even if the brief downpour that greets the second half of their set sends several punters scurrying for cover into the bars and boutique stalls nearby.

The Wytches' analogue Nirvana schtick coupled with Black Lips engaging greatest hits set are timely reminders that rock and roll can be both retro-themed and excitingly fresh. Unfortunately, the faux sentimentality of Jenny Lewis grates somewhat and as a result, DiS looks elsewhere for its early evening kicks.

We needn't have ventured far, as British Sea Power live up to their title as the most consistent band in rock with admirable vigour. Their career-spanning set attracts the largest crowd of the weekend so far, the words of 'Carrion', 'No Lucifer' and 'Remember Me' reverberating from front to back of the Garden Stage, even if Yan Wilkinson appears to have forgotten the first verse from the latter. The all-star Gene Clark No Other Band are a revelation too, not only providing End Of The Road's first real 'festival moment' but also showcasing each individual component's remarkable talents to boot. With a cast made up of members from Beach House, Grizzly Bear, Wye Oak, Celebration alongside former Walkmen frontman Hamilton Leithauser and one-time Fairport Convention singer/songwriter Iain Matthews they're a sophisticated force to be reckoned with. Taking it in turns to deliver the late Clark's 1974 No Other opus in full, there isn't a dry eye in sight as the collaboration becomes a unified whole for an emotional reading of The Byrds 'Eight Miles High' during the encore.

It's minor comforts such as the close proximity of the stages that makes End of the Road an enjoyable experience. Bearing this in mind, the first part of Saturday is spent circumnavigating the Garden, Big Top and Tipi areas where the sultry tones of Lily and Madeleine, Adult Jazz's experimental post-gaze and leftfield folk trio Lau (complete with 'I Love the NHS' backdrop") set the scene in resplendent fashion for what follows.

London art rockers Arrows of Love remind us of a less trippy, harder riffing Butthole Surfers before Sweet Baboo soothes one and all with his customary sentimental odes to girl-meets-boy-and-falls-in-love. With the Mercury Music Prize nominations imminent, one surefire candidate has to be Eagulls, and their lively set ensures the front third of the Big Top resembles a writhing moshpit for the entire duration of their 45 minute slot.

Flawless line-ups like this make billing clashes inevitable, so we're torn inconsolably between Perfume Genius, The Horrors and Hookworms. DiS opts for the first two having been informed the latter are playing a second set at 2am (which doesn't take place due to technical issues) and while disappointed at missing Leeds' finest psych rock combo, finds both Mike Hadreas and Faris Badwan in fine form. Each delivering a heady mix of material from both pivotal works of the past (Learning, Put Your Back N To It, Primary Colours, Skying), its the cuts from this year's releases Too Bright and Luminous that resonate the most.

Marissa Nadler's winsome tones make us swoon for more, while The Flaming Lips win the award for light show of the weekend hands down. Nevertheless, it's John Grant's doeful fusion of autobiographical ballads and errant techno that captures the hearts and minds of those out front, culminating in several rounds of applause long after the climactic 'Queen Of Denmark' brings his set to a rousing close. Those in search of late night entertainment need look no further than the Big Top where Archie Bronson Outfit serve up a riot of discordant noise, while Richard Hawley's DJ set in the Woods disco makes us yearn for a time machine to transport us back to the Fifties our grandparents reminisced about.

It may be Sunday and our alcohol consumption has most definitely exceeded the recommended limits but we muster up enough strength to witness Stealing Sheep pull off an impressive performance mid-afternoon on the Garden Stage. Playing a set largely comprising of songs from their forthcoming as-yet untitled second album, there's a distinctly more electronic influence permeating the likes of 'Greed' that on today's showing kind of excites us somewhat.

Punk, poet and recently honoured doctor of the arts John Cooper Clarke causes pandemonium in the Big Top to the extent a one-in, one-out scenario ensues for the majority of his performance. Mixing politically incorrect quips about Alzheimer's disease and Jehovah's Witnesses with customary runs through old staples 'Beasley Street' and 'Evidently Chickentown', he brings the house down and with it, the first genuinely unprepared encore of the weekend. Afterwards, DiS hotfoots it across to the Tipi just in time to see Oliver Wilde's woozy mix of ambient lo-fi, folk-laden electronica and melodic krautgaze where it seems a large proportion of Bristol's nascent underground music scene also preside.

Next up, Merrill Garbus and tUnE-yArDs also kick up a fuss on the Woods stage with their eclectic genre-transgressing fusion, 'Gangsta' and 'Water Fountain' in particular creating a vibe more akin to a Saturday night rather than Sunday teatime. The last time we saw Richard Thompson, four weeks ago at Cambridge Folk Festival, he was nothing short of flawless, and here is no different with the added bonus of a closing duet with daughter Kami and husband James Walbourne (aka The Rails) thrown in.

Having spent the past decade building up to monumental achievements such as this, no one can dispute Wild Beasts have earned the right to claim headline status. Opening with a resounding 'Mecca' off this year's Present Tense long player, they're an assured and confident presence. 'The Devil's Crayon' and 'The Fun Powder Plot' pass by, each a reminder of the impressive wares stored in their back catalogue. Sadly - at least where we're stood - their impeccable performance falls on deaf ears, not a solitary clap emanating from those stood around chatting inanities rather than watching the show. Seemingly disheartened, the band leave after just 55 minutes of their allotted 90, returning only for a poignant two-song encore as cutting ('Wanderlust') as it is buoyant ('All The Kings Men').

The weekend almost over, it's left to psychedelic troubadour Kiran Leonard to bring proceedings to an end, which he does in organically chaotic style. As UK festivals go, End Of The Road is up there with the finest we've ever experienced. Its diverse, all-encompassing, attitude-free nature making it a pleasure to behold. With plans for next year's tenth anniversary shindig already under way, we're already anticipating what 2015's line-up has in store. For now, let's remember 2014's edition for what it was; the highlight of Britain's summer festival season.

In Photos: Other Lives @ XOYO, London