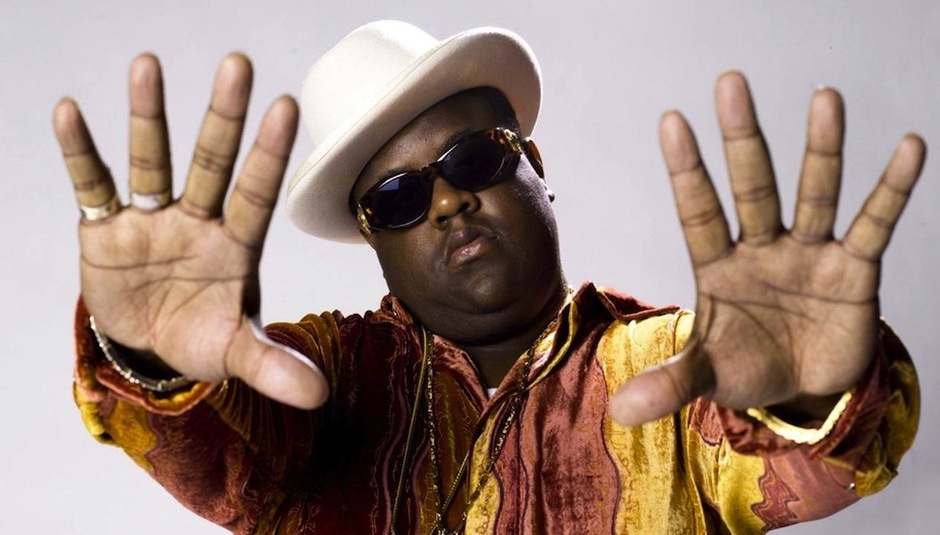 That age old and unanswerable question of “Who’s the Greatest Rapper Of All Time ™’” will be scrapped over forever, but when push comes to shove, the dust can only really settle on a handful of characters, booming amongst them – Biggie Smalls. The Notorious B.I.G.

The list of adversaries is endless: Nas, Chuck D, Tupac, KRS One, Rakim, Big Daddy Kane, Eazy-E, Big L, Andre 3000, Big Pun, Eminem, Jay-Z, and any given member of Wu Tang (depending on the time of day and what you had for breakfast) all contend for the title. Of course, in reality it doesn’t really make any difference - bickering is rife among hip hop devotees and we will never agree - but there is an unavoidable object at the beginning and end of every argument, and he loves it when you call him Big Poppa.

The rasping flow, those “Huh” punctuations, a straight talking Brooklyn swagger and his mastery of lucid rhymes which drip with tension, drama, humour and ambition are etched into the DNA of hip hop. He managed to gather MTV fans without losing any face in the underground, could tear apart rappers in a battle arena and wove together gripping dramas full of tragedy, comedy and violence in sharp, witty bursts of rhyme. When you really listen, there is none of that filler blah that so often hovers between accentuated phrases and hooks. The consistency of delivery and lyrical punchiness is acute and unyielding.

His escapades as a gun-slinging crack dealer and gangster are well documented within the stories of his songs (how much is exaggerated fiction and how much based on truth will never really be known) and his and Tu Pac’s untimely end epitomise the murkiest parts of the genre’s history. His career encapsulates East Coast rap’s purple patch. He is the face of the ‘golden age’ of hip hop; an eloquent crook with murderous tendencies, a story-teller - the late godfather of rap.

1994 was a year at the very pinnacle of hip hop’s success; it and the couple of years surrounding it saw some of the most memorable and important debut’s surface. Along with Ready To Die; Nas’ Illmatic, Outkast’s Southernplayalisticadillacmuzik and underground hero Jeru The Damaja’s The Sun Rises In The East were all released in ’94. In 93’ and 95’ an ongoing barrage of street genius continued with records from East and West coast alike; Wu Tang Clan, KRS-One, Mobb Deep, Eazy-E and Tupac to name just a fraction. Out of all of this material, however, none had the explosive effect quite like the four times platinum Ready To Die, which weaves tales of the streets; social commentary, a soap opera, a sonic portrait of the underbelly of society and the lengths they will go to back in the sun - partly made from observations and partly from experience. B.I.G’s rapping style by this point had fermented on street corners and become a rasping, lucid flow full of punchlines, prose and seamless consistency. It was received with masses of critical acclaim, employed some of the most iconic producers – Easy Mo Bee, Chucky Thompson, DJ Premier, Lord Finesse and “Puff Daddy” Sean Combs – and brought the gazing eye of the public firmly back East from the golden hills of California. It is one of the most iconic records of all time and, although Life After Death was perhaps more poignant in the wake of his tragic passing, Ready To Die single-handedly changed the shape of hip hop and created a legend of gargantuan proportions. Here it is to be scrutinized once again 20 years on.

The record was one of those “right place, right time” deals; landing slap bang in the middle of the 90s plateau of gangster rap. Groundwork in the sound had been done by The Clan, Gang Starr and KRS-One in the years that preceded it, but Biggie’s debut landed and immediately shot to mainstream and critical success while the rest still, to some extent, remained in the shadows (Wu Tang’s 36 Chambers the only to really contend its status, but still very much a cult classic).

The footprint left by Biggie and his debut on later artists is unavoidable; he is one of the most frequently referenced and mythologised rappers, unchallenged in snappy wordplay and succinct, but biting storytelling. Every song from the track acts as a phase, emotion, thought or action of someone living in the poverty stricken areas of Brooklyn, framed within the lifespan of its lead protagonist – Biggie Smalls. The concept is air tight, intelligent, accessible and danceable; a real work of genius hidden under a somewhat violent and crass thug exterior – lamb dressed as wolf.

The record’s brazen introduction initiates Big’s penchant for narrative and plot, building a framework for the remainder of the album to gestate in; a brief history on the product of social greed. It starts at the beginning; a baby is born to yelps of joy and Curtis Mayfield’s ‘Super Fly’. Sugar Hill Gang marks adolescence and petty crime, whilst the “I Get Money, Money I Got” of ‘Top Billin’ plays as background noise to a train robbery orchestrated by Biggie: “It's eighty-seven nigga, is you dead broke? Motherfucker is you broke motherfucker?” Smalls is released from prison and the context is set – a lead protagonist given a life story, emotion, ambition and greed, on top of a brief history of rap and the album’s influences in just 3 short minutes. It is one of the most striking and well thought out intros in hip hop, and one of the very first of the skit tradition to utilise real dramatic worth. It says a lot with very, very little; acting as a snapshot of society presented by the individual – philosophical, Platonic even.

Permeating the entirety of the record are tales of crime and getting paid, how many of the anecdotal references are based on real fact remains to be seen, but they help to illustrate an American gun culture that fatally twined itself to Christopher Wallace. The opening quarter is dedicated to and defined East coast gangster rap; Crooklyn’s hoodlums find their voice in ‘Gimmie The Loot’, ‘Machine Gun Funk’ and ‘Warning’. The former of the three details a scene in Biggie’s late teens where he and an accomplice use guns, hidden by a friend who gets jail time, to ride around the street robbing people: “My man Inf left a Tec and a 9 at my crib/Turned his self in, he had to do a bid/A 1-to-3, he be home the end of '93/I'm ready to get this paper, G: you with me?” spits Smalls in a conversation between himself and a partner in crime (also rapped by Biggie, although it’s hard to believe). His adept talent for writing with tension and intrigue is evident from the early reaches of the album, as is a the ability to pack short, sharp rhymes with power and witty precision: “Big up big up, it’s a stick up, stick up/And I’m shooting niggas quick if you hiccup”

‘Machine Gun Funk’ again hones in on the criminal aspect of Wallace’s life; stories of crack dealing: "Biggie off the street, it's a miracle!/Left the drugs alone, took the thugs along with me” and violence: “Sticks and stones break bones, but the gat'll kill you quicker/Especially when I'm drunk off the liquor/Smoking blunts by the boxes, packing Glocks/It's natural to eat you niggas like chocolates.” The two tracks, along with ‘Warning’ which features a skit of two gangsters trying to rob and kill our narrator, arguing with “Red dots” on their foreheads, are weaved together with cinematic vision as “This rap Alfred Hitchcock” directs a snapshot of Brooklyn streets. It encapsulates the pinnacle of East Coast gangster rap; a violent and inevitable culmination of the observations first made in Grand Master Flash’s ‘The Message’.

There are some moments filled with intimacy and introspectiveness within the record, still shrouded in a culture of gun-slinging and violence, Smalls takes a look at social problems amongst the machismo. Sharply summing up the opportunities for a young person on the wrong side of Brooklyn to make a comfortable living into two options, Biggie spits in ‘Things Done Changed’: “If I wasn’t In the rap game/I’d probably have a key knee deep in the crack game/Because the streets is a short stop/Either you’re slinging crack rock or you got a wicked jump shot.” He also muses on gangland warfare and his mother’s breast cancer in what is one of the album’s more thought inducing outings.

‘Everyday Struggle’ follows in this vein with its hook “I don’t wanna live no more/Sometimes I hear death knocking at my front door”, while ‘Suicidal Thoughts’ finishes the album and closes the concept. Where the intro sees Biggie born, ‘Suicidal Thoughts’ sees him commit suicide – Ready To Die. It plays out like a conversation between Biggy and Puff, Biggie contemplating death, hell and his worth. It completely ties up the concept, adds dramatic tension to the finale and shows an un-characteristically remorseful, guilt ridden side to the character Smalls projects.

Astringently attached to the fabric of the album is a sense of commercial value. To appease his labels Wallace agreed to write some more accessible single releases; the results were Juicy, One More Chance and Big Poppa - three of the most iconic tracks he has ever written. Whether you love or hate the fact that these became club fillers, there is no denying the popularity of them. Even more impressing is the continued lyrical depth within all three tracks, none have been dumbed down - all remain as sharp as any other material from the album. ‘Juicy’ encapsulates his legacy above all, the most easily recognisable Biggie Smalls track bar ‘Hypnotize’, circling the theme of success. Screams of “Drinkin’ champaign ‘cos we thur-stay” can be heard in the smoking areas of clubs from Croydon to Connecticut.

‘One More Chance’ is by far the record’s most lewd offering, but does not shirk on lyrical ability and cutting rhymes in sake of pop sensibility and mediocrity. The tune starts: “When it comes to sex/I’m similar to the Thriller In Manila/Honeys call me bigger the condom filler/Whether it’s a stiff tongue or stiff dick/Biggie squeeze it to make shit fit/Now check this shit.” Crude, yes. Crass, yes. But exhibits that even in an attempt to appease his label and management, Biggie holds sharp tongues and will not compromise style for sales.

Finally, the centrepiece of the album, its title track ‘Ready To Die’ merges the themes of gangsterism and thoughtful introspectiveness. The track encapsulates the aura of the album; hubristic lines about how much paper he’s stacking, snapshots of life in the poor areas of Brooklyn and a less two-dimensional quality that sees Smalls ask questions about society. Among all the seriousness he also produces some of his funniest lines on record; “I got techniques drippin’ out my buttcheeks/Sleep on my stomach so I don’t fuck up my sheets.” Ew.

It’s been 20 years since the release of Ready To Die and 17 since the tragic and premature demise of Biggie Smalls. His music is still as important as it ever was in certain spheres and much is down to this, one of the best debut efforts in hip-hop ever – “Biggie Smalls on a higher plane”.

Sam Willis is taking a break but will return with a new 'Champion Sound' column later in the year. 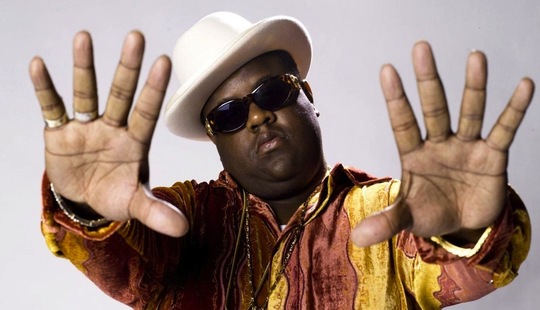