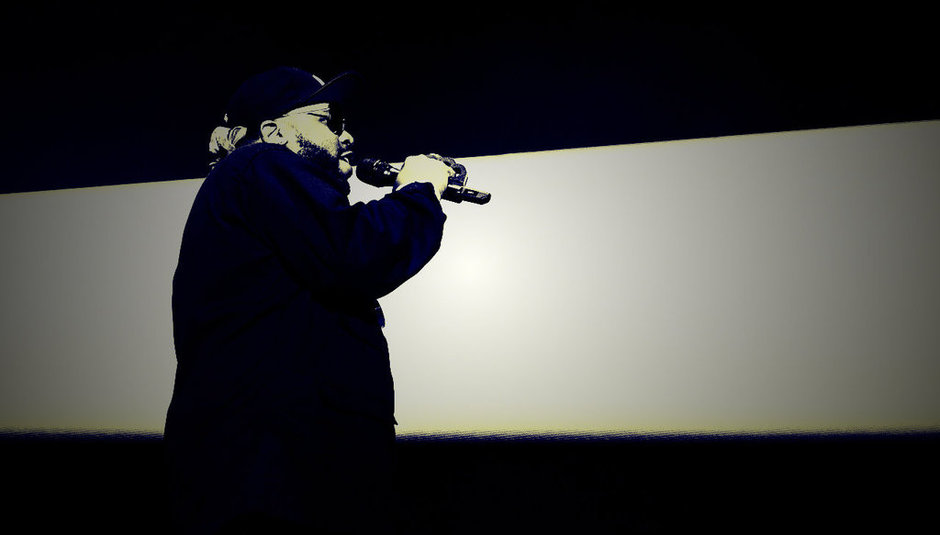 In OutKast’s heyday Big Boi could usually be seen wearing a sports jersey or a comfortable, casual jacket – sometimes both. Andre 3000 sported feathers, furs, dungarees and dashikis. He also wore moon boots, braces and bandanas, dinner jackets, shoulder pads, ponchos, polos and just about any type of hat or wig you care to mention. Having not performed together for a decade, you couldn’t help but wonder how they’d appear in 2014 – Andre’s wardrobe rivalled only by Lady Gaga and Ken the doll. For what is surely the year’s most feverishly anticipated comeback tour, would we see the flamboyant, xenophobia-challenging costumes that made his name? Or the more stylish gentleman’s attire that earned him mainstream adulation and GQ’s Man of the Year award?

Sure enough, Big Boi arrives on stage in a casual black jacket, styled out with a gold chain, green bandana and baseball cap. For Sir Lucious Left Foot it’s practically business as usual – his performance radiating with the simple joy of being on stage alongside his partner. His Instagram account has been populated on tour with excitedly taken snapshots of European cities, festival circuit friends, fan art and selfies. For Andre though, public life is more difficult. With the exception of an infamous Gillette commercial, his appearances over the past decade have been selective and special. In recent years he’s communicated through headline-grabbing guest verses that tend to dominate the song on which they’re placed, such as T.I’s ‘Sorry’ in 2012, on which he apologises to Big Boi for not being able to continue what they started – “I’m sorry I’m awkward, my fault for fucking up the tours / I hated the attention so I ran from it”.

Yet two years later here he is, the reclusive Three Stacks in the flesh, embarking on a 40 date world tour to the obvious delight of his old partner. Andre’s attire says a lot about his frame of mind; a grey wig and white sunglasses – the aging rap star returning to retell his old stories. His plain black jumpsuit is emblazoned with a slogan that has changed on each night. Tonight in Gothenburg it’s ‘I love old people’, but if you’d joined on an earlier date you might have seen ‘I’ve never been to africa’, ‘F#ck 3000’ or ‘umm, you still on yo’ pyramid’. Some of the messages have been overtly political (‘across cultures, darker people suffer most. why?’), while others have been playful (‘fruit snack addict’), introspective (‘loners get lonely too’) or simple (‘breathe’). From inequality to Rowntrees fruit roll-ups and the perils of the digital age, it’s clear that Andre still has a lot weighing on his mind – but it’s how to communicate it all that has proved troubling in the ever-shifting landscape of rap music. Perhaps most poignant, then, is the tag which hangs from his waist – a dollar symbol on one side, the words ‘sold out’ on the reverse.

As a group that transformed rap music at every opportunity in their day, has OutKast sold out by returning to the stage for nostalgia? Who’s to say – Andre and Big Boi themselves would almost certainly have differing views. These conflicts and contradictions, though, are at the heart of their best music, and tonight’s performance feels true to that spirit – and, most of all, true to Andre and Big Boi as people.

For the die-hards, these questions quickly dissolve into the opening twinkles of ‘B.O.B’ – the system on Way Out West’s Flamingo Stage is reassuringly loud as the duo begins with the most energetic song of their catalogue. ‘Gasoline Dream’ and ‘ATLiens’ somehow carry that momentum, before a five-song Aquemini run which is note perfect. So far, so smooth. Perhaps the finer details were lost in my own hysteria, but it seemed that both performers were relishing in the crowd’s enthusiasm. At one point Andre wraps himself up in his own mic cable – I make a note of this later with an eye on making a contrived extended metaphor for his career, but the more likely truth is that he was mucking about. Y’know, having fun.

Moments later though he was having less fun during ‘Ms. Jackson’, and as the pair separates for brief solo sets he returns even more muted during ‘Hey Ya’. As the group’s two biggest songs it would be easy to read this as his reluctance to bang out the hits with a smile – except that these aren’t and never have been happy songs. In essence, they’re both about crushing uncertainty and the sadness of fading love between former sweethearts. They’re miserable stories cleverly tucked away inside the group’s brightest pop crossovers, and that’s beautifully mirrored by this performance. ‘Hey Ya’ is particularly well thought out, inviting a gang of girls up to dance in the centre stage as Dre walks steadily from one side to the other – leaning against the speaker stack as his price tag ripples in the summer breeze. “Y’all don’t wanna hear me, you just want to dance” – his message is right there in the lyric sheet, as he effectively gifts this song to the audience and watches it being performed from side of stage. “Thanks for helping me out” he says to his dancers afterwards, “it’s hard to be the frontman, I know.”

If that all sounds a bit morose for a festival headline set, Andre comes alive on other hits like ‘So Fresh, So Clean’ and an unexpected four (!) consecutive cuts from Southernplayalisticadillacmuzik. Sleepy Brown is here too to lend his vocals and show off an immaculate fitted jacket, and then there’s Big Boi of course, who bounces around the stage throughout with giddy enthusiasm and a child’s grin. His own solo set is full of life, with the likes of ‘GhettoMusick’ and ‘The Way You Move’ faring much better than Andre’s ‘Prototype’ and ‘She Lives in My Lap’. Between songs he makes dad jokes and repeat references to how OutKast is “Swedish Meatballin’" tonight – even Andre can’t resist a laugh the second or third time around. They share another joke over an ‘Eat Pussy Not Meat’ T-shirt in the front row that’s worthy of its own jumpsuit, and for a moment we see their natural rapport at work like two school friends giggling over rude words. I could almost watch them talk this way all night, if not for the comprehensive 24-song setlist that’s squeezed into their hour and a half of allotted time. In terms of songs there are very few major omissions, and a slightly truncated ‘SpottieOttieDopaliscious’ can be forgiven for the inclusion of ‘Int’l Player’s Anthem (I Choose you)’ as the night’s penultimate song.

OutKast spent their creative peak just trying to be heard – for Andre, at least, you wonder whether that battle has been won. This lucrative 40+ date tour certainly shows how well liked the group remain, even if a streak of frustration still runs through their performance. But then, would this really be OutKast without it? The overall tone of the night is celebratory, but you somehow come away feeling as though you’ve been kneed in the ribs as well. Andre and Big Boi introduce ‘The Whole World’ as their final song and dedicate it to people of all colour and sexuality – the screens turn their attention to a mixed crowd dancing happily along. It should be a joyful moment and it is, but then why are my eyes also filled with tears? This is the duality of OutKast at its very best – I'm just glad I got a chance to see it.

Other Way Out West highlights in haiku:

Loud disco downstairs
Will the singer persevere?
A glass drops and breaks