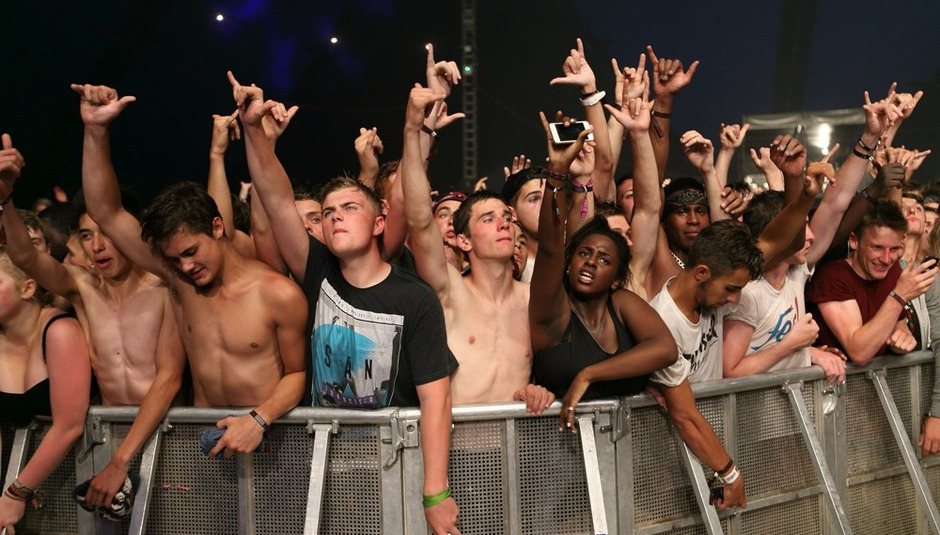 On the August Bank Holiday weekend, the annual beer, sweat and slippery noodle fest that is Reading (AND LEEDS) will once again disrupt the Berkshire almost-countryside with rumbling bass and burning pizza boxes. With bands from all over the world boarding planes to come Bring The Noize, it's time for you to get yourself prepared.

Whilst picking up toilet rolls and wet wipes may be important, so is knowing who to cram into your three days. DiS has compiled a 50-song playlist to get you clued up and even more excited than you probably already are about seeing [insert name of your favourite band] and [them], [and them!] and [oh yeah I can't wait to see them]!

Didn't get a ticket? Don't be emo, watch it live on the BBC.

Before we get to the epic playlist, the six acts you musn't miss are:

It's weird to think what modern rock and pop would be like without JeW. Bleed American (which was renamed in the wake of 9/11) had all of the heartbroken mallrat magic of Weezer and the blistering radio-friendly riffs of Foo Fighters. In fact, it might be a huge overstatement to say that - much like pop-punk behemoths GreenDay - a lot of the biggest hits of the past decade from Taylor Swift and Katy Perry to Postal Service/Death Cab and Paramore owe a lot to this band's rewriting of the pop formula. The inspiration they took from 80s rock-pop acts like Tears for Fears and Duran Duran, and the way they spun it through the pop-punk 'pit may seem a little bit obvious now but something about what they did ricocheted through the ether and affected popular music's DNA. Revisiting their records these past few weeks, the result is still as breathtaking as the first time I heard 'em, and I couldn't be more excited about seeing them again. They play once on the main stage and again later on that evening headlining the Lock Up tent. If you don't catch them at least once, you weren't really at Reading (or Leeds!).

With a bajillion air miles, a kajillion gigs, several day-time radio playlisted singles, and four albums under their belt, the UK's most constantly awesome duo will take to the main stage of Reading once again. Since the last time they hit Reading & Leeds' biggest stage they've left main stage audiences wondering 'how do two people make THAT MUCH noize???' at almost every major festival around the world including Lowlands, Pukklepop, Hurricane, Southside, Dour, and that's not to mention fests in Portugal, Spain, Indonesia, Korea, Taiwan, Hong Kong, Japan, Australia, and New Zealand... They've become one of the UK's biggest exports and now they're coming back to British rock's spiritual home with their assault that will rattle those huge speakers. As one of only two females who'll step foot on Reading's main stage (Hayley Williams is the other lady), Laura-Mary's helicopter-lifting-off riffs will likely be eleven times as loud as the rest of the line-up... and then there's Steven's incredible drumming! Bring it on!

Whilst Reading's line-up this year may be somewhat lacking in ladies, Lizzo and her smart 'n' snarky rhymes and party-starting rhythms will readdress the gender imbalance and then some. If you wanna party, you won't want to miss Lizzo who's so much more than the new Missy/Nicki/etc.

There's a weird sort of buzz around this band. Some say they could be the new Fall, whilst others make them sound as if they've contracted a disease that they refuse to seek a cure for. Either way, with their nudity and other-such antics, as well as some damn fine tunes, they're going to be one of the most talked about bands of the weekend.

Mangling The Cure's brooding, menacing, shadowland rock with brash punk-rock may seem like a recipe for Interpolian goth-rock, but Leeds' Eagulls have made the sound their own. You could say that the silhouettes of Bauhaus and The Badseeds can be seen looming over them, but this band's debut album has taken them into the big leagues of modern indie, with their juddering wall of squall and their singer in his sunglasses spotted on all the big TV shows, both sides of the Atlantic, the chances are you're already hip to what they do. America has really taken the band to its anglophilic bosom (see the below their session at LA's Guitar Center) and come year-end, this band are going to be at the top-end of every album list worth reading.

With about a third of last year's crowd wearing one of their t-shirts and with chart-topping singles a-go-go it does seem a little bit strange that they're playing second fiddle to a band who haven't hadn't all that many hits, can't sell out two nights at The O2 and who haven't released a truly great album in over a decade (revisit that last QotSA album from last year and have a proper listen to those lyrics...). It's a bit baffling that they're not headlining (again! Last time around the went on before The Cure, which seemed fair enough), but that doesn't mean they're not going to play like it isn't the biggest gig of the year as the sun goes down. Hit after hit will turn this patch of hallowed turf into one of the greatest sing-a-longs of the summer. Expect heartfelt emoting, humungous hooks and Jeremy's back flips!

Related: Paramore spoke to DiS about their self-titled 4th album

An idyllic weekend: DiS does Wilderne...