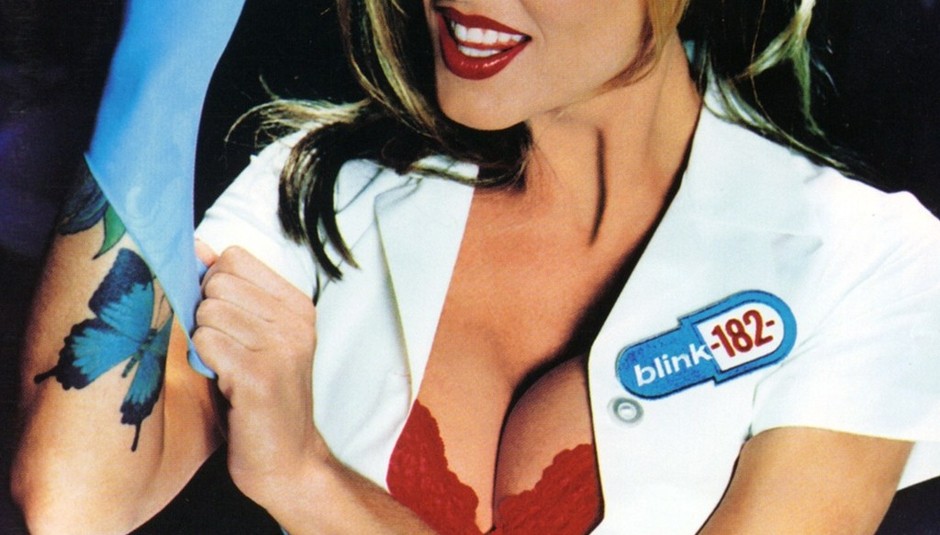 Does my enjoyment of Blink-182 make me a bad feminist?

Does my enjoyment of Blink-182 make me a bad feminist?

“Well, I guess this is growing up” laughs Tom Delonge as the backdrop of a huge, flaming FUCK sign brings Blink 182’s first Brixton Academy date to a close. With their own kids lined up by the side of the stage, these almost 40-somethings are still getting away with fart jokes over 20 years after their debut album came out. “We started writing about poo-poo and pee-pee two decades ago. We’re Blink 182!” he screams.

Sweat drenched, with aching feet and the sorest of throats, the show itself was an absolute triumph, but my mind is wandering...

Opening with ‘Feeling This,’ then ‘What’s My Age Again?’ and finally finishing the opener with ‘Rock Show’, it’s a greatest hits smack-in-the-face for this crowd full of twenty-somethings who are shout-singing every syllable whilst desperately swigging their beers. The band is unfathomably tight; thwacking their instruments with a feverish intensity, that allows their youthful energy to sustain itself throughout.

Strangers sing in each other’s faces; ear-splitting cheers fill the room as each riff begins and every middle finger Delonge puts up, another couple o’ hundred are lovingly thrown straight back at him. It’s easy to see why Blink 182 are still around. The set list is impeccably put together, as they dive into classics such as ‘Dumpweed,’ ‘Man Overboard’ and ‘Happy Holidays You Bastard’ before showcasing a few recent offerings including ‘After Midnight’ and ‘Natives’ that stand so well against the older stuff. That blend of frantic (and wholly, wholly impressive – how do Barker’s arms stay attached?) drums, sing-a-long bridges and perfected chord structures are still rife in this band’s song-writing, proving Blink 182’s iconic pop-punk golden era is far from over.

Constantly spouting comments like ‘are you enjoying the art show?’ and ‘I’m the best guitarist out there, I can play Sweet Child of Mine’ are perfect examples of what makes Blink 182 so appealing; these rockstar satirising interactions turn the show into something all-the-more human. With ‘Crappy Punk Rock’ placed across mounds of merchandise, the notion that Mark, Tom and Travis are still just a bunch of kids who love to play pop punk rings true.

I first saw the band on November 30th 2004 during their self-titled tour. I was barely 16 and as I sobbed during their rendition of ‘Stay Together for the Kids,’ I knew that the three piece had had a profound effect on my pre-teen years. Like everyone else, I’ve changed a lot in those 10 years; I’ve attended university, I’ve had my heart broken, I’ve moved house 9 times, I’ve been made redundant and I’ve started a feminist group. Whilst my love for the band has only flourished in the 10 years that have passed, the feminist articles I have read and the discussions I have taken part in have made me go back and question a few things... How can I be a feminist and still support a band that sings songs about needing a girl they can train?

I’ll be honest with you – delving into this kind of territory is totally new and terrifying to me. Many will exclaim that putting a feminist microscope on Blink 182 is merely creating an argument that isn’t there; that they’re throw-away fun that needn’t be analysed. But as a feminist, was it okay to be singing along to ‘It’d be nice to have a blow-job from your mom’? Or, was there any way I could stand up for this slut-shaming incident back in 1997?. The argument of being a ‘good’ feminist or a ‘bad’ feminist is rife at the moment, with recent exclamations from Roxane Gay that have had me questioning the infinite realms of the feminist movement. For me, being a feminist is being aware of the problematic aspects of our society and our culture; to strive for equality and to help abolish the idiotic gender stereotypes that are so strongly thrust upon us all from such a young age. Everyone has their own way of being part of this movement, and like many others, I have no idea if I’m doing it right.

Born in 1988, I’m part of the American Pie generation. The band appeared on the soundtracks for Can’t Hardly Wait (‘Dammit’) in 1998, Loser (‘What’s My Age Again?’) in 2000, Daria (‘Adam’s Song’ and ‘What’s My Age Again?’) in ‘99 and 2000, and Buffy (‘All the Small Things’) in 1999. They simply are the American Pie generation. Hell, they were even IN American Pie. They were everywhere. But the late 90s and early 00s was also a time of popularised objectification, with films and music endlessly showcasing women as sexualised play-things. From the entire film plot based around a man-child discovering his sexuality in an apple pie to the endless, sexist tirade of Stifler, it set the stage for years and years of boy-only banter.

But it was also a time of rebelling – of how it was okay to be the dorky kid with the dorky friends. Much like today, culture was telling 14-year-old you that you needed to be pretty and cute and sexy and get boys to like you otherwise LIFE WOULDN’T BE WORTH LIVING. Teenage boys were told to bulk-up and be the jock – basically, be a prick and girls will flock to you. Blink 182 were a band that perfectly captured this; by turning the mirror back on this particular culture, they rejected the idea of the ‘macho man’ and told us it was cool to be uncool. Just look at the video for ‘All the Small Things.’ Making fun of the decade’s pop culture was telling us that that stuff was stupid. It was telling us that we didn’t need the abs of Britney or the perfectly quaffed curls of Justin to be accepted.

They regularly displayed the notion that women will only be interested in a man if he is physically strong, displays alpha male dominance and acts like a total prick, but they did so with a satirical stance that allowed us to laugh at that world with them. Stating that all women are only interested in one type of man marginalises both sexes and objectifies women as a prize to be won. Blink 182 were showcasing how damaging these gender stereotypes are; they are highlighting the absurdity of inequality with both men and women by making a massive, massive joke out of it.

You see, Blink 182 has never put themselves above any group. They’ve never been the Robin Thicke in a slick suit, with beautiful, naked women hanging off their every limb whilst flirting between consent and rape. They’re the guys that never get the girl but when they do, they’ll awkwardly ask to dance or make a stupid fart joke because they’re just so damn insecure. Take ‘Josie’ for example - Mark’s vision of ‘the perfect girlfriend’. Josie likes the same bands; Josie laughs at fart jokes; Josie is ‘so smart and independent’; Josie is you. At no point does the song reference what she looks like (okay, she has ‘a pretty face’ but that could mean absolutely anything), she’s just a laid back, independent, smart person. “I don't think she needs me / Quite half as much as I know I need her / I wonder why there's not another guy that she'd prefer,” Mark sings. It’s about young, awkward love. It’s about being 16 and finding that great person you like to hang out with all the time. It’s about being insecure and being vulnerable.

They talk about farts and poop and pee-pee and they love getting naked. This isn’t the band throwing their dick in your face – this is band that is telling you that growing up is not something you have to do. "I think PC is awful," said a 27-year-old Mark Hoppus, in an interview with The Inquirer. "But we don't disrespect women more than men. We make fun of everybody. We're not racist, we're not sexist, and we’re not homophobic. We yell out, 'Show us your tits, but we also asks guys to drop their pants. I think 95 percent of the kids get the joke."

The tits-out culture of such rock shows has caused backlash from some that claim it encourages rape culture and harassment. "The rapes at Woodstock? I think that's disgusting," he continued. "I would never do anything to encourage anything like that… I get upset when I see girls crowd-surfing and guys run up and grab their breasts. We stop the show and throw those guys out… I go in with the assumption that people understand that it's evil and wrong and horrific to treat women in that kind of way."

So, whose responsibility is it to understand that it’s a joke? Is it on the artist – in a position of power and of influence – or is it of the listener, the viewer and the consumer to depict the media as they interpret it? The way I see it, is that if you put a certain microscope to anything, you’re going to find what you’re looking for. That microscope will highlight the flaws, the issues and the examples that almost any media will contain; it’s up to you how you digest such issues. If we are aware of such issues, then that in itself is a feat for feminism; if we are discussing these issues, then that is a feat for feminism; if we are constantly questioning our beliefs on gender, culture, stereotypes, then that is a feat for feminism.

Are Blink 182 a bunch of misogynists? Maybe. Are they the heroes of banishing cultural stereotypes that feminism strives to abolish too? Maybe. There will always be arguments for both sides but it’s in the creation of such discussions that feminism has flourished. The fact that we’re even talking about stuff like this – in culture, in media and in our everyday lives – is massive. Liking ‘problematic’ media doesn’t stop me from being any less of a feminist. I shave my legs and I like to wear make-up; my boyfriend sometimes pays for dinner; I SOMETIMES WATCH REAL HOUSEWIVES but none of that makes me any less of a feminist.

I think we all have to accept that nothing we consume is ever going to be crystal clear perfect in terms of our beliefs. Sometimes, a perfect riff teamed with super, super addictive lyrics are going to overpower your body and before you know it, you’ll be shout-singing every single syllable into the face of a stranger you had merely rubbed shoulders with just minutes before. I will forever be the loser kid and Blink 182 gave me that sense of belonging I so craved. Tonight’s show felt like a reunion of all the loser kids, being losers together in a big, fun, loserly way. Does my enjoyment make me a bad feminist? Who knows. What I do know is that listening to Enema of the State for the 600th time isn’t by any means going to diminish my feminist beliefs. It isn’t going to stop me asking for pay rise and it isn’t going to stop me calling out street harassment; it’s just going to make me dance around my room in my pants like it’s 1999.

An idyllic weekend: DiS does Wilderne...