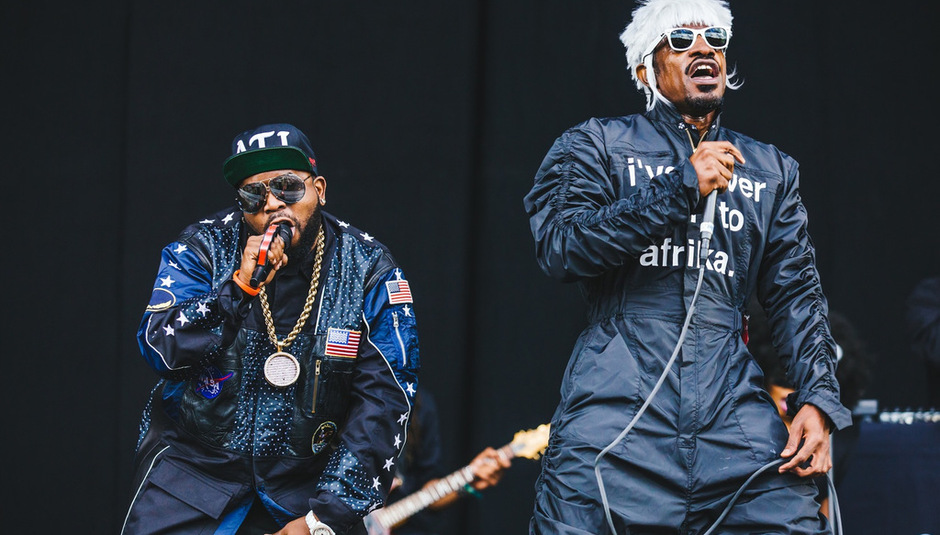 For years Wireless seemed to be suffering from an identity crisis. It had the least promising of beginnings, burdened by O2 with a name that could only have been thought up in a boardroom, only to be followed by a succession of corporate sponsors from Barclaycard to Yahoo! The festival changed locations even more frequently: moving from London’s Hyde Park and Harewood House in Leeds, to a car park outside the Olympic Park in Stratford, before settling, for now at least, in Finsbury Park in north London and Perry Park in Birmingham. It was only recently that organisers Live Nation finally gave the festival some stability by fixing on a musical identity.

Hip hop found its way into the lineup in 2008, perhaps as an attempt to repeat the success of Jay Z at Glastonbury, but it set a precedent for what followed, with Kanye West headlining the next year and, somewhat unimaginatively, Jay Z returning once again in 2010. Gradually, hip hop and R&B acts transformed what had been a fairly average pop festival, culminating with the surprise booking of A Tribe Called Quest, Nas and 2 Chainz in 2013. Now in 2014, Wireless has - in the space of three years - accidentally become the UK’s foremost hip hop music festival. A decision, one gets the sense, guided more by market share metrics and profit margins rather than any particular affection for the genre. But enough about the festival itself - we are here after all for the second coming of Yeezus.

First though, there is Angel Haze who, in one of mainstream hip hop’s many cruel twists of fate, is playing the same time as Iggy Azeala on the smaller second stage. Even if Haze’s debut proved to be a minor disappointment, the album’s lacklustre production is made up for here by the ferocity of her delivery. Despite running into the crowd as far as her mic lead will allow her she remains completely unfazed, not stopping to catch a breath before launching into ‘New York’ - perhaps still the best showcase of her abilities. By another inexplicable scheduling choice, following Haze is none other than godfather of disco Giorgio Moroder. As if to make his appearance all the more surreal, Moroder is introduced by host Tim Westwood, who keeps the stage filled between performances all weekend with quickfire sets of hip hop party anthems. Moroder made his surprise DJing debut only last year after the release of his contribution to Daft Punk’s Random Access Memories, ‘Giorgio By Moroder’. Much like the aforementioned track - a sort of autobiography in audio form - his set is a well-deserved victory lap of his production discography, offering him a huge number of hits to choose from. Much of the set is devoted to his collaborations with Donna Summer, although the unexpected inclusion of ‘Chase’ and ‘Tony’s Theme’ also serve as a reminder of Moroder’s talent for scoring film soundtracks - a medium one hopes he might yet revisit.

Warming up for Kanye on the main stage is another man with a sizeable list of production credits to his name. Much like Moroder, Pharrell Williams' appearance on Daft Punk’s fourth studio album felt like a statement of sorts, marking his return as a solo artist. Unfortunately, G I R L, the album which followed, was much closer to the formula set out by ‘Get Lucky’ than William’s past decade of groundbreaking productions. Here the effect is only exaggerated when his new material is juxtaposed with a medley of his hits as The Neptunes (together with Chad Hugo) and N.E.R.D (together with Hugo and Shay Hayley). ‘Happy’ seems a world away from the latter’s strip club anthem 'Lapdance' or the ingenious minimalism of Snoop Dogg’s ‘Drop It Like It’s Hot’, both of which are briefly teased before moving swiftly on to ‘Blurred Lines’.

Watching Kanye West on two consecutive nights feels like being caught in a Groundhog Day of Kanye’s own creation, forced to relive an endlessly repeating 24 hour news cycle. After about 15 minutes or so of Kanye talking and ad-lib singing midway through his set, the crowd reaction seems polarised: some boo and yell, some continue to cheer, others take to their phones to live tweet it all. The following morning is almost exactly as Yeezus preached: the headlines invariably describe the performance as a 'rant', 'tirade' or 'outburst', pathologising what had previously been a part of Kanye’s act throughout his tour. Most accounts neglect to mention that the cue for Kanye’s speech is a line in ‘Runaway’: “Let’s have a toast to the douche bags”: each night Kanye improvises on that theme and Wireless is no different. None considered Kanye’s speaking in the context of hip hop itself even though hip hop is at its most fundamental speech as performance.

In what is a stadium-sized world tour, the spoken word also gives some much needed unpredictability to what is otherwise a carefully stage-managed production. It provides some contrast to the rest of the performance in which Kanye asserts complete artistic control where ever possible. Everyone remains at the mercy of Yeezus, even the cameramen are given live directions from the man himself. Only in the spoken word interlude does the diamond Yeezus mask slip and we get to catch a glimpse of Kanye West. It's that moment which breaks up the monotony of watching the exact same set each night. At one point, Kanye abruptly orders his live band to rewind ‘Blood On the Leaves’ - its thunderous brass sample produced by Hudson Mohawke and Lunice; the Nina Simone sample, Kanye’s own addition. “We didn’t cause an earthquake”, he explains, and you fully expect that he might keep rewinding until nature obliges him. In typical Kanye fashion, that's the closest we get to an encore, the giant LED obelisk gradually fading down from red into black and he’s gone, leaving us to wonder whether we might wake up tomorrow and find ourselves reliving the spectacle one more time (Kanye standing in as headliner in lieu of an ailing Drake).

The second day of Wireless is given over to number of hip hop prodigies, the first of which is Odd Future member, Earl Sweatshirt, who released his debut, Doris, last year. It’s only after a good ten minutes of his DJ performing warmup duties that Earl appears on the stage, by which point the crowd are already losing their shit to JME and Skepta’s ‘That’s Not Me’. With the tempo set so high and so many OF fans packed into a small tent it’s inevitable that the weekend’s first moshpit breaks out. At one point Earl addresses the crowd like a disappointed parent: “I don’t want your effort, I want you to give me your all”. But Doris, much of which he performs here, is not an album that lends itself to such a setting: it’s a introspective, lyrically dextrous and relatively measured album that all to often sounds at odds with Earl’s performance here.

Chance the Rapper, who’s on straight after Earl, couldn’t offer more of a contrast: performing with a full band including two trumpet players and live drummers. It’s not a setup that does Chance much justice - overemphasising the soul and jazz influences on Acid Rap at the expense of muffling his own vocals. Any any rate, its impossible to hear anything over the crowd, who by now have had time memorise last year’s mixtape in its entirety. Less forgivable than the live band is the extended cover of the theme of Arthur, an animated children’s television show - a painfully saccharine song at the best of times and yet more evidence that Nineties nostalgia is best left as fodder for Buzzfeed quizzes.

That said, not everything from the Nineties deserves being archived to list form: crowning a lacklustre Sunday lineup are Big Boi and Andre 3000, back together for a tour to celebrate two decades of their incredible partnership as OutKast. Thankfully time hasn’t diminished the latter’s eccentric wardrobe taste: Andre appears on stage wearing a white wig and black boiler suit emblazoned with the words 'I’ve Never Been to Africa' and an oversized price tag labelled 'sold' attached to it. Big Boi plays the role of the straight man, leaving the antics and costume to the restless Andre. When he’s not running from side to side of the stage, he’s doing pushups while his partner rests a foot on his back, or stealing a trumpet from his band and marching around with it while holding it at crotch level. So often on reunion tours the chemistry between performers is long gone but here the two seem to be enjoying each other’s company.

After exchanging some gibberish impersonations, Andre jokes “We’ve got our language”: it might be an throwaway remark but in a sense it's true, for four studio albums their shared artistic vision was so complete it was like they’d constructed a language of their very own. The pair only begun to drift part creatively on 2003’s double Speakerboxx/The Love Below, still a collaboration but one with space for each to explore their diverging identities. Here they take turns to play short solo sets: with Big Boi joined by an exquisitely tailored Sleepy Brown for ‘The Way You Move’; Andre, meanwhile, performs ‘Prototype’ and, of course, ‘Hey Ya!’ together with a number of female backing dancers. The former gives Andre the chance to drop a humble brag: “I use to be scared to sing on stage but now every rapper sing - funny that”, he tell the crowd. This weekend’s acts alone provide as good evidence as any of the pair’s continued influence: the giant screens on either side of the main stage cutting to a well-timed camera shot of Chance the Rapper, who watches on from the VIP area. It’s a set that also confirms the divided appeal of OutKast: the crowd seems dazed by the double blow opening of ‘B.O.B.’ and ‘Gasoline Dreams’, only energised by ‘Mrs Jackson’ some tracks later.

There are a few unexpected deeper cuts, such as Aquemini’s ‘Da Art of Story Tellin’ (Pt. 1)’, Andre’s tale of Sasha Thumper having lost none of its emotional impact, and the surprise final track choice of ‘The Whole World’ - which appears only on OutKast’s greatest hits album. Before they leave the stage, the Andre address the audience one last time: “We don’t do this stuff for the black people, we don’t do it for the white people, We don’t do it for the gay people, the straight people…”, pausing to let Big Boi finish, “…the purple people or the flippy floppy people - we do this for the whole world.” The question is how long will they keep doing it for? Will they still be touring with each other come the next 20 year anniversary? One can only hope that it might be forever ever.