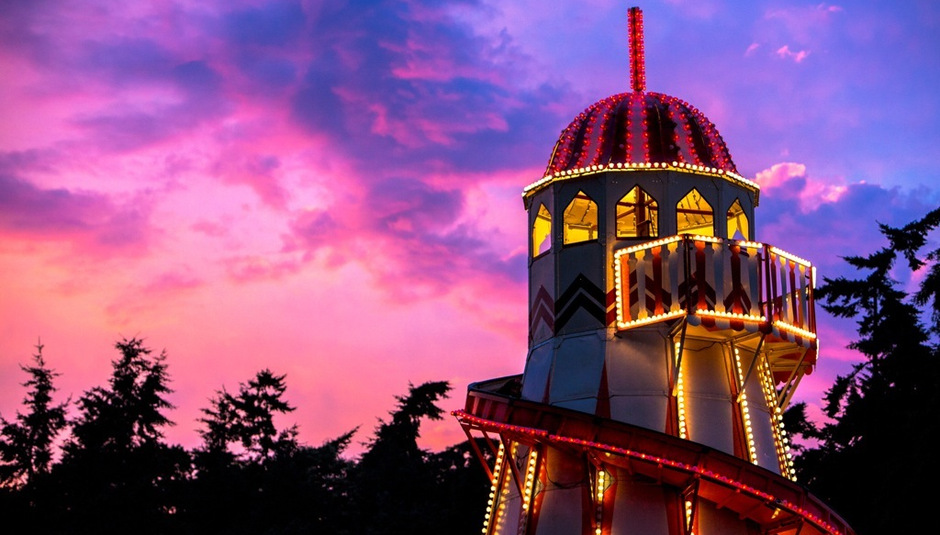 Seven years on, and be-facepainted teenagers are everywhere, there are multiple stages and bars open until 3am (on which electronic dance acts play their repetitive-beated troth), and not one but two young men tried to sell us drugs in the iArena on Saturday night.

And yet… it’s the same old Latitude if you want it, there’s just more bits - Pappy’s are still getting drunk on Friday night in the Literary arena; Josie Long is still leading wholesome calls to arms on the Comedy stage; there's ballet on the Waterfront; whimsical live art curators Forest Fringe continue to do their whimsical thing in the Faraway Forest; the sheep are still dyed exiting pastel shades… heck, Mogwai are still headlining (admittedly, only on the second stage this time, but I wouldn’t be surprised if they drew a physically larger crowd than their 2006 Sunday headline slot - fyi they are ace, though my state of mind at the time probably precludes deeper analysis).

What this all does mean, gentle Drowned in Sound reader, is that I didn’t really see all thaaaaat many bands, but you know, rather than blather on about theatre on a music website, let’s just talk about the music.

Let’s talk about Daryl Hall & John Oates. Did they change their name from Hall & Oates? Or have we been calling them the wrong thing all along? Probably that’s not relevant. What is relevant, perhaps, is that they’re the one band I see all weekend who manage to unite the tribes of Latitude - there are older people watching them earnestly, people my age watching them with a certain level of enthused irony, and the youth of today enjoying them with a sort of post-ironic omnivorousness - I doubt it would even occur to the little blighters that this pathologically cornball pair of sixtysomethings are any more or less cool than, I dunno, Julia Holter. Anyway, they plough into Latitude as if it was Wembley Stadium - I sincerely doubt they have the first clue where they are, but it’s still fucking glorious: obviously it would be horrendous if all music was like this, but when they give over what feels like 20 minutes of their set to an exquisitely wrought ‘I Can’t Go For That (No Can Do)’ - at least half of which seems to be a sax solo - I must confess to feeling rather like Patrick Bateman having one of his AOR raptures.

What else, what else… ah, the sky! The sky at Latitude was amazing. During Kelis’s rapturously received, perfectly pitched set of souled-up reworkings of her greatest hits, the sky is the sort of deep azure you feel you could somehow drown in - somebody in the crowd somewhere has what I can only assume to be an actual bubble cannon, and when the air overhead fills with shining flocks of bubbles just as she sings “just like the sky, like the 4th of July” it is pretty amazing.

Skip forward a day-and-a-bit and Damon Albarn is receiving the sort of brain-frying elemental accompaniment that the evilest of metal bands only fantasise about. The black sky is wreathed with lightning - eerily unaccompanied by rain for the first hour - which elicits cheers in and of itself. It makes a dramatic intervention in the encore, when a searing chain of electrical light distracting Albarn so much that he breaks off from introducing his first special guest - one G Coxon. There’s a slightly lopsided quality to the set - after an incandescent one-two of the Graham-augmented ‘Tender’ and a positively volcanic freestyle from Kano on ‘Clint Eastwood’, the encore finishes with newies ‘Mister Tembo’ and ‘Heavy Seas of Love’, which is fine, but possibly not quite what we were expecting it to build towards (I assume it’s all a logistical decision based on final guests The Leytonstone City Mission Choir, who sing on both). And closing the main set with obscure Blur song ‘All Your Life’ seems to slight flummox a crowd that appears to know more or less every word to every song on Everyday Robots. But by-and-large it’s a triumph, a perfect synthesis of Albarn, Gorillaz, Blur and The Good, the Bad & the Queen that quite understatedly reminds us that yes, he is actually a genius. And he really works for it - it goes without saying that he’s a consummate showman, but by the end there are seriously something like 40 people on stage (I’d call them ‘musicians’ but one of them is a man dressed as a clown whose role I don’t exactly understand); I get the impression cracking his maiden UK festival headline set really meant something to him.

There was a general assumption he’d reprise his role as keyboardist in Afrofunk supergroup the William Onyeabor Project the next day, but ’tis not to be; nor, sadly, does the group’s mastermind David Byrne turn up, despite a slightly confusing series of press releases from the festival’s PR suggesting this may have been due to appear at one time. It really doesn’t matter though - a band including Alexis from Hot Chip, Ninja Tune’s Young Fathers and about a gazillion other folk blitz through a series of covers of songs by the ebullient Nigerian musician, ‘discovered’ by Byrne decades after he’d denounced his own music as un-Christian.

And that’s kind of it. There were other bands - heck, I saw Teeth of the Sea twice - but let’s not turn this review into an autistic trudge. Latitude continues to grow up, but it is what it always was - a jolly good time.