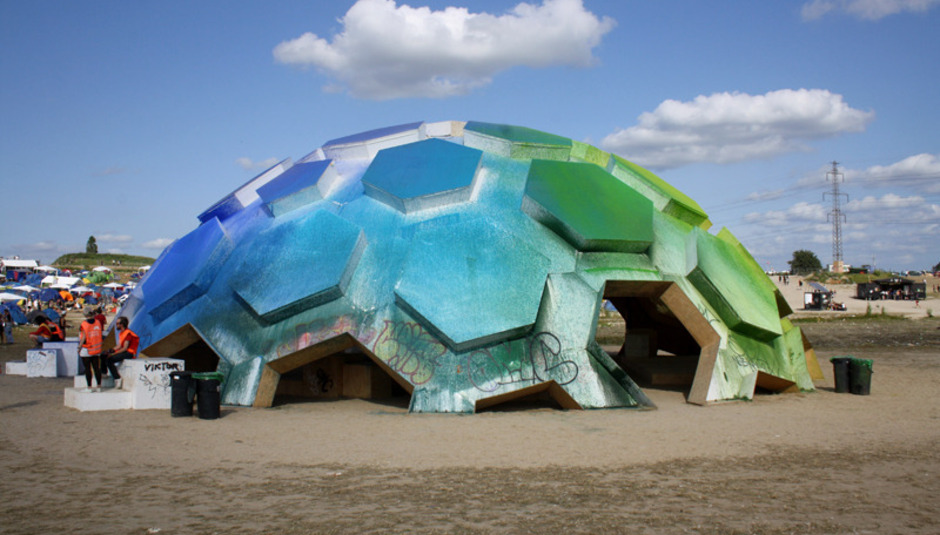 The sight of over 30,000 unpaid workers toiling tirelessly towards a mutual objective is reminiscent of the projects that brought the pyramids to Giza; that built Petra, the ancient city carved into stone; or in contemporary terms, that make up a fraction of London’s interns. Yet these particular workers - who on average have helped out for six years each - actually form a motley cohort of willing and enthusiastic volunteers that are a vital organ in the anatomy of Denmark’s Roskilde festival.

Only a stone’s throw away from Copenhagen, forming a self-sufficient state for a week, Roskilde becomes the fourth largest city in Denmark when in progress. At 130,000 strong, it easily dwarfs the nearby cathedral-peaked town of the same name. Though perhaps a rock is the more apt object to fling, since that’s the genre that underpinned the festival when it was set up by two students - self-described 'half-naked hippies' - back in 1971. It emerged from the slipstream of Glastonbury, which began a year before, and although Roskilde has a unique vibe, descriptions of it as the iconic British festival’s continental counterpart are not far off the mark.

In its 44th year, Roskilde is the third biggest festival in Europe, and one of the most prestigious too. Its decorated history is woven like a fine tapestry: Bob Marley played in 1978, Talking Heads in 1979, U2 in 1982, Metallica in 1986 and Radiohead in 1997. But at the same time, Roskilde remains a distinctly Nordic phenomenon. Aside from the ubiquity of blonde locks, resembling fields of sun-dried hay, the festival has had trouble drawing an international crowd in recent years - partly due to the Danish krone’s strength during the economic downturn. A consequence is the replacement of two previous band tents by the Avalon this year, meaning schedules were occasionally a little thin.

The fact that Andre 3000, clad in a platinum wig and ivory sunglasses, proclaimed 'Hello Copenhagen!' (a different city) several times during his set for Outkast, shows how Roskilde’s international visibility is limited. Yet, there’s no reason for that. The festival has so much going for it: a world-leading smorgasbord of mouthwatering food, a blend of global big-hitters and Danish virtuosos, Relax City (which offers yoga and lake-swimming), cash payment not tokens, a traffic-light system that prevents overcrowding, and simply the wildest campsite parties ever seen.

Earl Sweatshirt was given the honour of beginning proceedings, but in typical fashion, actually turned up late. It wasn’t the most memorable of performances from the OFWGKTA rapper (whose troupe were banned from the festival in 2011 for stage-diving), with opener ‘Kill’ performed rather sluggishly. But things improved for the largely teenage crowd with ‘Molasses’ providing an excuse to get active. "Rub dem freckles of your face, bitch!", he crooned.

If it weren’t for his tardiness, the end of his set would have pleasingly segued into the beginning of Outkast’s - Roskilde’s schedule is spaciously-curated, and bands play a minimum of one hour, meaning you can always see a bit of everyone’s performance. Nonetheless, we made the executive decision to not risk missing the joy of ‘So Fresh, So Clean’, ‘Hey Ya’, ‘Miss Jackson’, or ‘Roses’. The decision was vindicated as the eccentric hip-hop innovators were in fine form, with Andre 3000 sensing the feel-good summer vibes: “If you fellas don’t get laid tonight, I can’t help ya.”

Lykke Li was disappointing, with an ageing set that is no longer as potent as it was a few years ago. As a championed figure of the Scandinavian scene, the crowd did still lap it up, but there was a considerable, weighty shadow cast over her: The Rolling Stones, who were to perform soon after. Many years ago one of the band’s first touring stages was sold to a Danish music festival, and they returned to it as Roskilde’s iconic Orange Stage. The festival were criticised for spending a large portion of the budget to get them, though the palpable exhilaration made clear that the Stones were the reason many came. The band played a 19 track setlist of hits, starting with 'Jumpin' Jack Flash', and ending with 'Brown Sugar'. They then re-appeared for an encore of 'You Can't Always Get What You Want', joined by the Vocal Linene Choir, and '(I Can't Get No) Satisfaction'. Gaunt and ageing he may be, but Jagger still knows how to control a huge audience - all six generations of them, even speaking in perfect Danish to the crowd at times. The band clearly still enjoy performing too, as a beaming Keith Richards told the crowd: "It's good to be here. Well, it's good to be anywhere really."

Connan Mockasin provided the perfect antidote to a mind-swilling with alcohol the following day, with an incredibly tight yet effervescent set. His swirling psychedelia and curvaceous grooves were soaked up the crowd, and Mockasin then somehow convinced a large part of the audience to take their clothes off. The same happened later at Major Lazer’s barnstorming appearance on the main stage. This sort of thing certainly wouldn’t happen in England, but then again, nudity is a common theme at Roskilde, with their annual naked run just one of many - sometimes unsolicited - examples.

Another artist laid bare was Damon Albarn, who at first appeared to be somewhat inebriated: his piano-playing was a bit haphazard, and he couldn’t quite reach all the notes. Though as the set progressed, Albarn seemed to sweat it all out, and the show jumped up a few gears, touring through his fertile back catalogue and with De La Soul and Kano making cameos. Unfortunately, the Danish electronic flagbearer Trentemøller himself was quite sobering in a midnight slot that was supposed to energise for the Friday night ahead, rather than exacerbate the heavy feeling in your legs.

The next day was a cluster of world music: Omar Souleyman, Les Ambassadeurs (ft. Salif Keita) and Manu Chao who had the Nordic audiences dancing exoticly, while the latter turned in a performance more a la Dropkick Murphys than the becalmed troubadour than he sometimes appears. Interpol shone brightly with a setlist of hits, though the liberal pockets of space were visible - while the New York may have easily crossed the Atlantic, the North Sea was apparently more difficult to traverse. It was astoundingly different MØ when played in the same tent, Arena, later on, where the crowd could have filled the space twice over. Yet, her soulful electronica jarred in such tight conditions.

Sunday was one of the days hit by a number of cancellations to this year’s festival. Chance the Rapper cancelled five minutes before due to perform, Chromeo cancelled the week before, and Drake was replaced by Jack White after the festival was in progress. The last of these changes was certainly not be lamented as White was in imperious mood, blasting out his bluesy garage, and causing the 60,000-strong to implode with a rip roaring encore of ‘Seven Nation Army’. He was not the only one in rude health, with Stevie Wonder orchestrating an audience that knew every word, before declaring that racists “should have their eyes cut out”.

By the end, festivalgoers had been offered a total of 166 concerts by artists from 30 countries, not to mention a surprise speech from Pussy Riot, in which they urged musicians to tackle injustice. It is a festival that is unmistakably Danish, no better exemplified than their word “hygge”, meaning coziness or a warm atmosphere. There are ergonomic urinals attached to random trees, polite middle-aged men used to hype crowds, prevalent earplugs, and it would seem, no drugs. Roskilde is a non-profit festival that has raised almost DKK 200 million (around £20 million) in its time. It is an institution, and despite its recent difficulties, will surely be around for a long time to come.