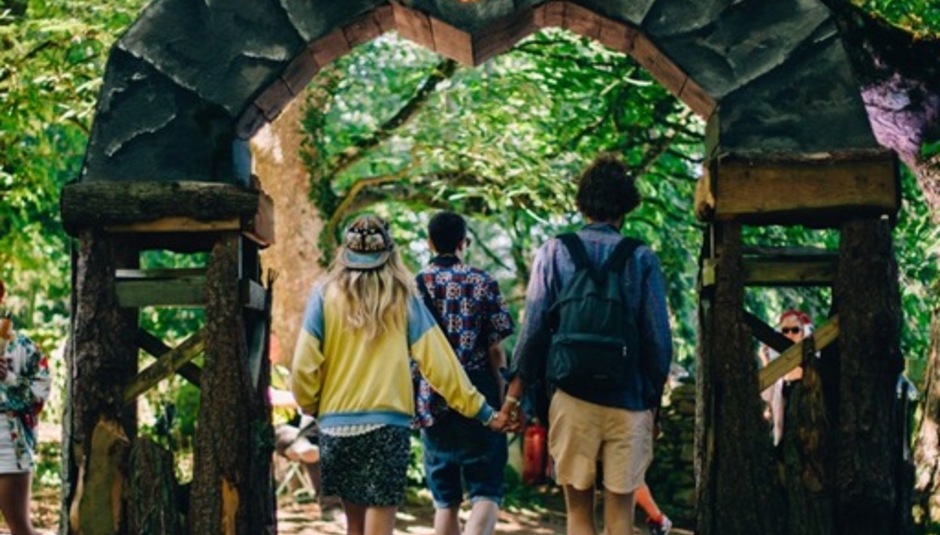 Cut into a small wood at the very tip of Anglesey, the central path of Gottwood Festival’s main arena meanders through trees and clearings, the adjacent series of stalls, surreal art installations, screens and stages vying for your attention. On the right, cars decorated with intricate monochrome patterns are left abandoned alongside ping pong tables. A myriad of strange lighting and colourful decorations hang above your head. One stage even has cut-outs of the characters from The Jungle Book poised above it, Shere Khan leaping out from behind a tree.

This sort of attention to detail has long been the remit of Gottwood – a celebration of dance music (and its eclectic offshoots) that’s made a name for itself purely by being so lovingly put together. Walking through the packed site on the first full evening of music, it's hard to concentrate on any one thing because, well, there’s so much to see. Thousands of people whoop and shout in opening-night elation as techno filters out into the forest around you. The trees are lit up in a slew of surreal colours.

Befitting the chaos, there doesn't appear to be any sort of 'main' stage. Rather, DJs are arranged by label, or placed by their suitability to each venue. This can mean lots of stage hopping. Friday night starts with Maribou State serving The Caravan with a soft, summery palette of dance tunes – including their own ‘Scarlett Groove’ and Caribou’s ‘Sun’. However the sound system doesn’t do their selections justice (the only time this happens all weekend). In The Woods Max Cooper has no such problems, and gauges his pumped-up crowd as you’d expect from a man with seven years' experience. He cuts between his older, club-orientated techno with skill, whilst sticking to the more upbeat tracks from his debut LP (‘Numb’, for example, sounds raw and exciting). Finally, we end at The Lake for Tale of Us, who produce a stellar set, mixing deep, murky sounds with crowd pleasers like Moderat’s 'Bad Kingdom'. The finale is their own techno anthem 'Another Earth', whose ending barrage of synth and low-end bite sends the crowd into overdrive (and probably ensures a decent night’s sleep for all).

Like most festivals, the days in Gottwood are far more sober and clear-minded than the nights. But under the hot sun on Saturday afternoon, Newcastle’s Souljam DJs play one of the most energetic and astute daytime sets. They move the entirety of the Mother Owl stage (even those delicate souls queueing for some restorative grub manage a light bop) with their mix of disco and funk, producing the most euphoric moment of the weekend with Dimitri in Paris’s remix of Prince’s ‘I Wanna Be Your Lover’. Later that night, things get even more heated with Dense & Pika. Live, they’re as visceral and infectious as you could hope for, their stunning remix of ‘Erotic Discourse’ and original ‘Colt’ sounding larger than ever, and satisfying the expectant crowd. Just prior, Hypercolour cofounder Alex Jones produced a short and sweet set, with Ten Walls' ‘Requiem’ at its core.

The next day we awake confused and tired, having reached the strange and often lacklustre portion of most festivals - Sunday. However, two brilliant performances make it quite possibly the best day of the weekend. Firstly, Sri Lankan Londoner My Panda Shall Fly rocks up to The Barn – essentially a small, overly hot room decked out in low-hanging rainbow lighting – with nothing but attack and more attack, splicing UK Garage from the likes of DJ Luck and MC Neat with choppy electronic sounds, and a dash of jazz.

But the real stroke of genius is to close Sunday night at the Walled Garden with SVS Records, a small Munich-based experimental techno label. They play some of the heaviest, murkiest, most minimal techno of the weekend. The pace is slow, and the music feels distant and anaesthetised at times, but the whole tent is in rapture as they drop tracks from seminal minimal label Raster Noton, and a bunch of their own releases (see Maxim Wolzyn’s new Intercity LP). Gottwood has long made these deviations from the beaten musical track something of a hallmark – and boundary pushing like this is what makes it an essential for anyone who truly loves dance music.

Rappers and Melody: An Analysis by Ch...