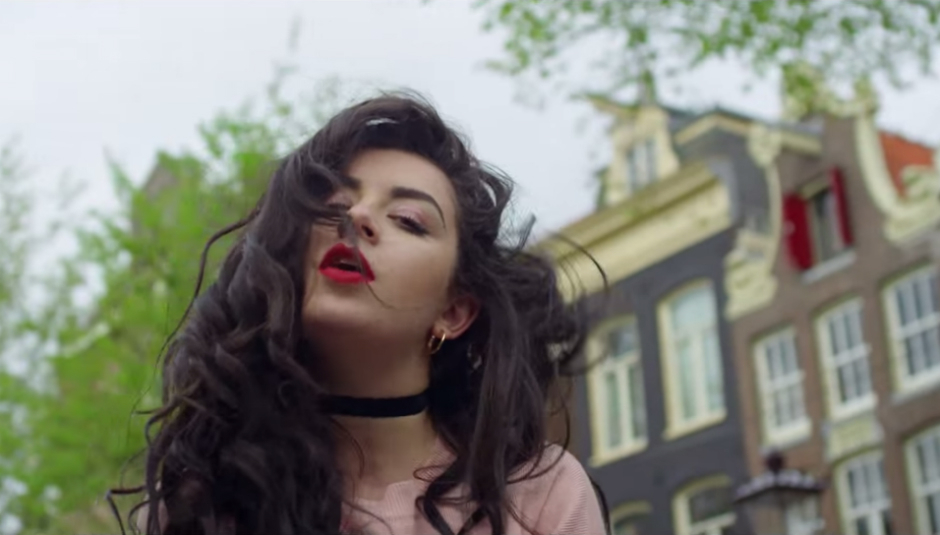 Hello. Thanks so much for tuning into a brand new edition of DiS Does Singles. As usual, we’ve rounded up the best new songs from the past seven days - all for your listening pleasure.

This week, Perfume Genius has got fighty for his new album, Alvvays have marked themselves out as lovers of the eternal kind and The New Pornographers are also sticking to the conflict theme with a string of military similes. Elsewhere, there’s ace stuff Conor Oberst and Honeyblood. Plus, a Jamie T that's not really worth the wait.

Most importantly, Charli XCX has done something great again and got herself Single of the Week.

Nothing about Charli XCX makes any sense.

So how the hell did Charli XCX attain her staggering level of success? Paris Hilton’s new single has a few answers…

Although any song off the new Robin Thicke album would also serve as an apt comparison, ‘Come Alive’ is much less excruciating. Mainly because its video features a real life unicorn, but also because it’s truly clueless about what a pop song should sound like.

Rather than attempt anything the slightest bit new, it riffs on every pop trend from recent memory. From a limp piano house hook to the cotton candy iconography of Katy Perry, no stone is left unturned in the song’s quest for virality. The end result is an offering that literally anyone could perform if they had 12.8 million Twitter followers and a major label record contract. It’s so populist as to be anonymous, the complete opposite of a Charli XCX track.

‘Boom Clap’ is Aitchison’s version of a ballad, just as ‘I Love It’ was a feelgood summer jam and ‘Fancy’ came lathered in Southern rap swagger. Its adolescent, chanting chorus doesn’t chime with this year’s chart trend, but it doesn’t need to. You know exactly who you’re listening to as soon as that intro rings in. “Boom! Boom! Boom! Clap!,” Charli hollers with utter sincerity, and if that sounds dumb you’ve understood the philosophy.

“I think all of the best pop songs are very simple,” Aitchison recently explained to Stereogum. The ‘Boom Clap’ message: it only takes some thunderous percussion and lilting synth to craft a massive pop banger.

Easy? We still have no idea how she did it.

“Sometimes I see faces of blank fear when I walk by … if these fucking people want to give me some power — if they see me as some sea witch with penis tentacles that are always prodding and poking and seeking to convert the muggles — well here she comes.”

Both an excellent treatise on society's approach to homosexuality and use of the word ‘muggles’, we’re sure you’ll agree. As for the song? That’s stonkingly good too.

As the laws of indie-pop state: lust is forever, love is not. To remind you of this immutable fact, Canadian troublemakers Alvvays have penned a tribute to getting hitched with a truly saddening aftertaste.

On face value, Molly Rankin couldn't be more committed to the idea of happily forever after. "Hey, hey. Marry me, Archie," she coos to her beloved, as though they're one step away from adopting a litter of kittens. Alas, he's not too keen on that idea, or putting a ring on it. Then comes a swell of Vaselines-indebted misery.

They may have been born 3,280 miles away from Glasgow, but these Toronto tykes have a world in common with all your favourite knitwear fans. We suppose you could blame it on the rain.

You Are Your Mother’s Child (Nonesuch Records)

If you lost track of Conor Oberst after Bright Eyes then now's a good time to come back to the scattish troubadour. After diving around with the Mystic Valley Band and Desaparecidos, he's returned to the sound you used to hear on Halifax adverts.

'You Are Your Mother's Child' is an acoustic ditty that flits its way around your heartstrings with aching dexterity. A stripped-back tale of homespun wonder, you'll be swooning along from the moment its chorus rings true. "Now that you're grown, may you never feel this alone," simpers Oberst with his trademark rustic twang.

At least that's what we think he said. We were busy blubbing our eyes at the time.

War On The East Coast (Matador)

Although The New Pornographers’ latest single isn’t technically an ode to 90s hip-hop feuds, its video does contain a hell of a lot of pyrotechnics. The one-take clip sees Dan Bejar and A.C. Newman saunter through a city full of deviants who’re hellbent on all sorts of stuff your mother wouldn’t approve of.

"Blondes, brunettes and fighter jets," spits Bejar, as though he's naming the key interests of a Zoo Magazine reader. Really, it's all a load of frivolous nonsense, but that is the best sort of baloney.

‘Super Rat’s video sees Honeyblood ply their scuzz-rock schtick in front of a flan. This isn’t an ordinary gelatin-based dessert though, it’s laced with pyrotechnics and... we’re pretty sure you see where this is going. If you’re super into the worst pudding of all-time, then stare away from your computer screen.

He's gone for five years and returns with a song that rhymes “find” with “mind”. A forgotten genius, for sure.