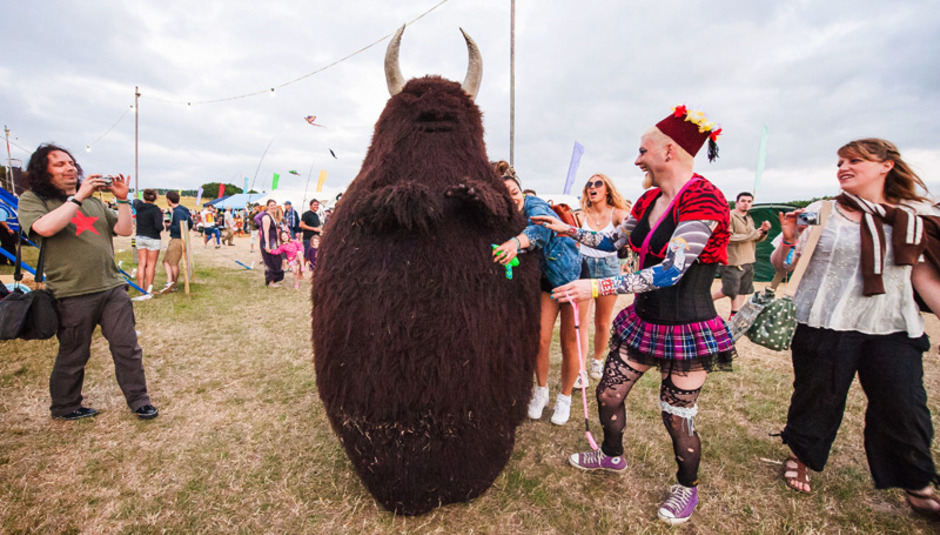 When Truck Festival launched in 1998 it confused me a lot, because about four years beforehand my Dad had taken me to ‘Truckfest’, Peterborough’s annual lorry-based gathering. There’d been a monster truck display, Quentin Wilson from Top Gear introduced events and Hunter and Jet from Gladiators were helicoptered in for a personal appearance, there was a record fair where I got a load of Nirvana live bootlegs, and loads of cool trucks. I had an ace time. This sudden shift to indie bands slightly threw me.

Of course it turned out to be an entirely different event (and Truckfest is still going strong by the way, this year there’s Slade and Queen tribute bands, as well as Joey Essex and 'Celebrity Truck Driver' Mark Dixon) and Truck, the music festival, has gone from strength to strength, becoming a perennial favourite on the mid-sized festival circuit, specialising in buzzsaw pop bands, proper indiepop and a usual smattering of Britpop faves.

The Cardiff-ish eight/seven/six-piece delivered one of our albums of last year in the form of No Blues - Gareth and company have matured from a delightfultweecore shambles to a lean, emotive indie machine. This year they’re closing the Market stage on the Friday, it’s where all the hip kids will be.

Another late bloomer, the Sheffield duo’s latest album, Complete Surrender sees them make the leap from dreamy-folk to beautifully wrung soul-pop that could comfortably have come out of Muscle Shoals in 1967. Worth seeing for Rebecca Taylor’s belting voice and brilliant jokes, often undercut by her fabulously dry counterpoint Charles Watson.

No-one ever remembers how completely brilliant Dodgy were, and indeed continue to be. Often dismissed as Britpop also-rans, it’s easy to forget they had a couple of wonderfully crafted albums in the Nineties, (1994’s Home Grown was hailed a masterpiece when it came out) and made one of the best reunion/comeback records of the last decade. What’s more every festival needs a couple of belted-out anthems, and you’ll be hard pushed to find better than ‘Good Enough’ and ‘Staying Out For The Summer’.

There’s been an intensely irritating tendency for Nineties indie-grunge revivalism just now (Peace’s shudderingly derivative debut is the main offender) and for those of us that, ahem, ‘lived through this’ the first time round it’s difficult to get excited about a new crop turning older tricks. Superfood, though, are the real deal. They’ve a commitment to fuzz pedals, big choruses, plaid shirts and girl bass players that would make Billy Corgan proud, and the songs to back it up. Could run away with the festival.

For those slightly non-plussed by Brody Dalle's more pop direction, Deap Vally will probably restore your faith in sneering, rock n’roll grrrrrls. The LA two piece hammer the shit out of their instruments while making sexy-as-fuck blues-rock. Un-dislikeable.

The unfaultably indie trio have become happily beloved of the sticky-floored XFM crowd for years now. They toss out bloodthirsty dancefloor anthems with a flick of a denim jacket, know how to make a racket and just when you thought they’d hit their peak, managed to get the guitarist from the Smiths to join them. J Marr has sadly parted ways with the boys, but that’s just left them sounding leaner, and as last years best-of collection proved, they’ve easily got the songs to close a festival.

Hands down the best new live band in Britain, Brawlers are making the kind of impact on the gig circuit Gallows had back in 2007- you come away from their shows elated and ready to punch someone in the face just to prove how alive you are. Fantastic pop tunes and a grimy punk edge that manages to avoid the irritating US-aping bollocks of the likes of You Me At Six. More fun than a puppy on a skateboard.