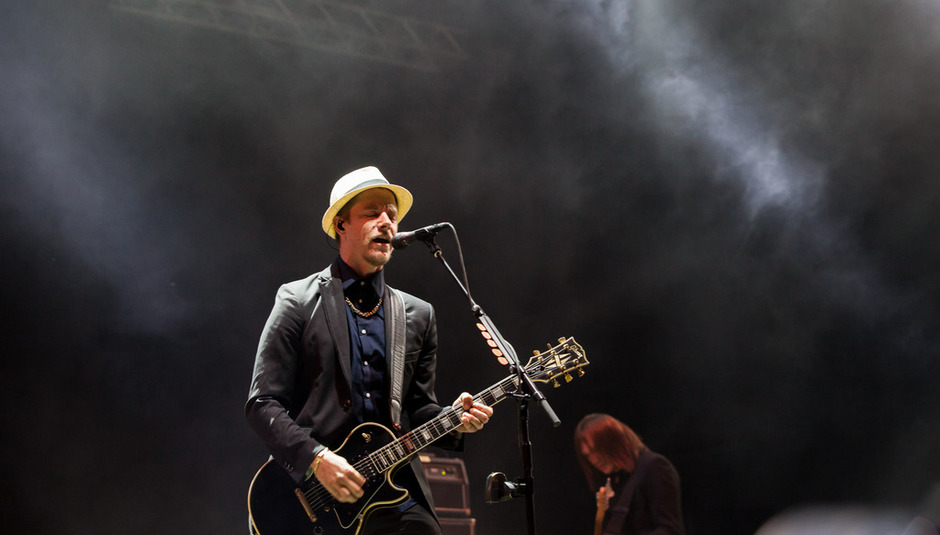 With the festival market having become so saturated, more and more punters are looking overseas for their annual summertime adventures. And understandably so if Optimus Alive is anything to go by. Situated in the picturesque Alges district of Lisbon on the side of the Tagus river, not only is blazing sunshine more or less guaranteed, it also represents excellent value for money too. With weekend tickets costing just €121 with camping or €105 without, not to mention ridiculously affordable food and drink prices (€3.50 for a pint of wine anyone?) it puts many of its rivals to shame.

And that's before we even mention the line-up, which boasts a plethora of big name artists from both sides of the Atlantic. Of course there's always a downside, the main one here coming courtesy of the inevitable corporate branding permeating through the festival's very core. This year saw the event renamed NOS Alive after the Portuguese media giants who've taken over as 2014's main sponsors, not that any of its 55,000 revellers could care an iota.

Unsurprisingly, there's a heavy Brit contingent to be found over the three days, no doubt lured by the Arctic Monkeys and Libertines headline slots which bookend the festival. There's also a healthy diversity among the bill with something for pretty much everyone except metalheads. But hey, what's new there? What this makes for is a collection of the good, the bad and the distinctly average but with the sun beating down intensely from start to finish what more could anyone ask for?

It's probably apt then that the first band DiS encounters are Temples. With a top ten album already under their sleeves, the Kettering four-piece exude a confidence and professionalism seemingly lacking among many of their peers and contemporaries. Penultimate number and former single 'Mesmerize' proves to be the highlight, extended to a seven-and-a-half minutes long jam here. With the glorious early evening sun in the background and a healthily enthusiastic crowd out front, they're a fitting introduction to the weekend's festivities.

We'd like to say the same about The Lumineers and Imagine Dragons too but if we did we'd only be lying. While the former serve up Mumford-lite fare that makes the public school folkers sound like Slayer, the latter play one of the most inept cover versions these ears have ever been subjected to, butchering Blur's 'Song 2' in a most bloated, histrionic fashion. Thankfully, Interpol arrive just in time to save the day. Fresh and revitalised and with their finest bunch of recordings for the best part of a decade set to drop in September, their set is on a par with the masterclass that brightened up rain sodden Glastonbury a fortnight earlier. Once again heavy on the Turn On The Bright Lights and Antics material intercut with three songs from the new record and a welcome run out for 2010's 'Lights', they're fast becoming this summer's must-see festival band.

Which is more than can be said for main stage headliners Arctic Monkeys who seem to have turned into Bon Jovi, except without any of the charisma. Despite drawing a huge crowd, their set fails to elicit much of a response beyond the front six rows and once it becomes apparent they aren't going to play 'Livin' On A Prayer' (or a cover of The Beatles 'Taxman'), DiS swiftly moves on for something more energetic and danceable. Unfortunately we're one of a very small minority watching Kelis, a point which doesn't go unnoticed on Ms. Rogers herself resulting in a functional rather than fastidious performance.

The next day, DiS arrives via boat just in time to catch Parquet Courts deliver a life-affirming set to a small but enthusiastic crowd on the Heineken stage. However we're swiftly drawn across to the main stage by the arrival of MGMT, an outfit who seem to have become this generation's forgotten band. Forty-five minutes into their set its clear to see why they've faded into obscurity so quickly. While 'Time To Pretend', 'The Youth' and 'Electric Feel' still sound as vital and vibrant as when first released seven years ago, the rest of their set descended into an overblown and fairly forgettable cacophony. Which is a shame because on their day, they're an unshakeable force.

Across the way, Sam Smith is something of a revelation. Surprisingly placed halfway up the bill on the smaller Heineken stage, DiS struggles to find a spot inside the tent, such is the clamour to see him. When we do finally squeeze our way in, we're presented with something the British Isles has lacked in years; a bonafide credible solo male pop artist. As the crowd sing back every syllable of 'Money On My Mind' and his reworking of the previous night's headliners' 'Do I Wanna Know', Smith seems genuinely humble at the response. Sure, there are moments of unmistakeable cheese like when Smith asks the audience to take out their mobile phones and call up a loved one before introducing 'Latch', but when he bursts into recent number one 'Stay With Me' at the finale joined by several thousand voices in unison, it's a genuine hairs-on-the-back-of-the-neck-aloft moment.

If there's one band whose success in recent years has bemused yours truly it would have to be tonight's headliners The Black Keys and tonight is no exception. With no discernible songs of note in their armoury other than indie disco staple 'Lonely Boy', DiS swiftly moves back to the Heineken stage via the ever-popular wine bar. It's there that we're treated to a triple whammy of musically diverse but equally flawless performances. First up, Au Revoir Simone stride the axis bonding ambient electronica, wistful folk and delicate shoegaze by throwing in a host of insatiable melodies for good measure. SBTRKT also manage to confound those accusing them of being a poor on stage imitation of their recorded selves by turning in one of the weekend's most foot-friendly sets, giant inflatable dinosaur in tow. And Caribou are another level entirely. Fresh from his guest DJ slot with Jamie XX the previous evening, Daniel Snaith and band play a set befitting of tonight's headline billing on the second stage. Playing a mixture of material mainly proffered from 2010's breakthrough record Swim and the forthcoming Our Love, it's the closing one-two of 'Odessa' and 'Sun' that bring the house down.

Revitalised and heavily sunburned after a day spent lounging on Estoril beach, DiS arrives just in time to hear The War On Drugs drop 'Baby Missiles' and kick Saturday into life. It's the songs aired from this year's Lost In The Dream though that really reach the spot, and by the end we're convinced to a man they'll be vying for headline slots on bigger stages this time next year. Unknown Mortal Orchestra also seem to have developed a new lease of life since DiS last saw them eleven months ago at Green Man festival. Oozing a heavier sound than previously associated with them, Ruban Nielson and co. seem suited to their new direction like hand and glove.

DiS faves Phantogram also convey charm, sophistication and a penchant to dance over on the NOS Clubbing stage. Hyperactive singer Sarah Bartel could be an amalgam of Curve's Toni Halliday and Little Dragon's Yukimi Nagano in a parallel universe. Musically sitting somewhere between the futuristic elegance of M83, boisterous dance pop of Republica and both of the aforementioned, they're a welcome respite from Foster The People's execrable careerist pop currently emanating from the main stage.

Sadly, when the LA trio exit the stage so do half the audience, leaving final night headliners and only exclusive booking of the festival The Libertines playing to one of the smallest main stage crowds of the entire weekend. If 2010's reunion didn't quite live up to expectations, it seems the London four-piece aren't taking any chances this time round. Clearly rehearsed and by the look of things on seemingly good terms, they've turned into a well-oiled machine far tighter than one could have imagined four years ago. 'Horrorshow' sparks a mini riot near the front while a sea of arms wave for 'Music When The Lights Go Out'. 'Time For Heroes' produces the first big singalong of the evening which continues until the encore where 'Up The Bracket', 'What A Waster' and 'I Get Along' bring their set to a memorable and hugely enjoyable finale.

With the festival almost over, it's left to New York DJ, musician and producer Nicolas Jaar to bring Optimus Alive 2014 to a euphoric close. Playing a set crossing several genre boundaries from drone-heavy spacerock to pulsating techno without uttering a single word between songs, his performance feels anything but muted out front among the heaving masses. By the end, sweat dripping from our over-exerted bodies, it's fair to say we've had it large.

Thank you Lisbon until next year, same time same place.