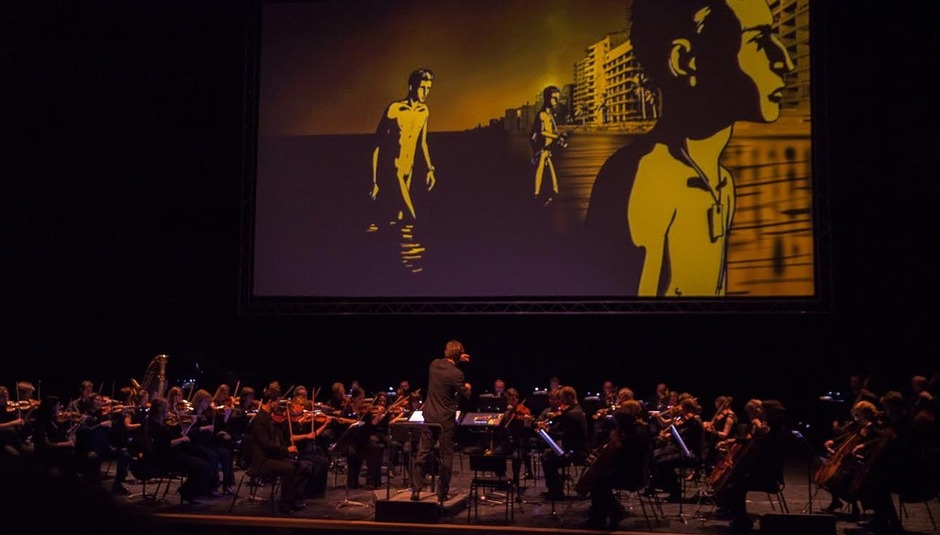 Two nights and two very different film screenings at Meltdown 2014, each accompanied by a live orchestra and the score's composer. For a festival that prides itself on the splicing of mediums and confluence of artistic talents, such pairings make perfect sense.

For someone who's never seen a film soundtracked in such an indulgent way, this is a real treat, especially in a room as visually and acoustically pleasing as the Queen Elizabeth Hall. For the most part it's the spectacle of the movies themselves that commands your attention rather than the assembled players. But alongside this there are those truly special moments where the score rears up and slaps you round the chops, and BOOM, the impact of live music reasserts itself. Perhaps it's just a product of the world we're living in, where images have a bottomless reservoir of meaning attached to them; regardless, it's something joyous when the sound drags your eyes from the screen.

Of course, it's not supposed to be a battle, and most of the time it's not. In Waltz With Bashir in particular, the film's emotional impact is massively intensified by the score. Max Richter's powerful compositions take on a whole new dimension in the flesh, particularly the aching melancholy of the central motif, The Haunted Ocean. The lead violinist tonight is utterly spellbinding, spinning out the central melody with a gossamer touch. The deep blasts of the horns swell and engulf the senses to spine-tingling effect.

Some of the more contemporary touches that make Richter's score so compelling are lost in translation; restricted by the film itself, the full breadth of the amazing Shadow Journal can't be realised, for example. There are moments when Waltz With Bashir's sound design works against the orchestra; this is never a big problem, but it must be said there are junctures where it almost feels redundant, and you wish you could just have the music on its own. However, when pictures and score come together perfectly (and they generally do), the power they muster is utterly jaw-dropping.

By contrast, Under the Skin's creeping strings and cold percussion plough a very different furrow to Richter's score. Mica Levi (of Micachu and the Shapes) and her players have to cover a massive range of weird, unsettling and otherworldy sounds, and they achieve it all with effortless panache. The canvas they produce is raw, tense and unsettling - an unflinching reflection of the film itself.

Like the Kubrick-esque dimension of director Jonathan Glazer's vision (delivered on screen by cinematographer Daniel Landin), Levi's score is indebted to an era when Hollywood sci-fi was plumbing some deep, dark, thrilling wells. There are touches of both 2001: A Space Odyssey and Ridley Scott's Alien in the DNA, and spliced with electronic elements it makes for a captivating experience. The soundtrack's central 'void' motif is a truly brilliant encapsulation of Under The Skin's slow-burning blend of body horror meets existential sci-fi, and gets an extensive, bruising workout.

Mostly it's simmering, squirming and willfully un-human, with the exception of the warm, yearning drones of Love, a stunning counterpoint to the overall effect. Levi's score is brilliantly conceived and performed, to the point where it prompts a scattering of standing ovations at the close.

All told, there's not a lot to be written about these two sensational screenings; there are, after all, no surprises. And that's just how it's meant to be. What curator James Lavelle has been kind enough to bring us is two great movies on sensory steroids; two groups of exceptionally talented musicians performing two cracking scores in a gorgeous setting. Sadly I'll never be able to watch either film on my shitty laptop after seeing them like this, but it's a price I'll have to pay. 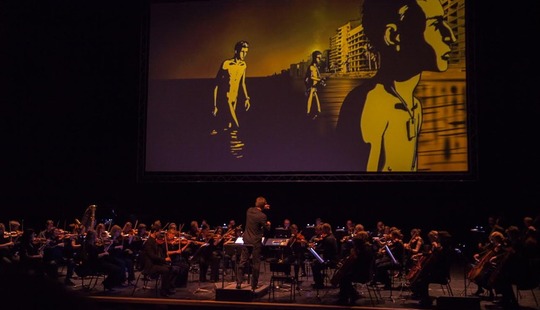 DiS meets Hospitality: "Maybe we all ...