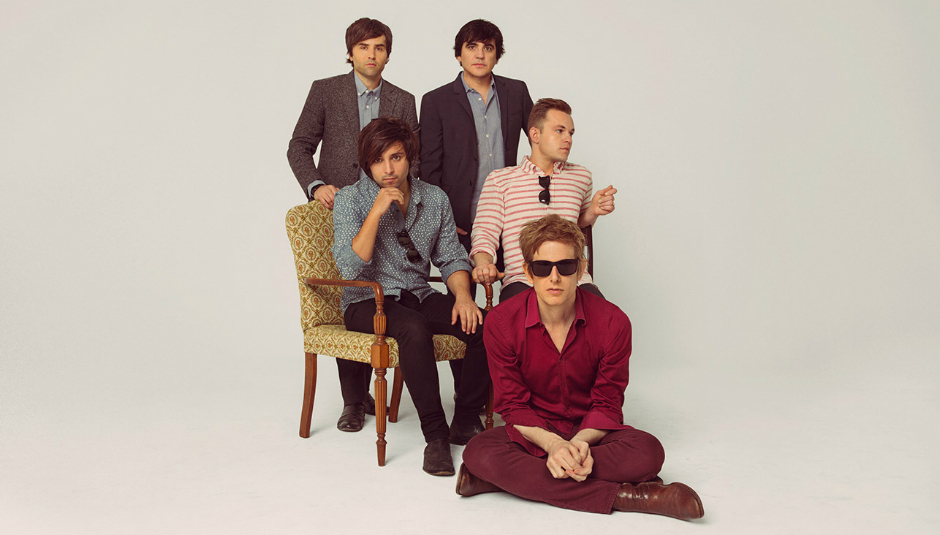 Hello and welcome to a blockbuster edition of DiS Does Singles. Why? Two of our all-time favourite bands have returned from the popular music wilderness.

Spoon and The New Pornographers are back, and they've not disappointed. What a relief.

Elsewhere, Gerard Way has unveiled the first cut from his solo career, Gems have justified their continuing hype and Alexis Taylor is an unexpectedly excellent troubadour. We've also weighed in on the latest offerings from Klaxons, Dune Rats and Peace. Oh Peace.

There are two correct responses to the announcement of a new Spoon album:

1) Who are Spoon? I must immerse myself in their immense and extensive discography, post-haste 2) There is? How did I not know about this already? I must have it, post-haste

Such is the fervour ascribed to Britt Daniel’s five-piece, they’re often referred to as a cult affair - a band without the big breakthrough they deserve. Except that’s not really the case. In America, at least, the Austin, Texas outfit’s last two albums have gone Top 10. The forthcoming They Want My Soul could feasibly be a Number 1 record, especially since it’s out on major label Loma Vista instead of independent Merge.

A record of that significance deserves a whopping great single to herald its arrival, and that’s exactly what you get from ‘Rent I Pay’. An almighty rock ‘n’ roll stomper, it’s the band’s most immediate offering since lord knows when. A primal thud of snare drum drags the track into existence and, from then onwards, you’re in for a treat of fuzzed up guitar chords, reverb-laden organ and Daniel’s snarling vocals - all of which meld together into a thrillingly singular crunch.

Spoon may have previously succumbed to big production polish, but ‘Rent I Pay’ sounds positively nasty. Revelling in gaudy squalor, it surges back and forth from loud to quiet in vulgar thrusts. Each lyrical aside revels in its devious surroundings without offering the least bit of coherence. “Out among the stars and the stones, every kinda fortune gets old,” spits Daniel with barbaric intent.

It's a masterclass in songwriting simplicity. Taut, grizzled and unconcerned with status after the group’s four year hiatus.

Spoon have aged like a corked wine, and we’re downing their new stuff in one.

Where do you start with Spoon? With seven albums spanning 18 years, everyone’s got their favourite record from Britt Daniel and co. Ours is the hook-filled Ga Ga Ga Ga Ga, but we’ve compiled this 10-track primer as a handy offering for absolute beginners.

Thought Arcade Fire were the last survivors of kitchen-sink-indie? The New Pornographers have other ideas.

That Canadian supergroup featuring Neko Case, Dan Bejar (a.k.a. Destroyer), A.C. Newman and six more members have announced their return after a four year pursuit of solo projects, and they’ve done so in fine style. ‘Brill Bruisers’ does bombast like there’s a gold medal up for grabs, interlacing whooping harmonies and grandiose power chords in a singular burst of effervescent energy. It’s the title track from TNP’s sixth album, and promises a welcome return to the giddy tones of Twin Cinema and Mass Romantic.

What we’d give for an album as good as those two... Nowhere near enough to cover the studio costs, but we’re skint and TNP may well have done the job anyway.

Say what you want about My Chemical Romance, they were never boring. After the emo titans’ demise, you wondered if Gerard Way would tone things down to draw a line under his old band. Then he went and wrote ‘Action Cat’.

As brilliant as it is preposterous, this gargantuan chunk of scuzzed-up rock is a clear departure from MCR, but not in the way you’d think. It’s gleeful, euphoric and life-affirming - the kind of song that could soundtrack a World Cup winner’s montage. “We want an astronaut decision that we can't fake,” hollers the former ‘...Black Parade’ hitmaker. “We got firecracker missions that we can't break.”

Noir-pop duo Gems have been causing such a stir on the ‘blogosphere’ that they’ve even been championed by Buzzfeed. Don’t let this dissuade you, everyone’s had excellent reason to get in a tizz - as evidenced by the beguiling ‘Scars’. A Chairlift meets Cocteau Twins affair, it sees singer Lindsay Pitts reach for some ludicrously high notes and pull them them off in simpering style.

Unlike their similarly moody contemporaries, Gems actually know their way around a chorus. Something that will no doubt help when the big money record contracts roll in.

When Alex Chilton died in March 2010, Alexis Taylor wrote a heartfelt tribute to the Big Star and Box Tops frontman. While you’d struggle to hear the influence of ‘In The Street’ or ‘The Letter’ on glitchy bangers like ‘Over And Over’, that’s not the case with the Hot Chip singer’s second solo album. ‘Without A Crutch (2)’ is a simple, honest love song could pass for a Third/Sister Lovers offcut, and that’s not praise we hand out lightly.

The most moronic music video we have seen in ages. It’s chuffing brilliant.

1656 BC: Noah builds a fuck off ark and God floods the world. 30 AD: Jesus rises from the dead after bleeding out on a giant cross. 2014 AD: Klaxons offer an EDM-inspired synth riff to prop up a resoundingly OK dance-pop song.

Divine intervention has trailed off in recent years.

When you remember Peace were churning out really exciting singles little over a year ago, it’s thoroughly depressing just how quickly they’ve burned out. Harry Koisser and co are not and never were ‘the future of music’ but, beyond their Britpop stylings, they had the makings of a band who might outlast the hype.

As the rushed response to all those naysayers, ‘Money’ could barely be less convincing. Its chorus is dire (“Money… Do you eat it when you’re hungry?”), and alarms bells were ringing as soon as its ‘funky’ guitar line rang in. A dreadful song that should never have been let out of the studio.

"We never plan our music to fit any s...