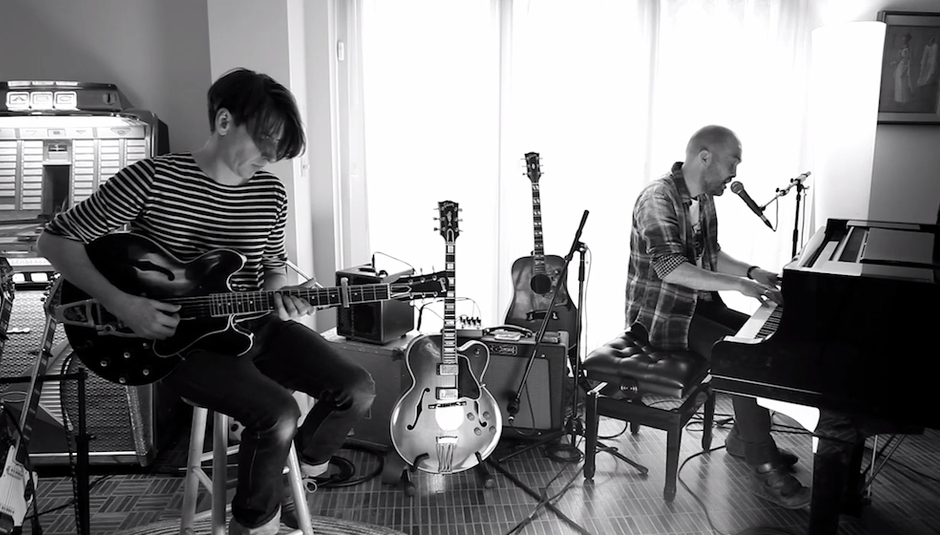 Bernard Butler interviews his new bandmate Ben Watt (Everything but the Girl)...

"I met Bernard at a barbecue in the rain two years ago. We tiptoed round each other. We seemed, however, to be in a similar space. Each of us had spent ten years away from guitar-playing - me as a DJ and label boss, him as producer and songwriter. We each seemed to want to play guitar again, in a simple uncomplicated way. We then met at my place and jammed one afternoon but it didn’t quite gel. And then I wrote the songs for Hendra and we met again last spring and this time I had a strong idea of how it could work. My open suspended folk tunings against his bluesy overdriven guitar - and that was when it really clicked. We played a couple of one-off shows at a folk n’ blues basement in Clerkenwell last August to road test the songs and the approach. It went over really well. And then after the album was recorded last autumn we started going out as a duo, playing my songs, but improvising around them a bit, generally being loose and relaxed on it all. We would send the gear on ahead in a van with a guitar tech, and then just catch the train around the country from gig to gig. We’ve got on well. We don’t talk too much about the music we play, just let it emerge each night. In the meantime Bernard’s run the London marathon - which is pretty hardcore - and I’ve endured another season watching Barnet, which might actually be worse. I asked him to set me ten questions. He spent ages over it until I was certain he was trying to trick me. Anyway, this is what he came up with..."

BB: Which of your songs was on my marathon playlist?

BW: The one you listened to when you ran the London marathon? Blimey. Ummm. Well, if you were looking for a tempo-appropriate track then something in the 80-85bpm range might work, and on that basis, I can't think of anything. When I run, which is not very often, I have been known to run to Neil Young's 'Down by the River' which is both slow enough to suit my sluggish style and diverting enough will also those broken up distorted solos. Maybe you chose your favourite off 'Hendra' which I think is 'Forget' so that might be the best choice. Or maybe you went all retro and picked something you knew from the old days either to give you a burst of sentimental energy or even a spurt of disgust. What about that one we did with Johnny Marr on harmonica? 'Native Land'? Am I getting close? Maybe it's a trick question and you had nothing on there except for Foreigner and A Flock of Seagulls for all I know.

BW: A good question for a seasoned train traveller like myself. I've done a fair amount of Pendolino travel this year, up to Glasgow and back a few times. The air conditioning can be a bit noisy sometimes. And it is never advisable under any circumstance to go for a piss standing up on a Pendolino, especially when cornering at 200mph. The East Coast line feels a bit swankier. It might just be the colour-coding of the upholstery. It also does Yorkshire Tea and a good selection of biscuits on the trolley. So the choice is a hard one. To be honest, some of my favourite journeys on tour this year have been on the slow stopping trains that Northern Rail do. No service to speak of but you get to see real life going by: great scenery; families in their Easter best visiting relatives; teen lovers. I like all that kind of stuff.

BB: Is this like the good old days of Underhill?

BW: Is what like the good old of Underhill? Our current UK tour together? First off I should admit to being a relatively new fan of Barnet. I supported Chelsea as a kid growing up in south-west London, but started going to Underhill [Barnet's old home ground] when my boy, Blake, got interested in football about four years ago and we wanted a local team to support. Having said that I have become a somewhat vocal supporter of the Bees since then. But if you are talking about the good old days I am not sure Barnet have had them since I've been supporting them. I watched them survive relegation to the non-league on the last day of the season twice - quite exciting actually - before finally going down last year. Mind you, there is simple honesty to the way we are touring the country at the moment that is a bit like lower league football. Small dedicated crowds. Close proximity to the action. Going out there and just expressing ourselves. Maybe we should run out onto the stage to a particular song each night. Barnet run out to Guns n' Roses' 'Sweet Child of Mine'. I followed Northampton Town for a couple of years in the late eighties for reasons not worth going into here, and they ran out to 'It's a Kind of Magic' which was both a lie but also quite poignant. Straight from the kick-off if they retained possession and crossed the halfway-line the crowd used to shout 'Shoot.'

BB: Do you ever think of a person when you hit a particular chord shape?

BW: A good question. Straight-forward G-major reminds me of Bob Dylan's 'Blowin' in the Wind' which might have been the first song I ever learnt back in the mid-70s. Aminor9 played with only two fingers on the 3rd and 4th string on the 5th fret reminds me of Tracey and separately of The Go Betweens' Robert Forster. Tracey used to play it all the time in days when we first met and she was writing 'A Distant Shore', and later I showed it to Robert with a couple of related descending chords and he used them to write 'Bow Down'. There's an inversion of Em9 I use that reminds me of John Martyn and there are some jazz shapes like sevenths with augmented fifths, and clean thirteenths that remind me of Joe Pass and a book of chords my dad gave me when I was learning. If you play in open G tuning you immediately sound like Keith Richards, by the way.

BB: Have you missed out by not being in a regular band line up ? Lucky escape ?

BW: I sometimes wonder what it would have been like to be in a four-piece guitar band. Like a gang. But the opportunity barely arose. My first band at school was a bit like that and there was tension even then. Lead singer anguish. I was the guitarist. But as soon as discovered I self-accompaniment, and developing a rich self-sustaining sound using hollow-body guitars and delays and echo I knew I largely want to be self-expressive. Of course that changed when I met Tracey and we went into a project we thought would only last two months and it lasted twenty years. But lately I guess I am reconnecting with my nineteen year-old self, the version of myself who put aside an emerging solo career to form a duo all those years ago. And oddly, it feels very similar. I like the way the buck stops with me.

BB: You wrote 'Romany and Tom'. Which one of your children will write 'Tracey and Ben'?

BW: None, because I have laid fuses and detonators all around the garage than will spontaneously explode as soon as my will is opened.

BB: What do you think you're playing at? At your age?

BW: I get that same look from my kids. A gig, dad? Really? They think it is 'sweet' which is partonising sarcasm from a teenager. But yes, I am aware I am entering new waters. I have gone beyond the exclusion zone of rock n roll. I am a veteran artist, which of course I hope means seasoned grandmaster, not forgotten old-timer. But rock just has to get used to it. Blues did. Jazz did. Songs have meaning at all ages. I sing songs of experience now. My nineteen year-old self sang songs of innocence. I look out into the audience and see people like myself who have taken the blows of life and are still there standing and I respect them. I am living proof that resilience mixed with hope is an aspirational life choice.

BB: Do you fancy playing some guitar? See what happens?

BW: That is a great chat-up line, actually. I pretty much used it on Tracey when we first met. I met her in Hull on our first night at university there. In fact I had her paged over the University tannoy system. We both knew the other would be there; we were each signed independently to Cherry Red down in London as teenagers, her with Marine Girls, me solo. We hadn't met but we each knew the other would be arriving in Hull at the same time. The porter's voice rang out over the system: 'If Tracey of the Marine Girls is in the building, could she please come to reception now.' When she arrived, I tried to look cool and asked her if she knew who I was. 'I assume you're Ben Watt,' she said. 'That's right,' I said. 'Have you brought your guitar?' So, you see I haven't changed much. It's pretty much what I asked you when we met at that barbecue in the rain a couple of years ago. Always hopeful.

Hendra is out now via Caroline.

In Photos: These New Puritans @ The B...

Life on the Road: Gruff Rhys on his f...