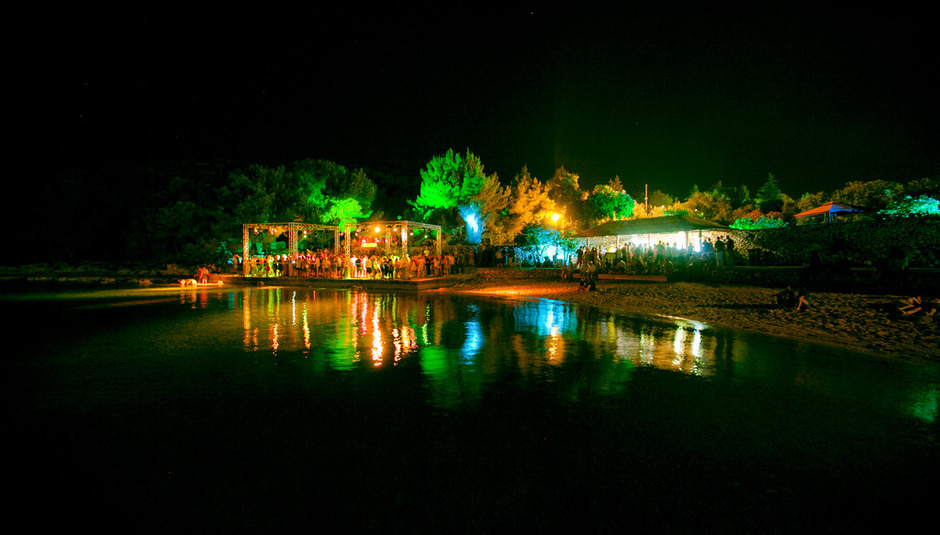 This summer, DiS will be jetting off to a beautiful little spot on the West side of Croatia for both The Garden Festival and Electric Elephant Festival – running consecutively from July 2-9 and 10-14 respectively. Though two separate festivals in name, the two are closely linked in that they’re organised through a similar team, boast a similar crop of electronic artists, DJs and soundsystems and are, of course, in the same location. Placed on the Adriatic Sea amongst multiple idyllic islands, the festivals have acquired a reputation as a perfect getaway for fans of electronic, funk, disco and house music – located in blazing sunshine with daily boat parties carrying the music and enthusiasm onto the waves.

As a lead-in to the two festivals and to understand a little more about the ethos and organisation, DiS caught up with Eddie O’Callaghan, the lead organiser of The Garden Festival and Huw Morgan, who co-ordinates Electric Elephant to ask them about the history of the festival, the challenges of putting an event on overseas and what they’re expecting from 2014’s event.

DiS: Just to set the history, how did The Garden Festival and Electric Elephant festivals originally get started?

Huw Morgan: Electric Elephant started in 2008 after we fancied a holiday away from the rainy city of Manchester!

Eddie O’Callaghan: My business partners Nick and Charlotte Colgan first came here to visit friends back in 2004 and were so knocked out by the place that they opened a lounge bar in Zadar called The Garden Zadar, and from this success more friends came to visit. Many of these friends had long histories in promoting underground dance music, so when the beer started flowing the dreams of bringing music and people we loved together in the sunshine of the stunning Adriatic began to take form. The first Garden Festival was back in 2006 in Petrcane, and although only 300-odd were able to make the trip it was such a blast that those true party pioneers soon spread the secret to like-minded friends, and it has steadily grown from there each year. We were the first festival which has inspired the now huge scene you see in Croatia now – it will be our tenth anniversary next year which is very exciting!

DiS: Why Croatia? How did you end up picking the location?

EOC: Croatia is amazingly beautiful, and back then it felt really quite exotic and undiscovered, especially to a younger crowd who had been put off coming by the troubles back in the Nineties. The first venue we came across almost accidentally: it hadn’t been used for years since being built on a lovely pine-shaded peninsula jutting into the Adriatic. By this point The Garden Zadar had built a good reputation, and based on this the site owners in Petrcane were happy to let us breathe some new life into what we had found there.

HM: Simple really - Nick and Eddie of the Garden Festival invited us along and it grew from there.

DiS: Was there anything you particularly based the setup and layout of the two festivals on – in terms of other festivals and other events you’d experienced?

EOC: Not really, the intimate capacity of the site was only 2,500 so what we were hoping for was a really groovy seaside party using all of the amazing opportunities given to us such as constant sunshine, the crystal clear sea and the chance to dance all night till dawn without getting closed down, sound-tracked by some brilliant DJs and live guests. All the things that we hadn’t experienced at festivals back then in the UK, basically!

HM: The site layout and setup is very much Eddie and Nick’s baby. It’s a very unique setting there – the sea, the beach, the boat parties, main stage and beach bar - and the amazing outdoor club, Barbarella’s. It does take people’s breath away.

DiS: Having put a few small events on in the UK and helped out with a couple of local festivals, I can only imagine the logistics of trying to run a festival abroad! What do you find most challenging about trying to co-ordinate a festival from the UK?

HM: Biggest challenge for us is booking all the flights I would say.

EOC: We don’t – we all live here! We have lived in Croatia with our families for the last decade – most other festival promoters here are based in the UK, but we have made our lives here. Logistically it can be difficult but we have a great team both here in Croatia and in the UK who always make sure the show goes on each year.

DiS: When do you usually start booking the acts and the DJs for the festivals?

HM: This usually starts on the flight home from the festival! We are always thinking of different people to bring to Elephant – this year we are really happy with our bookings, especially with debuts from Tom Findlay (Groove Armada), Simian Mobile Disco DJing, Derrick May and Chez Damier, plus lots of interesting stuff including Awesome Tapes From Africa and The Emperor Machine.

EOC: We try to have the line up pretty much booked and announced by the middle of Jan which is when many people will be making summer plans.

DiS: What’s the biggest challenge you’ve faced in trying to put either of the festivals on?

EOC: Being forced to find a new venue on short notice takes some beating! This happened to us two years ago, but thankfully the feedback from everyone is that The Garden Tisno is an even better site than Petrcane. We now have a main stage and a beach terrace right on the ocean, the boat parties leave from our own private bay and we have all sorts of onsite accommodation options from air conditioned apartments, luxury tents to Podpads. And of course the fabulous outdoor nightclub Barbarella’s, when you can dance under the stars till dawn.

HM: Every year is a challenge, but then I think this is the same for anyone who runs a festival too, whether here or elsewhere. The challenge is what keeps us focused too.

DiS: Do you see a difference between the types of people who go to each festival, or would you say there’s a certain amount of crossover?

EOC: Garden is usually a bit of a younger crowd but there is always a big crossover confirmed by the fact that we do Double Whammy tickets at a big discount for those coming to both events and they are always popular. Two full weeks of partying could sound like a challenge, but there are so many ways to relax and recover here, such as trips to waterfalls or the nearby islands or historic cities of Zadar, Split and Sibenik, and more adventures that people can dip in and out of the wildness, and have a complete holiday experience into the bargain. This is something which we think really captures everyone’s imagination – having an amazing festival experience and holiday as one whole.

HM: There’s some crossover definitely, but each festival has its own very unique tribes too.

DiS: One of the highlights of Electric Elephant and the Garden Festival is undoubtedly the boat parties. For those who don’t know, can you explain what they are, and how the idea originally came about?

EOC: Many of us involved in The Garden Festival have a long history with boat parties dating back to our time in San Francisco in the Nineties where we would put on regular parties around the bay. There really is nothing like partying out on the water – it’s an extraordinary shared experience and much loved by all who come to us. They have become an essential part of the event for pretty much everyone who comes to The Garden Festival and Electric Elephant.

HM: The boat parties do what they say on the tin (or hull); some of the world’s best DJs, 200 people and the sun sparkled Adriatic Sea. You can’t beat them, they're a real highlight for everyone.

DiS: There seems to be a real camaraderie and spirit around people who go to the two festivals, the sort of thing I’ve only really experienced from Glastonbury-goers. What do you think is the reason for this?

EOC: Building gradually our following from those first few hundred has been very important so we can retain an intimacy and a family feeling that festivals who just want to grow and grow will always sacrifice. Having pretty much reached what we consider a comfortable capacity we put the emphasis on quality over quantity. We try and avoid the trap of putting on big name artists solely for their commercial potential and concentrate on those who are hugely respected or are breaking new ground. This tends to ensure that festival goers are genuine music lovers and are coming for all the right reasons. The sense of family is really important to us, in that everyone is welcome – and I do think people really feel this, too.

HM: I think that’s an ethos we both share and it goes all the way to the artists too; there’s no VIP areas so everyone mixes together and think that really does help create a really laid back and one big family kind of vibe. I think everyone who comes to Electric or The Garden Festival really gets this and feels what we are about – everyone is together, which is special.

DiS: And finally, from the artists already booked, can you pick three 'must see' acts for both the Garden Festival and Electric Elephant, when July comes around?

EOC: Ok - I will pick ones that you may not have heard much of but I think will be fabulous for The Garden Festival. Paqua playing live, Phil Mison playing at sunset and The Revenge closing the beach stage on Friday will be brilliant, we are chuffed to have them all playing as well as all of our amazing guests across the whole week.

HM: There is loads to choose from! I would have to say Francois K’s six-hour Balearic beach bar set will be pretty special. Also Derrick May in Barbarella’s we are very excited about, and Numero DJs – home to one of the world’s best re-issue labels. Definitely check these guys out.

The Garden Festival 2014 runs July 2-9th and features live sets from Crazy P Soundsystem, Genius of Time, Kink, Paqua, Quantic Live and Session Victim, alongside a plethora of DJs including Bicep, Ben UFO, Eats Everything, Futureboogie DJs, Craig Richards, Tiago, Pardon My French DJs, Rollerboys Theo Parrish (live), Greg Wilson, Soul Clap, Wolf and Lamb and Prosumer. Full details are available here. Tickets are priced from £120 for week passes. Discounts of £20 are available for those who also book accommodation on site, a variety of apartments and camping options are available from this website.

For those who really want to party hard, there’s the opportunity to purchase a Double Whammy ticket for £150, allowing two full weeks of partying at both The Garden Festival and Electric Elephant.