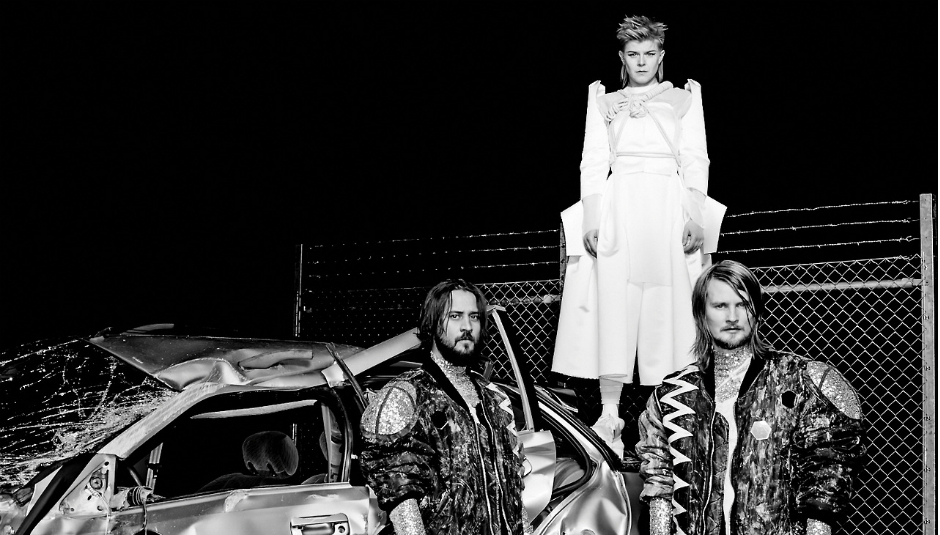 Hello. Welcome to a brand new edition of DiS Does Singles. Drowned In Sound's best-loved round up of the past seven days in music.

This week, we've gone collaborations crazy after Dutch Uncles did a stonking remix of Paramore's 'Ain't It Fun'. As if that wasn't exciting enough, Hot Chip's Joe Goddard and Raf Daddy of DJing fame have also reignited their splendid house revival project, The 2 Bears. Elsewhere, we've got the latest offerings from Florrie, Cheerleader, Boots and Flyte. They're quite excellent, but we would say that, wouldn't we?

Most importantly, Robyn is back with an absolute banger. 'Do It Again', the first full offering from her collaborative EP with Röyksopp, is Single Of The Week. Those Swedes sure do know their pop.

Do It Again (Dog Triumph)

"I don't trust anyone who doesn't have a hint of nostalgia to them."

That’s what Röyksopp’s Torbjørn Brundtland said to The Guardian in 2009, when the Swedish electronic duo were promoting ‘The Girl And The Robot’. That first, almighty collaboration with Robyn spawned another a year later, the swaggering ‘None Of Dem’, and now ‘Do It Again’ is the title track from a joint EP by the two acts. Clearly these compatriots just can’t keep away from each other, and with good reason too.

If all you know of Brundtland and Svein Berge is the icy sway of ‘Eple’ or ‘So Easy’s laid back rumble, then you need to catch up. Since then, they’ve branched out in more immediate directions with collaborators like Lykke Li and George Clinton before drifting back to ambiance with 2010’s Senior. As for Robyn, she’s never sounded weirder than when working with Röyksopp. Their EP’s opening track, ‘Monument’, is a near-10 minute boogiethon inspired by a Juliana Cerqueira Leite sculpture.

There’s no such faffing around on ‘Do It Again’. One by one, crunching synths lines are layered on top of of each other like a giant rave-pop Jenga block. Then, when Robyn’s at her most maudlin, they fall to the floor with metronomic precision. It’s a no-holds-barred barrage of danceability, and even Annie Mac’s radio presenting pitter patter won’t stop you bopping along in full approval.

In the same week that The Libertines reunited to pay Pete Doherty’s alimony bill and one newspaper live-blogged Liam Gallagher tweeting ‘Oasis’, Röyksopp & Robyn have offered a welcome riposte to such tosh. ‘Do It Again’ shows there’s more to nostalgia than simply repeating yourself.

In honour of Röyksopp & Robyn’s latest musical lovechild, we’ve made a playlist of the best collaborations we could remember. Give it a spin to hear Robert Smith & Crystal Castles, Jamie xx & Gil Scott Heron, and Morrissey & Siouxsie Sioux all perform together like it’s their day jobs. Alas, Lou Reed & Metallica just the missed cut...

Best Of The Rest

Yup. You read that right. That lithe indie four-piece with a thirst for weird time signatures and preening dance moves have remixed a Paramore song. How? The Marple-born gang were cited by guitarist Taylor York as a major influence on his band’s fourth album, and even supported them on their recent European tour.

So far, so WTF. And that’s before you’ve even heard the re-jiggery-pokery. A trad-emo outburst of big shimmering guitars and bruised self-esteem has been transformed into something altogether more… funky. If submissions for The Breakfast Club’s soundtrack hadn’t closed 30 odd years ago, this would be a sure bet to feature alongside Judd Nelson’s angsty scowl. Synths parp, bass grooves and a gurn trembles across our lips as though it’s Bank Holiday Monday again and we’re about to snaffle up some cut-price Easter eggs. Well done everyone.

Depending on your opinion, Hot Chip side-projects are largely: intellectual pilgrimages to dance music’s outer fringes or interminable drivel. The exception proving this rule is Joe Goddard and Raphael Rundell’s The 2 Bears. Their first house-infused single, ‘Bear Hug’, was a cheery play on how embracing a grizzled marsupial isn’t dissimilar to doing the nasty, and they’ve not stopped with the dizzying silliness since then.

As the first cut from this year’s forthcoming The Night Is Young, #philosophy, ‘Angel’ is pleasingly upbeat and only slightly more mature than what came before. “I need an angel to touch and tell me it’s all going to be alright,” croons Rundell with simpering sincerity. Pending divine approval, this writer’s hearty thumbs up will have to do instead.

Florrie has been around for a fair old time now without releasing an album. Her first EP came out back in 2010, when One Direction were on the X Factor and David Cameron was yet to truly prove his disdain for poor people. Nowadays, 1D are a global phenomenon, DC feeds on the tears of starving orphans and Florrie’s forth EP Sirens is due out this week.

One of those statements may be false but, last time we checked iTunes, Xenomania’s former in-house drummer is no liar. She’s definitely back and now has the support of Sony Music to help make her a proper popstar. As such, ‘Free Falling’ is an exercise in rebranding as much as it is anything else. Sacrificing a supermassive chorus to tease with songwriting instead, “Here I am I sing the verse.” It’s the kind of song you’d expect from Sky Ferreira or Charli XCX if they were shorn of a few of their rough edges.

If you thought the new Foster The People album was regrettably forgettable, then give Cheerleader’s ‘Perfect Vision’ a spin. Straight up indie-pop with a lo-fi twist, this little beauty bops along at an utterly rampant pace; buzzed up on its own lovestruck fuzz and delectable guitar solos. It’s out on the much-lauded Young & Lost Club, who’ve introduced the world to the likes of Everything Everything, Noah And The Whale and, erm, Bastille. Expect to see this all over the Radio 1 A-list on its inevitable re-release next year.

Boots is a cryptic fellow from New York who sounds like Sampha and contributed to seven songs on the new Beyoncé album. Because he can now afford to never work again, this downtempo offering featuring plaintive piano chords and Mrs. Carter herself has been chucked upon Soundcloud as a charity download. Pay 60p and not only will it benefit the Day One charity for preventing teen dating violence, you’ll also get to hear some impeccable falsetto action. A good deal all round.

We Are The Rain (paradYse Records)

There will always be a special place in our heart for bands like Flyte. Bands who wear skinny jeans and four-piece harmonies like a uniform. Bands who think that sitting half-naked on a chair in the middle of Piccadilly Circus is an appropriate use of anyone’s time. Bands who’d be signed to Sarah Records if it was still around, but continue to be daft and fey anyway. Normcore champions who've never heard of the word, and would run a mile if you explained it to them.

Homage vs cultural appropriation - it’s the comment section debate that’s keeping tabloid writers in business. Miley Cyrus, Lily Allen, Sky Ferreira, Katy Perry and Avril Lavigne have all succumbed to some variation on the ‘Is [artist’s] new video racist?’ headline over the past year or so, and where there’s controversy there are clicks.

Leaving aside the pop’s inherent lack of subtlety and why female popstars are uniquely to blame for this issue, Avril Lavigne’s ‘Hello Kitty’ video remains epicly misguided. Where Charli XCX’s ‘Superlove’ promo saw the pop starlet similarly traipsing around Tokyo, Lavigne takes a more underhand approach to kawaii culture. Everything that Westerners might deem weird or different about Japan is used to prop up a song that flits erratically between brostep breakdowns and punk-pop power chords. Even being served sushi is a cause for clapping your hands together in euphoria.

The end result can be held up as a clear low when it comes to cribbing from non-white culture, and a tragic deterrent against ‘paying tribute’ to it again. And that’s why Calvin Harris’ ‘Summer’ sticks with a classic gaggle of bikini-clad women instead...