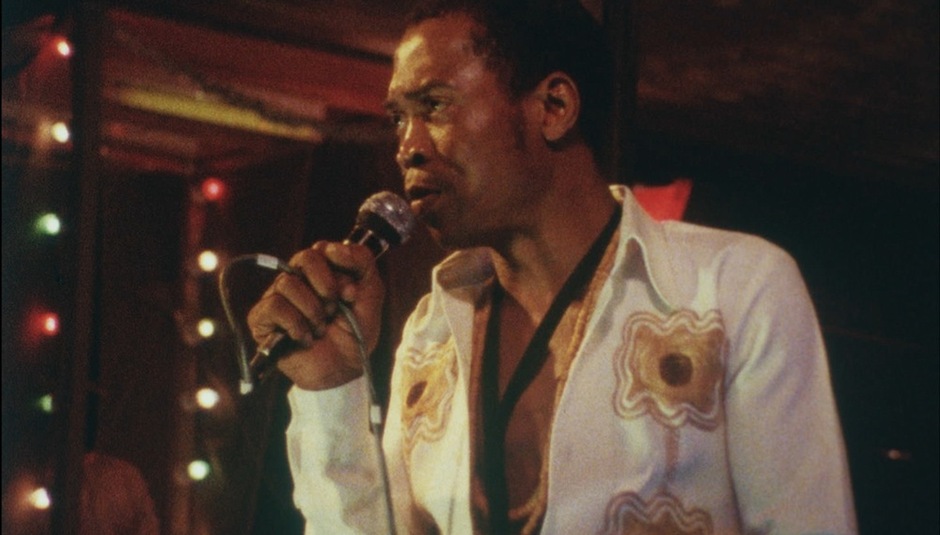 If Finding Fela! lets any one idea bubble to the surface, it's that Afrobeat proved a powerful political flail. Alex Gibney’s (We Steal Secrets: The Story of Wikileaks; Enron: The Smartest Guys in the Room) documentary about the genre's pioneer, Fela Kuti [above], is rightly intent on acknowledging Kuti's fearlessly persistent music-making in the face of an oppressive Nigerian regime. Heaps of archive material helps document the relentless glow of Kuti's political spark, and it's all set amongst a backdrop of rehearsal footage from the 2009 Broadway show about his life (Fela!), as the cast and crew try to recapture it.

But amongst tales of persecution and corruption, Gibney also lets another aspect of the music peek through. Afrobeat is a cyclic and hypnotic music, one that let its practitioners get out of their own heads and away from worldly experience altogether. It takes them to a mystic place that has little to do with Kuti's indignant political activism. Or, in the words of Africa '70 drummer Tony Allen: “I just wanted to play my fucking drums and trip.”

This pull of music in opposite directions—toward tangible human experience, and toward the ineffable and indefinable, toward tripping—seems to hit upon a theme running through the small sliver of Sundance London that Drowned in Sound takes in. The Euro-annex of the Utah independent film festival, now in its third year, has once again set up shop in the oddly incongruous, eyebrow-raising surroundings of the O2's Cineworld complex. It's a booking decision which leads to a rare crossing-of-paths between the capital's film buffs and its McBusted fans on Saturday night.

But while the tween-pop supergroup's fans might be filing into the vapid megadome, this year’s Sundance programme isn’t without its own fair share of big draws: Michael Fassbender’s papier-mâché'd turn in Lenny Abrahamson's Frank; David Cross’ hipster-goading, Michael Cera-starring flick Hits; Michael Winterbottom's revival of Steve Coogan and Rob Brydon's on-screen partnership in The Trip to Italy. But Sundance London goes beyond film alone. It also pays due service to music, whether through music documentaries, the live performances that run alongside the film program, or panels that explore its complex relationship with film.

Tim Sutton’s meandering, abstracted, and unapologetically singular Memphis is certainly ‘about’ music in one sense or another. Willis Earl Beal plays a partly-fictitious version of himself (how close to the truth it is we're not quite sure), and the film loosely follows the enigmatic singer through a period of artistic crisis. It's an ambitious film that feels like it might have some lofty things to say about the ‘Plight of the Artist,’ of chasing abstract musical ideals, and the equation of music with spirituality and magic. But the narrative-less, impressionistic, daydreaming film is so vague that it fails to say anything concrete at all. All it can do is hint: hint that the indescribable ideal of Beal's music (given tangible presence through Beal's lo-fi, spectral-gospel score) is slipping out of reach, hint that the musician is losing sight of reality. “All life is artifice,” Beal laments in the opening sequence.

The theme of music as indescribable, of being beyond the grasp of language, is picked up—albeit from a completely different angle—at Saturday’s film music panel, The Art of Film Music. The three composers who make up the panel (Javier Navarrete [Pan’s Labyrinth], Alex Heffes [Mandela: Long Walk to Freedom], and Sundance Film Music Program director Peter Golub [Frozen River]) soon find an interesting talking point in director-composer dialogues. Evidently, there are problems encountered when a musically mute director tries to explain what he or she wants from a composer. “I'd rather directors talk to me more like an actor,” admits Heffes. It's an illuminating session punctuated by clips from Navarrete and Heffes' films, and goes just a little way to show how soundtracks are conventionally factored into the filmmaking process.

The relationship gets subverted one more time at Sunday's panel, Hybrid Vigour: When Music, Art and Documentary Collide, which looks at the way the rules of (music and music-related) documentary making have been bent and broken. Creative minds behind a trio of hybrid music documentaries are involved, including Iain Forsyth and Jane Pollard, whose 20,000 Days on Earth, a fictitious twenty-four hours in the life of Nick Cave, sees a general release later this year (lunch at Warren Ellis' house and Kylie Minogue cameo included).

Despite the documentary tag, the pair also seem to prefer their music, and the artists that create it, to occupy a kind of fantasy world. In 20,000 Days on Earth, they favour to herald the persona that Cave has spent decades crafting, rather than the human responsible for it. “We didn't just want to film Nick doing the dishes and hope that it would reveal something insightful,” admits Forsyth.

Jarvis Cocker and Martin Wallace are also on board, but their BFI National Archive footage film The Big Melt deals with something altogether more grounded in concrete (steely) reality. The film focusses on Sheffield’s steel works, on working class pride and stubborn community spirit.

Unsurprisingly, Cocker seems particularly fond of the affront of heavy industry, and is quick to point to a kid flipping the V-sign toward the camera (think Kes) as a favourite moment. The sense of community is only helped along by Cocker's 50+ person score (footage from a performance of which is screened here), which includes members of PULP, Richard Hawley, The Verve and The Human League.

Far right, Orange Juice’s Edwyn Collins sits alongside wife Grace Maxwell and filmmakers Edward Lovelace and James Hall, who documented Collins' recovery from the massive, near fatal cerebral haemorrhage suffered in 2005. The film they ended up with—The Possibilities are Endless—takes its title from one of the few phrases Collins was able to utter when he awoke in hospital (“yes,” “no,” and “Grace Maxwell” were the others).

For them, too, music is something borne out of reality rather than fantasy. Except, for Collins, that reality—and the memories and identity that go with it—is lost. After the songwriter's world is irreversibly shaken, there ensues a fight to reclaim language and music. It seems a highly stylised, partly-dramatised (Collins' son is cast as his former, younger self) account of a harrowing life event, one from which Collins has, and never will, fully recover. Still, today Collins' wit and sense of humour still seem in tact, even if they have been impeded by some reduction in communicative abilities. It's almost a shame nobody thought to make the all-important Orange Juice/Pulp joke.

Despite its heritage in cinema, Sundance London has plenty to offer music fans. Indeed, in and around the above, there's also performances from Axiom, Dele Sosimi and his Afrobeat Orchestra, Scott Matthews, and Goldheart Assembly. But the best of the weekend's events look at exactly where the two intersect, whether that's music for or in film, or film about music—something that's more than worth the trip to Greenwich. Even if you do end up learning what ‘Love is On the Radio’ is.