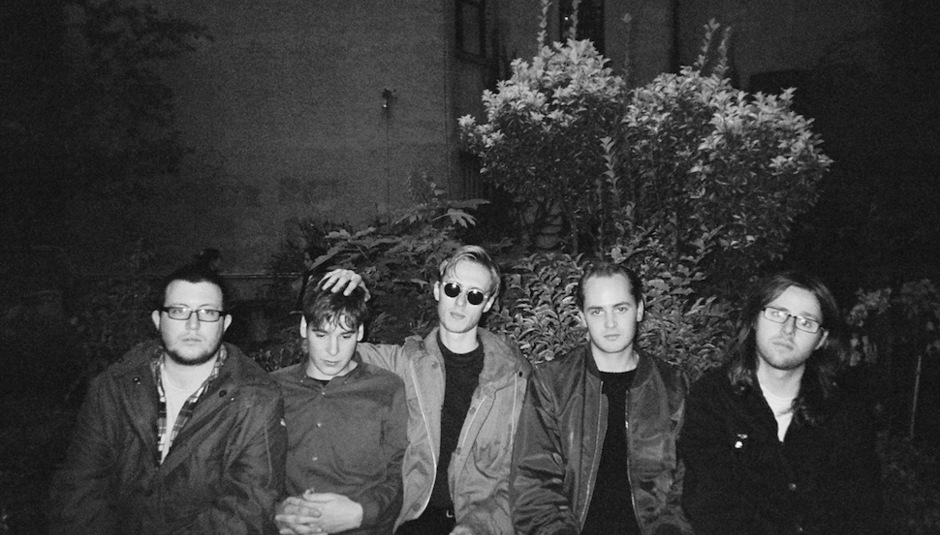 It’s been a while since I last penned this column; Leeds was preparing itself for Forward Russia’s reunion gig at the Brudenell Social Club, with a mixture of nervous anticipation and excitement from both fans and band. During excellent openers This Et Al the band could be seen calmly and quietly preparing themselves, and I wondered if they’d have lost some of the intense passion that propelled them to cult band status last decade now that time has marched on. I stopped worrying the second Tom manically burst onto the stage in the trademark t-shirt, eyes-glazed and once again seemingly possessed by his old cable twisting demon. They were truly brilliant and a reminder that a lot of the current crop really could up their game. The band must have been pleased with how it went too, as they’ve been coaxed out for one more special ‘Dance To The Radio’ curated gig at Leeds Town Hall as part of Live at Leeds Festival in May. Where they will be joined by I Like Trains (playing a reflective 10th anniversary set), Lanterns on the Lake and Sam Airey. If you want to get a taste for what’s in store, Forward Russia have made the audio from their Brudenell gig available on their bandcamp here.

There have been plenty of other announcements for Live at Leeds too, and it genuinely seems like their best line-up yet. Having managed to pull together a strong bill that will draw people from all scenes, with confirmations so far including The Hold Steady, Blood Red Shoes, Fuck Buttons, Neurosis, Albert Hammond Jr and plenty more listed here. Happening across the first May Bank Holiday weekend it looks like great value for £25.

Alternatively if you prefer your all-dayers to have less ego preening and more eclecticism, there is another round of the infamous British Wildlife Festival happening at the Brudenell Social Club 7-9th March. Typically the line-up is crammed full of bands from across the globe, offering plenty of bang for a small amount of buck. It includes some of my favourites such as Cowtown, Two Trick Horse and The Witch Hunt, but there are undoubtedly plenty of new discoveries to be made courtesy of its roving curator Adam Nodwell. Take a look at the full line-up and checkout some of the acts playing here.

After last year’s big success, Beacons Festival have announced another line-up that looks to see them continue on an upwards tangent. They strive to curate their festival holistically, rather than booking big names with an undercard of their managers/labels’ fledgling projects. Therefore it sees varied evening headliners of Darkside, Daughter, Jon Hopkins and The Fall balanced with a deluge of ace bands such as Sweet Baboo, Traams, East India Youth, Autobahn (below) and Melt Yourself Down scheduled throughout the day. As a result it doesn’t feel like the day is just building towards the later artists like at some festivals; proven by Hookworms triumphant set last year when they flooded the main stage tent with both people and glorious pysch-rock. Website

Another new alldayer festival has sprung up recently under the name Gold Sounds Festival which will be setting up camp at Brudenell Social Club in the second May Bank Holiday weekend (26th). I’m particularly excited for this one as it’s headlined by Cloud Nothings who produced one of the gigs of the year when they played the venue two years ago. Plus their recent output (new track below) has made their forthcoming album into one of the most anticipated releases in 2014. Also on the bill are some of West Yorkshire’s finest - Sky Larkin, The Spills and Imp alongside the likes of Pins, Joanna Gruesome and Paws. Further details here.

Also happening across that Bank Holiday weekend is Bradford Threadfest; which temptingly describes itself as a “cross-city, multi-venue event, offering a free taste of the city’s underground and independent art, film, performance and theatre alongside live music from the region and all over the world”. Amongst the live music bookings announced so far are Japanese post-punk/krautrock trio Nisennenmondai, Leeds’ electro party-bringing duo Galaxians, and a special experimental film and music performance by the Berlin/Bradford collaborative project Polymitas. Website

With all the latest festival announcements covered I’ll now share some of my favourite recent releases and the most interesting upcoming gigs in the area, starting with newcomers Brawlers. Newly signed to Alcopop, the four-pieces have some familiar faces notable in frontman Harry Johns (Dinosaur Pile-Up/Old Romantic Killer Band) as well as members of Castrovalva, Leftover Crack and Martyr Defiled. The below track ‘Instagram Famous’ is taken form their debut EP ‘I Am A Worthless Piece of Shit’ out on 5th April, and doesn’t sound anywhere near as dejected as the EP’s title might suggest. Instead it sounds like an energised Rival Schools relishing an upbeat moment, and will supply a rousing antidote for the current culture of smugshots and burger bragging. Go see them at the Brudenell on 11th March.

Whilst on the subject of the age of online oversharing, Paul Thomas Saunders is one man who has shrewdly managed to retain an air of dark mystery that befits his majestic music. This is despite having been a steady presence in the Leeds music scene both gigging and releasing singles and EPs via his solo moniker since 2008. However until ‘Beautiful Desolation’, released 7th April, he had been in no rush to produce a long player. Instead choosing to slowly develop and evolve as a band alongside bandmate and co-producer Max Prior who has been involved in sculpting their glorious home recordings from the beginning. Their patience has paid dividends as the album is infinitely immersive – a 54 minute long cinematic dreamworld. Of the brand new material ‘In High Heels Burn It Down’ (below) is a stand out favourite, with its swathes of ethereal guitars and shimmering synths that are typical of the album. Paul and his band will be gracing Belgrave Music Hall on 11th April.

Eagulls are another band who have patiently built up towards an album - it’s been a good few years since their ‘Council Flat Blues’ single (complete with Shaggy bonus track) kicked down the doors to my conscience and they’ve squatted there ever since. Their live shows have always been notoriously fierce and furious and they have spent the time justly trying to capture this, whilst cautiously refining their raw angst alongside hooks and melodies. Album opener Nerve Endings and new single Possessed (as seen on Letterman, below) are two of the sharpest arrows to stand out in a quiver brimming with aggressive, punk anthems and cocksure swagger. Whilst their sound harks back to several prominent movements in rock and punk, it slices these in effectively with their own gritty stamp, and it’s been a while since an album has so aggressively awakened my senses. The self-titled album (out now on Partisan Records) will be launched at the Brudenell this week, although unsurprisingly it’s sold out.

As part of Live at Leeds’ Unconference industry focused events, The Association of Independent Music (AIM) will be hosting a social event in Leeds on April 9th. The evening will begin at 6pm at the Brudenell Social with a panel discussing music business funding, and looking at how local labels and artists can tap into the various sources of funding available. This will be followed by live music form both Post War Glamour Girls and The Horn The Hunt - who are currently gearing up to release their new album later this year, you can hear new single ‘Starless’ from it below. The event is free but pre-registration is necessary, do so here.

Many Leeds folk involved with local music will be well aware of Eiger Studios, with it providing a multiple purpose venue for gigs, studio recording and rehearsals space. This month they are celebrating their 5th birthday with a strong and eclectic mix of Leeds artists playing there from 7pm on Saturday 8th March, including Theme Park, Galaxians and the below trip-hop four-piece Fold. Whose ‘’Salvation’ EP constructed tranquilizing electro beats and married these effectively with vocal samples from rising poet and comedian Mr Gee to give his philosophic words further potency. Facebook event

Clawhammer Club is a recurring night of folk and blues hosted by proficient Leeds musician Grant Fennell (Cottonwoolf). They’ll be taking over Belgrave Music Hall on the 11th March with a line-up featuring both Harry Ridgway (below) and Sky Larkin’s Katie Harkin in a rare acoustic guise. Become a member of the club for discounted entry and drinks here.

With each release Battle Lines seem to be growing stronger and new single ‘Colonies’, set to be released by cult US label No Sleep on April 15th, certainly doesn’t buck that trend. A hefty slice of danceable synth-rock spearheaded with impressive surly conviction from vocalist Humphries ensures that it stays with you long after it has ended. They’ll be representing Leeds at SXSW (along with Eagulls), before playing with Seahaven at The Cockpit on 25th April.

Finally we’ll end with news that is likely to be most welcome to any Wakefield residents reading this; your city will soon be welcoming a new independent record shop. Named Wah Wah Records and situated on Brook Street, it will be opening on the 1st of April. They will be stocking plenty of local releases and Record Store Day exclusives – but remember that record shops are for life, not just for Record Store Day. So give them some social media likes on the links below, but mostly importantly give them a visit soon.

As usual if you have any new music, gig news etc you can submit it to leeds@drownedinsound.com. 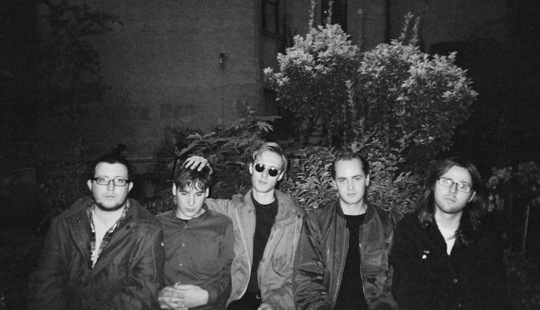 "The people of Louisville are crazy":...