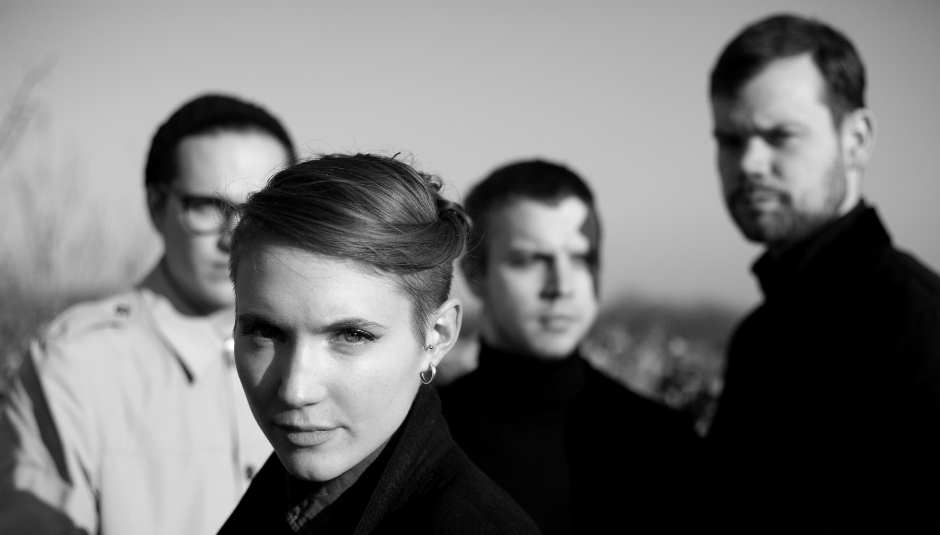 Hello. You’ve tuned into a brand new edition of DiS Does Singles. Congratulations on your excellent choice of music-related literature.

This week we’ve gone doolally for Woman’s Hour and their splendid new single ‘Her Ghost’. Having also bequeathed them with Single of the Week for the misery-laden ‘Darkest Place’, it seemed sensible to arrange a chinwag with frontwoman Fiona Burgess. She spoke about life in Lake District, John Fante and the importance of recording a debut album, instead of an EP.

That’s not all though. We’ve also assembled the latest offerings from Wild Beasts, Chvrches and Playlounge. Plus, Kanye West has done something awful again - so we wrote about that too.

Keep this to yourselves, but something very special is happening with Woman’s Hour.

Since returning from self-imposed hiatus last year, they’ve quietly strung together three singles of rare elegance. ‘To The End’, ‘Darkest Place’ and now ‘Her Ghost’ unfurl their grizzled melancholy in slow motion - teasing your intrigue with oblique lyrics and celestial guitar licks. You’d expect nothing less of band who first formed in 2010 and are now, finally, limbering up to the release of their debut album.

For the unconverted amongst you, ‘Her Ghost’ is a worthy introduction. It rummages once more through the wreckage of former trauma, lingering with unerring clarity on the moments most of us would rather leave be. This time however, the maudlin angst is accompanied by something new: a slinking groove. Having toyed with silence for so long, Woman’s Hour are now waltzing their way through heartbreak.

“I’ve got nothing to say to her ghost,” simpers singer Fiona Burgess. “Hoping she’ll fade away.”

Not the words you’d expect from a standard dancefloor filler, but this isn’t your usual indie outfit we’re talking about. Why teeter on the edge of tragedy, when when you can stare over the precipice while performing a solemn jig? It’s this sort of thinking that’s drawn praise from a legion of like-minded admirers, not least the similarly erudite Wild Beasts in interview with DiS last week.

With the release of ‘Her Ghost’, you can expect this number to swell. Slowly and deliberately, Woman’s Hour have transformed into a band worth caring about. Tell your friends if you have to. They won’t be ours alone for much longer.

How did you end up writing ‘Her Ghost’?

We wrote ‘Her Ghost’ along with ‘I Need You’, which is the B-side, in about two days in a studio. We’d just started working with the producer Tom Morris, who is now producing our record. So we’ve had this song for about a year and a half now and just haven’t released it.

It’s great when everything comes together like that. We read this week that Dolly Parton wrote 'Jolene' and 'I Will Always Love You' in the same day, which is incredible.

Really? That doesn’t surprise me though. Sometimes you can almost overthink a song and look into every single aspect and make all these changes, and it not quite feel right. But then there are these songs, and ‘Her Ghost’ was definitely one of them where it just clicked straight away. It was like, ‘Done’.

You can’t predict that and you can’t plan for it. It often happens in the most spontaneous moments.

Can you explain what ‘Her Ghost’ is about?

My kind of way of approaching music is to try and avoid an over-explanation of a song’s meaning. I really enjoy allowing listeners to make up their own meaning for a song - it’s a lot more enjoyable for me to understand about how people connect to our music. I don’t do that to be overly provocative or anything. I fall in love with a song because it has a meaning to me.

Generally speaking, a lot of Woman’s Hour songs are set in the aftermath of a big event. What appeals about that lyrical setting?

I suppose I write on the go a lot of the time and often when you’re writing, although in the present tense, you often write as a reflection on something. I’m interested in memory and how memories change over time, so even after a big event your memory of that event obscures and develops. Often I might write about things that aren’t present at all and are very much aren’t in the past, but I might write about how it feels in the present.

I’m constantly baffled by different thoughts that spring up in my mind, and I find myself writing them down. ‘Okay. Why did this come about?’

You grew up in Kendal with your brother, William. Do you think that slower pace of life has seeped into your music?

I think it’s probably something that’s fairly subconscious. It’s not something that’s really obvious to me, because I suppose all our narratives and our histories are so embedded in us that it’s often hard to be objective in that way.

As a family we were constantly surrounded by the hills, walking and taking time over things. It wasn’t a rushed pace of life at all, you never felt suffocated by the city. So I guess space is something that we are drawn to.

What was the last book you read?

I’ve just picked up a couple of books by an American author called John Fante. I was given this book called 1933 Was A Bad Year, it’s brilliant and I read it in a couple of days. It’s a very short book, and I was really craving to read something. I finished my masters [in Performance Studies] not long ago, and I was stuck in very theoretical reading - I hadn’t given much time to novels. I’m now on the third book of John Fante, the second was Ask The Dust and I’m now onto Wait Until Spring, Bandini.

What appeals about his writing?

Apparently the characters he writes are like his alter-ego. They’re very complex characters who you half love and half hate - they see themselves in a very romantic way but they always feel as though they’re misunderstood by the world. We all have these thoughts that we’d never share, you get to see the inner spirit of the person but in a very ugly way.

Some of the phrases he uses are just genius. I’ve been writing down some of them. There’s this one from Wait Until Spring, Bandini where it’s a man talking about his wife, and there’s this phrase: “She had eyes that never saw his soul.” He [Fante] is someone who has really inspired me in the last month.

It’s all pretty much done. We’re quite confident that we have something that’s almost finished there. We’re on a little break with some tour dates and then we’re going to go back into the studio. It’s definitely coming out this year.

You’ve been a singles band so far, with three released since you bunkered down to write new songs. What’s the importance of releasing a proper seven-inch record with a B-side?

We were asked a while back about doing an EP and we all felt strongly about not doing that. I honestly think it’s because in our minds that we’ve been working towards a record. We thought of an EP as the aftermath of a record, rather than something that comes before. It felt more natural for us to put out singles that we felt were really strong rather than something that would be forced together.

You took a break as a band after releasing the ‘Jenni’ / ‘Human’ single. How has that affected what you do now?

It’s been a fascinating journey really. I’d never sung before. My brother had barely heard me sing, he was quite intrigued to hear me. From there we all gradually joined this band and we all had these totally different influences. Basically, we were just jamming out and we never expected to release those two songs.

When Ian and Sacha from Dirty Bingo approached us to release those two songs we were literally gobsmacked because it was just a hobby. We would get together, we rehearsed in this old church and we were just getting to know each other musically. The way I see that release was that it was really important for us because it felt like we rehearsing on stage. We made a lot of mistakes and we learnt a lot from them so I’m glad we made those early on rather than further down the line.

Here to caress your senses in a thoroughly roguish manner, ‘Sweet Spot’ is the latest offering from Wild Beasts’ forthcoming Present Tense. A thing of lilting beauty, it sways in between electronic squiggles and trembling tremolo with enough nuance to suggest these Kendal-born boys might not be banging on about sex again. Chances are they have dedicated another song to the boundless joys of nookie but, with a proposition this delectable, we don’t care either way.

Do I Wanna Know? (Triple J)

‘Hurt’, ‘Hallelujah’ and ‘The Man Who Sold the World’ - all great cover versions, but why? They’re relentlessly miserable, of course.

Bearing this irrefutable truth in mind, Chvrches have dismantled the cocksure coo of Arctic Monkeys’ ‘Do I Wanna Know?’ and replaced it with an ocean of unrequited longing. Synths and stabbing drum beats gush in awkward discord, leaving Lauren Mayberry to wallow in a restless state of romantic indecision. If this is what second album blues sound like, consider us sold.

Until Sex Bob-omb leap out of the pages of Scott Pilgrim and gamely tour the UK’s toilet venues, there will forever be time in our life for bands like Playlounge. The kind of groups to whom ownership of a distortion pedal is not optional and a recording budget is something you spend on Tesco Value whisky. Basically, ‘Zero’ is sloppy and great and loud - mostly loud.

If you thought Yeezus was at its best when marrying graphic sexual bravado with intentionally grating production, then boy do we have a treat for you. Also, you're an idiot.

Kanye's 'Drunk In Love' remix is a thunderously lame affair that sandwiches Bey's first lust flutterings between two outstandingly awful verses. “You reversed that cowgirl. You reversed, you reversed and I impregnated your mouth girl,” spits Ye with all the vigour of a man who is intent on inducing our gag reflex. As if Jay Z’s incessant allusions to domestic violence weren’t grim enough already.