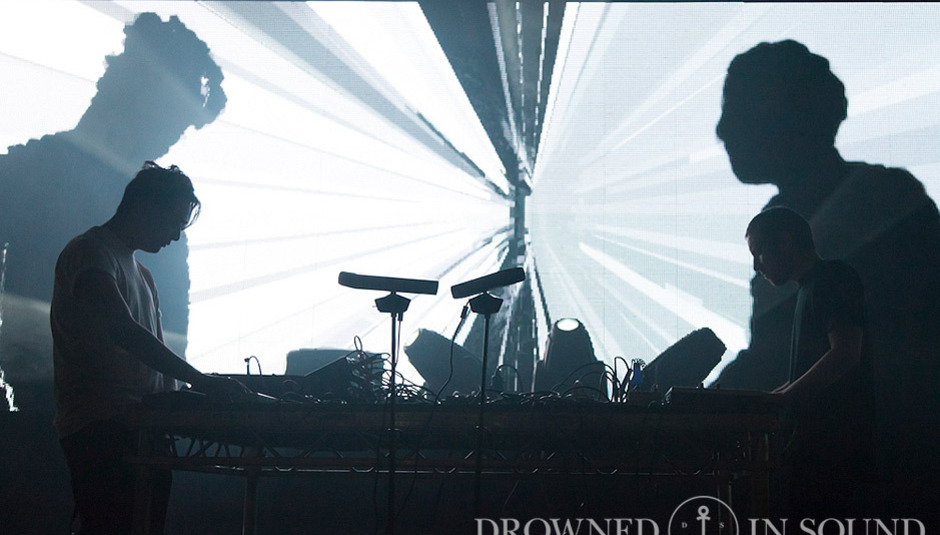 It’s been a rocky few years for ATP since its 2008-ish pomp, but while Barry Hogan has probably now cancelled more festivals than some of us will ever attend, one fiefdom of his empire has gone from strength to strength.

Long time ATP Recordings signatories Fuck Buttons must surely be able to lay claim to the title of ‘world's-most-popular-band-with-a-swear-in-the-name’. Well, actually they’re conceivably less popular than Fucked Up, globally speaking. Nonetheless, they've done jolly well. After a richly-deserved but somewhat unlikely rise - facilitated by the improbably plug of the Olympic opening ceremony and the fact we as a nation are now so depraved that the name apparently offended nobody – here Andy Hung and Benjamin John Power are, at the 2,100 capacity Kentish Town Forum, and by jove they’ve almost sold it out!

They’ve also brought some friends. First up is Axel Willner in his guise as The Field.At the commencement of the set I am reasonably certain that there has been a massive fuck up, with the gorgeous swirls and glittering drifts of delicate synth that make up the hypnotic body of his sound viciously stomped on by a truly callous bottom end. After a while it occurs to me that all the skinny young men around me are twitching, dancily… a while longer still and it starts to click into place for me too: he’s desecrating his own lovely music somewhat, but you can sure as hell boogie to it.

I’m still not totally certain whether the monster bass was in accordance with Willner’s wishes or simply as set up for the next act, but The Bug snaffle up the bottom end like a dog meeting another dog. I guess it’s kiiind of a favour to Fuck Buttons for Kevin Martin to deign to support them, and he and his trio of MCs wander on like headliners in a howl of klaxons, a roar of distortion, a fug of dry ice. The bass is so deafening it often feels more like an exotic form of head massage than a gig: I was so shellshocked can’t really remember if we just stare in shock and awe or attempt to dance, but I dimly recall a seismic ‘Skeng’ coaxing the room into sweetly enthusiastic indie kid life.

Finally, Fuck Buttons. To all intents and purposes, it’s the same deal as it was six years ago: two blokes manning some decks of electronics, facing each other and turned away from us. On the downside, the relatively enthusiastic way in which they bash said decks of electronics ought to be less immediately apparent in this large space that through the pubs of yore, while the slow disappearance of the silly toy instruments from Fuck Buttons' arsenal has perhaps made them mildly less flamboyant as performers.

But two factors see them through. One, some sort of nifty device projects giant, real-time silhouettes of the duo onto the screens behind the band: why learn rock star moves or, um, any stage banter whatsoever when there are GIANT PSYCHEDELIC VERSIONS OF YOU towering over the room? And two, that bass again: this time out Hung and Power are peddling a denser, weightier, darker sound that fills the room and binds the divergent aesthetics of their three albums with implacable assurance and juggernaut power. A Slow Focus-heavy first half – including a terrifying mutant ‘Colours Move’ – gives way to a Tarot Sport-y second and a final, blissful ‘Sweet Love for Planet Earth’, but rather than the slight disjointedness I could feel at the final ATP festival, it’s all permeated by Slow Focus’s heaviousity, It feels more like a solemn statement of intent than a lap of victory, and I miss the joy of the Fuck Buttons gigs of old, but it’s gratifying nonetheless to see them smashing forward into the future by sheer, brute force.

"My favourite thing in music is to ju...