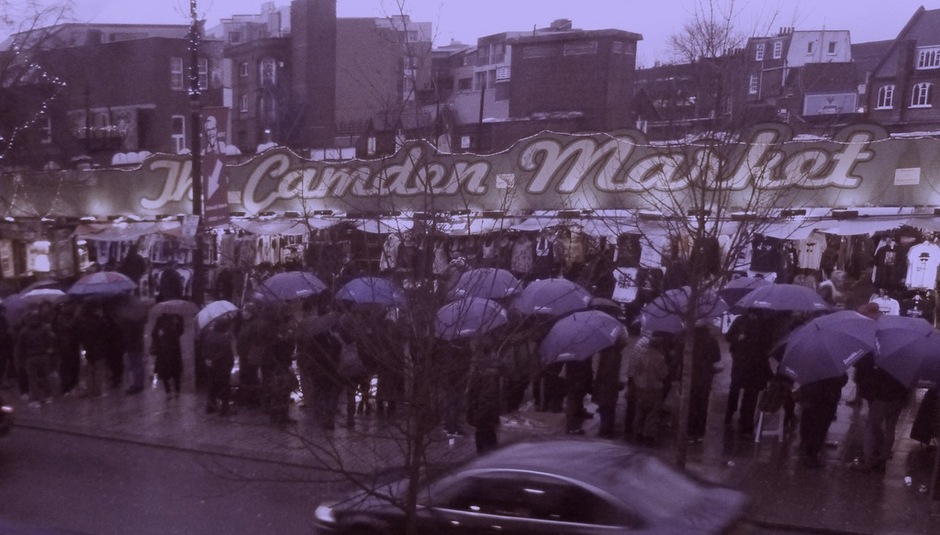 I Would Queue 4 U! - A Prince Fan's Patient Wait (In the Not-So Purple Rain)

I Would Queue 4 U! - A Prince Fan's Patient Wait (In the Not-So Purple Rain)

In the morning, I push my cup towards my brother, and say the word 'Prince'. He understands, and brings me back a cup of hot coffee. That is our agreement now, that if my cup is empty, and I utter the word 'Prince', he will refill my beverage at the earliest given opportunity. This agreement stands until I need an organ replacing; only then, after the probable liver transplant is successful, will our arrangement dissolve.

This is but one of the rewards to be gained from standing in a queue for seven hours, and holding a spot for someone else. But there are drawbacks too. Let me speak of them.

While travelling up to Camden at midday, my mind runs through possibilities. The word is out that ticket sales start at 2, while the timer ends at 5. That will throw people off. Latecomers will be disappointed. The tube isn't running particularly well today. That's a bonus, as it will make travel for those from the East and West more difficult. And the weather is dismal, as bleak and as slate grey as one could hope for. The many who looked out of the window and thought 'Shall I give it a go?' this morning, unless committed, will have baulked. Then thoughts come to mind of people who don't really care about the notion of waiting in line. And hordes of them, savage and baying in groups of twenty or more, barge their way to the front.

But at least when I get to the Electric Ballroom, like some beautiful dream, there is no queue. Until I look 90 degrees to my left to see one that runs two hundred yards, and around the corner beyond my line of sight. Around the corner, the wait begins, and the road behind me begins to populate, two by two. For the first time people start to round the turn to see something without end, and their faces drop. Some swear, many laugh. For the first time, someone asks me what the queue is for, and I tell them Prince. The second time someone asks, the answer is 3rdEyeGirl. The third time, it is Russ Abbott. It begins to rain lightly, and continues to do so intermittently for a few hours.

The couple in front of me are a mother and daughter from Highbury. The daughter is an actress, who has just done a TV commercial for something I forget instantly. She has an expressive face, and is immediately likeable. Her mother saw Prince at Wembley in the early 90's, and remembers the beautiful dancer Mayte. She doesn't know about the album of children's songs that was scrapped when the child she and Prince had together died. My mentioning this is probably a bit of a bummer, and I wish I'd kept my mouth shut.

The couple behind me fall away when security say that tickets will go on sale at 7, not 2. An hour or so later, it is announced that tickets are going to be £10, and one per person. At this point, half two in the afternoon, the numbers fall away; over a hundred people walk instantaneously. There is no greasy profit to be made here, no £300 "spare ticket" to 'reluctantly' sell on. The handful of touts circulating for extras have already left. As the numbers drop, we move forward, and can now see the venue, which is heartening. This is the position we hold for the next five hours. Halfway through that time, there is a break for coffee, food, and extra socks for my numb feet. While changing into these socks in a nearby sportswear retailer, I feel like the classiest man alive. But needs must.

There are at least five hundred people in front of us. The people behind me have become fixtures and introduced themselves. One is a man who has seen Prince at least 50 times. He's lost count of the exact number, and he has a Dutch / Irish accent. Towards the end, before the last half hour, I ask him if it will be worth it. "If we get in, and if he shows up, it will be worth it". To break up the time, people talk. About the poor CGI in the second Hobbit film. Steely Dan, The Verve, and somehow, Gay Dad are appraised. A BBC journalist interviews a girl wearing a brightly coloured outfit, topped off with an extremely impressive pom-pom style hat. He asks her questions, generic Prince questions that make the assemblage moan. A canny marketing ploy has already been enacted at this point, as an online gambling site has handed out purple umbrellas hoping for a little bit of placement. And all the while the leather jacket stall in front of the Ballroom plays hokey Cuban music; at points people dance in time to keep their circulation going.

Towards the end of the wait, as night falls, my brother arrives. Across the street is a crowd of onlookers that grows and grows, and the primal paranoia which tells you that other people are there to take what is yours builds accordingly. There are two side queues developing behind us, as well as the throng across the road. A boy with a baseball cap and guitar is poised to my far right hand side. To my left, on the near side, some chatter from people rallying against the idea of queue-jumping, while waiting for the queue to shift to the left, to the side of the building. This makes them part of the queue when this inevitably happens, and was a very good tactic. The barriers are brought to the front of the venue, and this triggers a panicked run from those nearby. There is a rush, push, some hustle and bustle. And everyone is squeezing together very tightly. Within the sardines there is a sense that this could have been avoided with better planning. The queue behind us is cut off, and things sound as though they could be getting pretty spicy for a second or two. The boy with the guitar and cap is ahead of us, and I wish for some very painful things to happen to him. By the time the bodies are channelled into the venue, it is well past 8pm.

As for the gig itself, 3rdEyeGirl were worth the wait. The new stuff is as good as you hoped it could be, but doesn't exceed expectations. Prince himself predictably remains the ultimate rock showman; tonight is probably the only time that I will ever see someone moonwalk while playing the guitar. Sound is a little choppy early on, but there are no hissy fits. The lighting is good, but the three oversized fake flames on stage leave the impression someone nipped down to Maplin at lunch and asked for The Big Stuff. The setlist is very strong. 'Something in the water (Does not compute)' is magnificent, as is the version of 'Guitar'. There is a real encore and a fake encore before the crowd is hustled out for the second set, to make room to let the second crowd in. And even though it felt like short gig, and the second set was perhaps the longer and more interesting of the two, there isn't a niggle to be had. Some of the people behind us would have waited patiently for nine hours to get in.

Prince is playing a series of shows at "iconic London venues". Follow the Prince London Thread on our music forum for the latest news.

In Photos: Polica @ The Ritz, Manchester