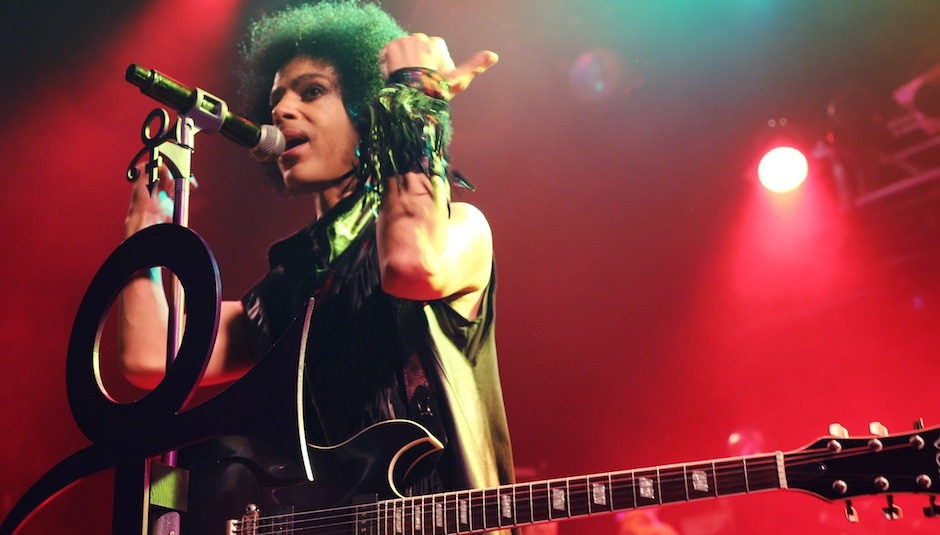 "Pretzelbodylogic it's so much fun, dreaming of each other on each other's tongue…” and so the foreplay begins for the second time tonight. I’ve already witnessed the dream-come-true greatest gig of my life^ (also known as the first set). Following several lights on but we won’t go, light’s out, shriek and shout encores; here I am, in the third row, petrified that from this close I might realise that Prince is a human being. From spitting distance, seeing him inhaling oxygen like the rest of us, I'm tempted to run away because he might destroy the illusion. Three chords in and my sinking heart steadies itself. It seems tonight's second show will be another wag of the guitar-shaped wand to strengthen that sexxy spell he has had the world air-humping beneath since the hazy eighties.

Prince is in the eye of a storm. It's a controlled purple-plume of chaos of his own making. From his position, he can see everything clearly. It’s not so much a Matrix vision, he just understands some fundamentals that are the building blocks of civilisation. Every little thing he does has the same symphonic logic behind it. But I’ll get to that. Firstly, let’s get this out of the way, PRINCE PLAYED 'PURPLE RAIN'. The gushing, glorious, words-can’t-ever-do-it-justice sex-hymn was every bit as breath-taking to hear as the WTF-concept of being here, in this 1000-capacity room, watching a grandmaster at work.

During the course of this evening’s double show - which began at 8pm and finished with a Prince DJ-set megamix of his hits a few minutes shy of the 1am curfew - we’re treated to more than the song from that soundtrack for that movie that woke up the mainstream world to the Purple One. Tonight was about so much more than The Hits - even the man himself jokes that he has a few of those ("Do you know how many hits I got?” he inquires, skipping from 'I Would Die 4 U’ into 'Pop Life’).

There are gospel calls and responses during 'Something in the Water (Does Not Compute)’ that could make the most hardened Beefeater dance and sing the refrain right back. There are covers of Tommy James and the Shondells 'Crimson & Clover’, ‘Stratus’ by Billy Cobham and a bombastic blast of Wild Cherry's 'Play That Funky Music’. There are numerous tracks from his back catalogue and quite a few from lotusflow3r. Unsurprisingly, there are several brand new tunes previewed, including the forthcoming album’s instrumental title track PLECTRUMELECTRUM, which has a riff that Jimmy Page or Tom Morello would proudly put their name to. This new town-slaying beast is the work of Donna Grantis from Prince’s new all-girl trio 3rdEyeGirl. Grantis originally released the track on a record called Suites and although it’s hasn’t been hugely overhauled, live it has the feeling of Rage Against the Machine in soft-focus.

All of the new material is incredible and sounds as rich and magical as any of the many life-punctuating tracks that led us here (although, looking around, a few of us in attendance were most probably conceived in the post Purple Rain baby boom too). At the cross-roads where Prince’s sleepy-funkgasm and 3rdEyeGirl’s otherworldly Barbarella vs Attack of the 50ft Woman "vibes" meet, a jam-cacophany happens, and there are a few hints that with the new record they're headed into a whirl of space-jazz, in a galaxy not too far from DiS-favourites Battles and Holy F**k. At times, the ladies almost (almost!) manage to play Prince off the stage, such is their virtuosity. This new creative relationship seems to be paying dividends for everyone, as every second of tonight’s set erupts and implodes perfectly - it's so great, it's hard not to begin imagining Prince as a dictator of a small country of musicians and the team releasing his record, like a more iconic Castro presiding over Babylon.

Seeing him from this position, singing, strutting, moving like a Samurai through a corn field, breathing (just like the rest of us!) but never sweating (not even a single bead! And he has no diva towels or water. And he’s wearing a coat and comes back onstage with more layers… he is 55 years old, but you wouldn’t know it), it’s impossible not to notice that every ounce of joy is reciprocated. Up close, you notice the little smirks and coy turns of the head as the opening chords of songs elate those who’ve come to commune with a living legend. He repeatedly asks for the house lights to be flicked up so he can see the sea of faces. For all his supernatural success, it’s clear Prince has never forgotten the magic of being a fan. These shows, much like his special living room gatherings and after-parties, and every stadium show, and every extended day in the studio perfecting his next masterpiece, are a reminder to him and to us, about the power of music. However, the reason tonight is such a jealousy-inducing magic moment is because Prince applies all of the structural ingredients that make his songs magic and his seemingly-playful lyrics poetic genius to every little thing that he does. Each experiment, each commercial and creative endeavour has this sense of teasing, of gasp-inducing foreplay that builds to a moment of history. It’s the mark of a true genius that not all of his endeavours are book-worthy cultural history. Tonight, tomorrow and every little thing he does is a infinite cluster of personal life-landmarks (or at least that's how this feels). Every verse, every teaser track, each fan-photo of a queue and every crescendo, it’s all the same. This week, when he’s not popping up on stage, The Internet (via age-old Modern Popular Delusions & The Madness of Crowds) is his instrument of choice, and he’s playing it just like the riff on ‘Alphabet St.’. And here I am, drifting into the tornado, in a state of utter elation, unwilling to consider that this double-gig will ever end.

Like musical notes on the page, these plans to kick the media hornet's nest and start the buzz for his latest album must have seemed like a formula for strong communication in the Information Age rather than a recipe for so much fun. He simply pre-emptively dropped some clues. Added a dash of detail. Boiled off the precise information. Opened his soundcheck up to the masses at an hour's notice, let them gawp and let them tell the world via those assembled that he's doing it again tomorrow. This is tomorrow, and let me tell you, it was better than a string of superlative-laden sentences could ever do justice. I was too busy going hoarse to fill my notepad or twitter off some banal brag. The special announcement about putting down your smartphone and participating was a wonderful touch, and push against the banality of the modern world.

Then the house lights came on, for the fifth time, for real this time, and bouncers begin asking the giddy, spellbound veering on post-coital mob to leave ...And now what? Everything could happen. Everything is possible. I mean, you can already picture the euphoria this summer at Wembley Stadium or The Olympic/Hyde Park and see the BBC's post-show Glastonbury goosebumpgasm, with Fearne Cotton left utterly speechless, jaw flapping floor-ward. The Revolution may be televised, but rest assured, no matter how close I got, how many times I saw him blink with his feet on a stage, the spell remains unbroken. The Purple One is not one of us, he is vapour, he may not be mortal. He is something we will never comprehend.

Setlist as a Spotify Playlist

Pretzelbodylogic
Let's Go Crazy
Funknroll
She's Always in My Hair
I Could Never Take the Place of Your Man
Guitar
Plectrum Electrum
FixUrLifeUp
Something in the Water (Does Not Compute)
Crimson & Clover
Cause and Effect
Dreamer
Play That Funky Music
The Max
Purple Rain
Pretzelbodylogic (Remix)
Stratus
When Doves Cry
Sign “☮” the Times
Hot Thing
Nasty Girl (instrumental)
Alphabet St. (instrumental)
Housequake
I Would Die 4 U
Pop Life instrumental
A Love Bizarre instrumental

^ = Excuse the humble-brag, but I didn’t make you click the link to read this.

"We had to be sure we wanted it again...