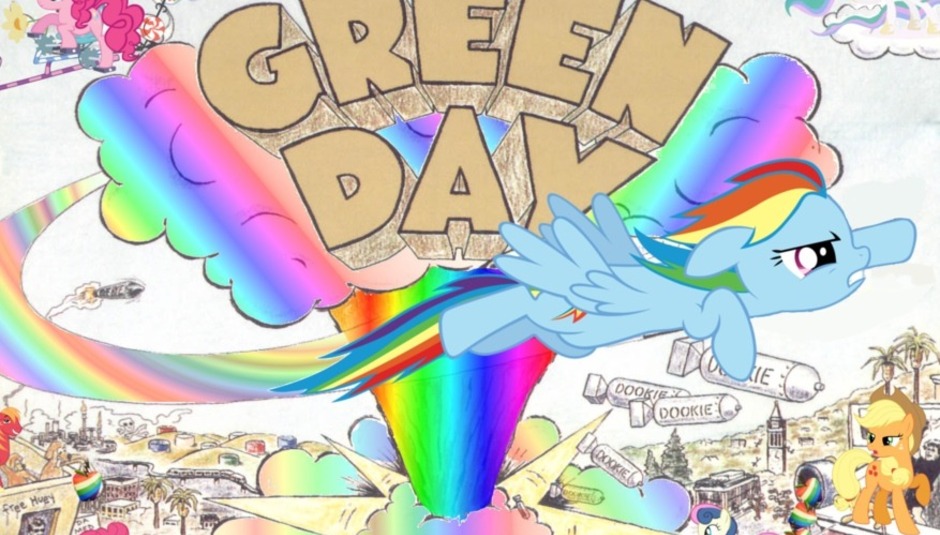 Sometimes, music websites ask up-and-coming musicians to comment on music. It's become quite a normal thing to do, as the nostalgia-bait means traffic and the anniversary-industry of re-promoting products means that editor's are offered easy hooks to hang coverage around. However, you can't always expect everyone to love everything, no matter how much of a sacred cow you might believe it to be. Kiran Leonard was going to send this back to a rival publication, instead his sent it to us, but we didn't dare ask him if we could call it an Open Letter....

Last week I received an invitation from you to write a couple of paragraphs on Green Day's seminal punk-pop record Dookie, which I understand approaches its 20th anniversary this year. Unfortunately, I hate that album, and it would take the darkest of magic to convince me otherwise. And whilst I appreciate that revisiting and reevaluating critics'-circle-approved Classic Records is important in trying to develop a deeper understanding of the influence a record has had in the years following its release, and also in introducing a new, younger audience to older records, you are doing nothing but irreparable, horrifying damage by giving this record MORE publicity. Have we not just recovered from the generation of insufferable shopping centre pseudo-punks that was spawned by this record? And how is it that I know every word to the chorus of 'Basket Case' without ever having listened to it all the way through?

Really you should write about what is indisputably the greatest record of 1994: the Gerogerigegege's Life Documents EP.

For those of you who aren't aware, the Gerogerigegege were a Japanese band that arose from the Tokyo gay S&M scene in the mid 80s, and for me Life Documents represents some of their finest work. Infectious house beats repeat incessantly, bongo strikes and handclaps topple over one another in a kinetic frenzy, and frontman Juntaro Yamanouchi howls and groans with the vigour of a stallion in the throes of ecstatic virility. According to the liner notes, it's just him on the record, though he was often known to collaborate with a 'Gero 56', who enjoyed using his cock as a vacuum cleaner extension: and on stage! The Gerogerigegege make Serge Gainsbourg look like Mary Whitehouse (point of reference: their debut record 'Showa', which is 40 minutes of fucking. No drum machines), and their aforementioned live spectacle was a more unique and interesting experience than Green Day's stadium-filling LEDs-and-fireworks travelling nausea theatre could ever hope to be.

Why do I think Life Documents is the best record of the 90s? For one thing, the beats are great, especially the second one (Juntaro's low moans on that B side really compliment the force of the jungle-esque rhythms). But you can't deny its raw expression either. Juntaro is Japanoise's Jean Genet; his work is a brutally honest and often deeply moving exploration of his fetishistic sexual desires. I'm not saying that you're going to ENJOY hearing a man in his mid-30s masturbate to an Aphex Twin Z-side; I'm just saying that Green Day probably haven't done anything this bare and brave in their entire careers. Juntaro trounces them in 7 minutes! [REDACTED], WHY are you writing about fucking Green Day???

Essentially, Dookie and Life Documents sit at opposite ends on two spectrums. Firstly, it can be commended to Green Day that Dookie, unlike their later efforts, is never self-indulgent, and very stripped down, whilst Juntaro is literally masturbating for the entirety of Life Documents. Secondly, Dookie is shit, and Life Documents is the greatest record ever made. It's just a shame that Juntaro's life was supposedly cut short (actually, we don't really know if he either killed himself, was admitted to a mental asylum, or just re-integrated himself into society and became a stockbroker; I recommend listening to their final record, the haunting 'Saturday Night Big Cock Salaryman', to draw your own conclusion).

And I can't believe this was recorded just four months after the release of Dookie, Green Day's seminal pop-punk extravaganza!

p.s here are some other great records from 1994 you should write about:

Kiran Leonard just turned 18, is from Oldham, and his debut (double) album Bowler Hat Soup is out now. He's playing 6 Music's festival next month, and his first ever headline show on 5th April at The Castle, Manchester and 11th April at The Waiting Room, London. This is his new single:

Live Report: From the third row of Pr...