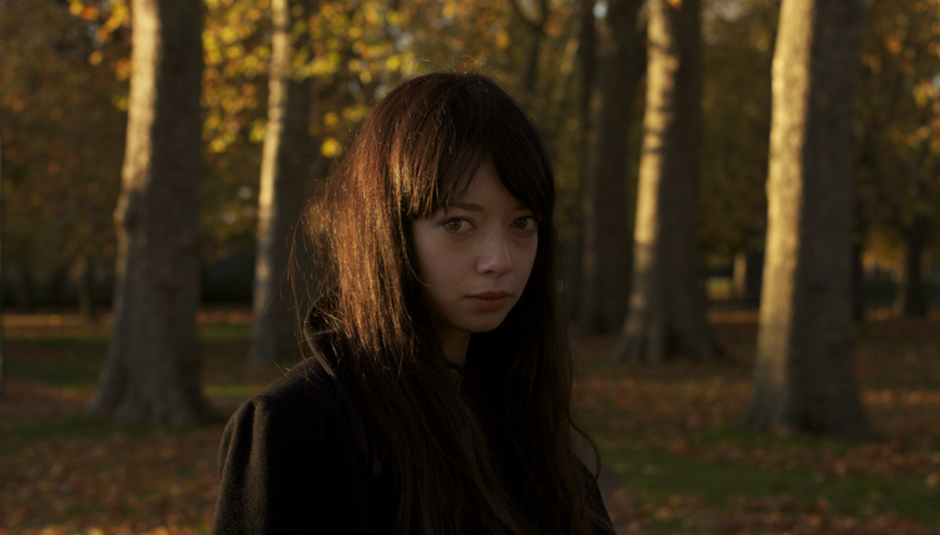 The singer sits wearing deep black shades on a moulded chair in a Toronto restaurant while polishing off a tray of sushi. Between apologies for talking through mouthfuls, the Nottingham native waxes lyrical about her decorated career as a cellist (notably for Stars of the Lid), and as singer-songwriter for Felix, the chamber-pop duo she’s since sidelined to play solo, under her own name.

Softly spoken, Lucinda Chua revs up and squeals as her observational cogs whir into life. With sushi-chomping enthusiasm, she reflects on an illustrious photography career (shooting Charlie Brooker, for one), international art exhibitions - most recently in Vermont - and the culinary woes of whistlestop touring. Owing to a fatal dictaphone mishap, however, Lucinda’s conversational nous is largely lost. After a year in limbo following the Stool Pigeon’s demise, the article instead strings together echoes of our encounter’s memory, and a recent update via Skype.

It’s true that the fleeting tales Lucinda fosters have always blossomed in their concealing the whole truth. Her lyrics, she says, document “very small moments that end” and it’s by ending so suddenly that they entrench in your subconscious, lounging around and outstretching limbs with no small entitlement. Take one perennial Felix character, the righteous boyfriend-basher, a welcome presence on the band’s 2012 LP Oh Holy Molar: “Whenever you get drunk/You tell us all how you are the wittiest one/And the cleverest one/It’s no fun,” she jibes on ‘Hate Song’, a toyingly vitriolic cut.

The album is altogether gnarlier than its predecessor, You Are the One I Pick. That record was intimate, elegantly curious and dense as woods, developing in dark rooms the demoes that comprised Lucinda’s Nottingham Trent free elective project in alternative sound techniques. (Lucinda has twice returned to her university on photography business - now as lecturer.) Despite scoring only one mark above the course’s pass rate - too in thrall to her classical cello training, said the red ink - You Are the One I Pick’s demoes attracted Stateside label Kranky, best known for its experimental and ambient roster. The imprint released both the final studio recording - a bitingly sinister set couched in Chris Summerlin’s guitar doodles - and its poppier follow-up, Oh Holy Molar. This well-balanced compositional sensibility aligns to the lady we encountered last year in Toronto, chatty and sharp enjoying a Yann Tiersen support slot across North America.

Indeed, unlike the wry waspish figure imagined peering from the debut’s curtains, Lucinda admits that she’s become opportunistic and self-assured in musical matters. Her forthcoming solo debut, Music for One finds her revitalised after abandoning a covers record (some of which remains here). “It was a really good process, especially vocally,” she says of the ditched LP. “I was deconstructing everything, inspecting elements and putting it all back together. So then I went back to Oh Holy Molar and covered some of my own songs. It was interesting, because you commit these songs to record but it’s a shame to stop them from growing. And out of that process, of just over a year, I conceived a new style, a new way of arranging music, and came up with some new songs.”

Which brings us to date. Coincidentally, a year before Lucinda’s forthcoming Slint support slots - in aid of which this article exists - she breathily recalled meeting Dave Pajo in Philadelphia, where he’d been caught enjoying their show. She concluded of the episode: “It’s really difficult not to do a little dance.”

Lucinda Chua: Yeah, I’m sure we will make another Felix record. You have to understand that the only music I have ever written has been for Felix. As I was developing a musical voice, that was Felix. And so I got to a point where I just wanted to do something for myself. It’s more allowing myself space to try something new, to test and develop myself, and to come back with more clarity.

You seemed touchy about the suggestion that your lyrics about, say, pretty boys who “are so Vice magazine” are aimed at specific people. Why is that?

Everything is wrapped up so tightly in riddles that it's really amusing when people try to de-code them. I don’t think I set out to write a song that tackles this or that issue. It’s all different moments, there’s no one person - I’d hate people to think I have this massive chip on my shoulder. It surprises me that a lot of the reviews have focussed on the lyrics rather than the music.

Because you come from a classical background?

Quite. Ever get attached to your characters?

I don’t really become attached to characters because it’s always changing. It’s about a feeling. [Quoting a lyric from ‘Sunday Night’] “You said you lost your shoes in a fight/There was no fight/But it’d make a good story, right?” It’s just that sentiment that you see in people. Also, I am quite flippant in the songs. Something that carries some weight, I might brush off; or I might make a gesture into a whole song.

Your music involves narrative and observational aspects, but presumably you’re often busy with photography and music. Are you constantly keeping eyes peeled for material?

If you’re open and receptive, you’ll pick up a lot. Everyone soaks it in, it’s just about distilling which parts interest you. The information you take in is boring, but it’s about how you mull it over, or the connections you make. I guess I’m very analytical. I can hear something, I’ll play it over and over in my mind and make up backstories, and it’s how you then present it that potentially makes it interesting.

On the point of putting earphones in, I think that’s really interesting: culturally, we’ve shifted from listening to music in the room, to listening in our own sphere. And that was partly the thought process behind putting this new record together - that’s the idea behind “Music for One”. It’s music for you, in your bubble, with your headphones. For me that’s a really interesting development to the way we engage with music. A lot of my music listening happens on public transport, and it’s about providing me with a soundtrack that takes me from A to B, and how that soundtrack bleeds in with all the ambient noise from everything around me to create a new soundtrack. That specific listening experience is something I’m hoping to explore with this solo record.

Lucinda would like to apprise you of her online presence: try lucindachua.com or twitter.com/LucindaChua.