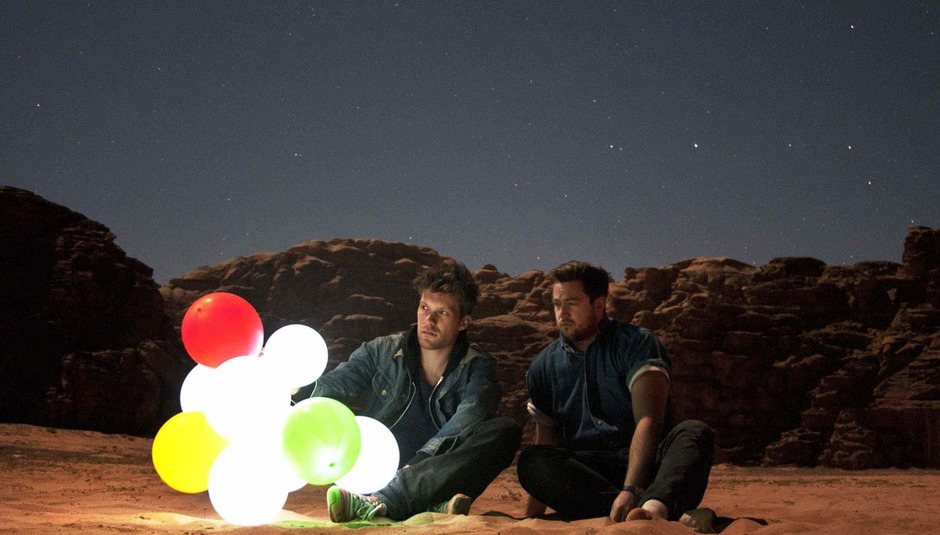 DiS doesn't 'tip' many acts these days, but every so often a new band comes along who blow are minds with their particular brand of radiofriendlyunitshifters. THUMPERS make gloriously fizzy party-pop - think early Bloc Party, but with a big grin, glitter and clown-shoes for drum sticks. Actually, try imagining Flaming Lips starting out in a basement, but as a duo formed by two best friends and you're half-way there.

We're not the only ones who are impressed by their early releases as those fine folks of discerning taste at Sub Pop have snapped them up. We've known the band in their previous guises, and thought it high time to catch up with them before they become too big to chat with the likes of us. You can catch them for free at this weekend's GetWinterized party that Converse are throwing. Simply click here to register for tickets.

DiS: Hello chaps! How are you, where are you and what are you doing today (other than replying to questionnaires)?

John Hamson Jr.: Hey, we're good! Today I'm back in Warwickshire (where we both grew up) to go through old photos for a video we're making, as well as finishing album artwork and other bits. I can only assume Marcus is in London writing songs and getting up to no good.

You recently signed to Sub Pop, what tracks would go on side A of your ultimate Sub Pop mixtape?

What rarities and lesser known tracks would you throw on the b-side?

Oh twist... I stumbled onto this sub pop band Arlo when I first went to America as a teenager, rooting through record stores, and their first record (which sounded like Weezer's lost blue album) soundtracked an entire summer of bounding around with friends, proudly putting it on at every party I went to. So side b would have to open with the first track on that album:

Last time we met was back in February. You had just put out a single and we were watching Blood Red Shoes tear up Shepherd's Bush Empire together. The past few months must have been quite a whirlwind for you. What have been your highlights of 2013?

Ah yeah, that was great to see them triumph at that venue, especially after knowing them for so long and seeing them start out. It's been a really great year for us. Highlights I think have been signing to sub pop which was a childhood dream realised, getting to finish our record with one of our favourite producers and getting to play a load of shows and festivals. One of the big things though was seeing how audiences have reacted to us... we aim to create an uplifting and celebratory atmosphere at our shows, and seeing that begin to happen in the way we had imagined was really something.

Urban Dictionary suggests several different definitions of what a Thumper is. Are you named after bible thumpers, a drinking game, the rabbit with the big butt from Bambi, or the above or something else?

Hahaha yeah good ol' urban dictionary! The name references the heavy drums/rhythm/percussive element of our music, but the word itself has got these associations with the heart as well which are just as useful as references for us I think. We aim to be fullblooded - in terms of lyrics, sonics, every which way - so that works for us.

This isn't your first rodeo. What do you think you've learnt from your past lives in bands and the extra circular activities in Friendly Fires and Noah & The Whale?

Well, where to begin... It's no secret that any band these days has to deal with a lot of stuff that has absolutely nothing to do with the creation and playing of music, and in the case of the band Marcus and I were in previously (and what we went through), all that bad stuff totally derailed any enjoyment of it by the end.. It ruined it. So we had to go away for quite a long while and recharge and figure out separately why we wanted to do this again. So for me, having the opportunity to play with other bands no strings attached was the best way to rediscover the best bits of music. My time with Friendly Fires in particular was a great way to see how a band at that level put together a live show, as well as giving me the confidence to record everything ourselves (Ed Mac produced a lot of their first record with just one microphone) and really explore the studio as a songwriting tool. I learnt quite a bit from my Noah and the Whale experience too (I got fired from them), but that's a story for next time..!

We've learned to trust our instincts way more now (which we definitely learned from making biiiiiig mistakes in our old bands) and that's across the board - from the people we choose to work with to the way we make music. We're much more open now to embracing the imperfections that happen during recording, for example, in a way that we couldn't have let ourselves be before. But that's the great thing about letting recording overlap with the writing process, those spontaneous moments that come from experimenting with a new song get immortalised before you know whether they're good or not.

You must have met some interesting and inspiring people over the years. Is there one lesson or insight you've taken on board that has helped keep you focused and remember what's important?

I think there's a kind of cynicism that can creep into your mindset when you've been in a band for a long time. It's an escape route in a way, the easiest thought pattern available when things aren't going well or whatever. Totally understandable, I guess but it's also uncreative and totally self-defeating. And then sometimes you meet people, especial;y stalwarts of a scene, who are so clear-eyed in spite of all the shit that you know they've been through (because everyone has) that their outlook astounds you. Makes you ashamed at the time but it's hugely inspiring too.

We were in our first teenage rock band and already pretty misdirected when we somehow met John Peel, and he seemed like just such a real person. Focused on all the best that music has to offer. Unbelievably we played two sessions for him. We were in total awe, floating the whole time... His death really affected me and he's someone i still think about a lot. Then meeting Andy Ross who briefly managed our old band right at the end was pretty great. He was someone who had seen it ALL with blur, and was great to just sit for hours on end talking about that time.. it was proper "go on Andy! tell us a story about Graham! please Andy!" all night. legend.

You've been working on your debut album (we presume). What has the process been like, who have you been working with, what instruments will make up the sound palette (feel free to be nerdy with synth names and pedal chat) and what else can you tell us about it? Will Marcus' sisters be singing on it?

Yeah, we finished the record over summer with David Kosten who was always on our list to mix and do additional production. The sessions leading up to being involved with him were these massively intense 3 or 4 day stints recording back where we grew up between my touring commitments with FF. in hindsight, I guess we missed out on an opportunity there to go away and make a new world in a studio for a month or whatever in the more traditional way. Instead, though, I think we legitimately made going back in these stints as immersive as possible in different ways - by trying to involve our hometown environment as much as possible instead of denying where we were and also by, um, barely sleeping. So Marcus' sisters sang on the record, equipment we hadn't seen for years would make an appearance (hello, pointlessly enormous broken 4x12 Marshall cab) and we let being in the area push us to write lyrics about growing up there.

The main breakthrough for us in terms of sounds was how we recorded the drums and layer up all the percussion. There's a lot of triple or quadruple tracking entire drum kits with one mic or stacking up 3 different snares and mixing that with a little bit of programming too. The vocals as well were something we really pushed on and tried to hone a specific sound on.. Marcus's sisters sing on all the tracks as we wanted to reference all that close-harmony 90's r&b stuff. We also roped in Elizabeth and Jeremy from Summer Camp for one track as it really fit the narrative of song.

You're heading to London to play this big Converse shindig. What should people expect from the show and do you have any Arcade Fire-like suggestions for the crowds' attire?

Private scenes made public in piledriving heartswell motion. And trumpets! And I think everyone should dress up pretty damn warm.. you all know everyone is playing outside?!

What have been some of your favourite albums and songs this year?

Would you like free tickets to see THUMPERS, Lianne La Havas, SWIM DEEP, and Theme Park? All you need to do is register here to get yourself Winterized.

For more on THUMPERS visit thumpers.co.

DiScuss this on the Boards: DiSsers New Music Tips for 2014

“It’s really difficult not to do a li...