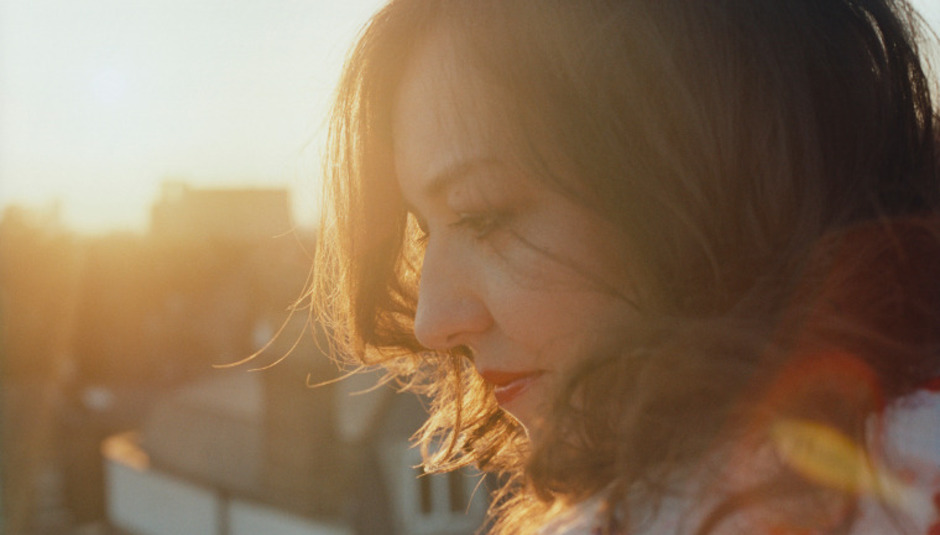 "I’m under foot and underground", Kathryn Williams sings in the opening track of her latest album, Crown Electric. This is pretty much how she’s been seen musically throughout her 15 year career, despite a Mercury nomination for 2000’s Little Black Numbers – someone who’s worked constantly, built up huge admiration from her fans and fellow musicians alike, but still a hidden gem in the ‘pop folk genre’ or whatever pigeon hole you want to put her in.

This could all be set to change with this latest release (out now on One Little Indian), her tenth to date. She even admits herself that it could be her ‘classic’ album. This isn’t a label the Liverpuddlian-born musician uses lightly though. Despite her wicked sense of humour and humble chat, which can warm the iciest of roomy venues, she’s always suffered with a feeling of inadequacy playing live...an uncomfortable feeling rather than nerves, almost like she doesn’t deserve the adoring audience in front of her.

What’s different this time is a confidence. Rave reviews aside, Kathryn likes these songs...

“I don’t think I’m the dog’s bollocks or anything, but these songs give me a confidence I haven’t had before. I’m proud of this record...and I’m often apologetic!’ she says.

“I think this could be my classic album. A lot of people will judge me with the Mercury one, but I think this is the best thing I’ve ever done. I feel proud in a relaxed way.

“I don’t feel I need to sing the shit out of it. Sometimes I have felt, in the past, that I’ve had to hype things up but, I think if someone gets to hear this one, they’ll like it.”

What’s not to like? Crown Electric, named after the trucking company Elvis worked for (and almost called 'The Joy of Life' after a Welsh B&B, before being told it sounded too much like the Joy of Sex) is quintessential Kathryn. It’s packed with beautiful, winding folk songs laced with humour, tales of life and love, and some brilliant musicianship.

Yet it does sound different from her previous albums...more complete somehow. This could be down to picking the cream of the crop from a bank of 60 songs, 30 of which were brought to the studio before being scrapped. But, a big part, she says, is down to the musicians who joined her on the record, stolen from friend and collaborator James Yorkston.

The Fife folkie is one of the musicians that joined Kathryn on the album for the understated and mesmerising 'Arwen'. His appearance is a favour paid back for her providing the vocals and inspiration on his I am a Cat from a Book’s ‘Kath with Rhodes’.

And there’s no escaping the excellent Ed Harcourt these days, who co-wrote 'Darkness Light', 'Sequins' and 'Morning Twilight'. He joins Kathryn for vocals on the latter, despite being ‘the most hungover man I have ever seen!’ at the recording. His input is clearly felt, bringing an almost euphoric tone to simple melodies...and maybe something a little darker or sinister than the rest.

These may be relatively new musical partnerships, but the friendships go back a decade or more, formed as part of a slightly incestuous group of musicians operating just below the singer-songwriter mainstream. They’re friendships that make it easier to ask for help, Kathryn admits.

“James supported me back in 2001 with the Athletes (his touring band) and we’ve been friends ever since. Ed I’ve known pretty much the same amount of time, along with people like Thea Gilmore and Eliza Carthy, and I just think is a genius. These are people who have almost grown up together.

“Then there are the musicians that played on James’ record. When I heard it, I thought ‘I want that’.

“I just asked them for help, from everything from promo to playing. I felt like such a twat, but we all help each other out. Being my tenth album, it had a make or break feel to it, so I wanted to get the best I possibly could. I wouldn’t adjust my creative side to reach the mainstream – it wouldn’t mean anything to me, apart from probably having better clothes!”

There’s also huge praise for cellist Ben Trigg, who she attributes the intricacies and groove too, and long-time producer Neill MacColl, the “engine” of the whole record.

It’s not just the album relying on the good nature of fellow artists. The music video for first single ‘Heart Shaped Stone’ grew out of a pleading tweet to writer and director James Serafinowicz, brother of Peter, who roped in colleagues of Charlie Brooker and Kevin Eldon. The end result is something that perfectly sums up Kathryn Williams – a love story, a beautiful song, a walk along a sandy beach, a hot man who tries to kill her with lasers coming out of his eyes!

“What I love about the video is that everyone’s going to think it’s the same old thing of a woman taking herself seriously, but then the man turns evil! It was that or a giant stone squishes me! People know I’m taking the piss out of myself,” she says, explaining that a bit of humour makes her creations a bit more “spikey”!

“I feel so thankful. A lot of my career has been people working for free or a lot less than they normally would do. It’s really humbling.

“I say I’ll pay them all back when I become number one in Australia.”

Crown Electric is out now on One Little Indian.