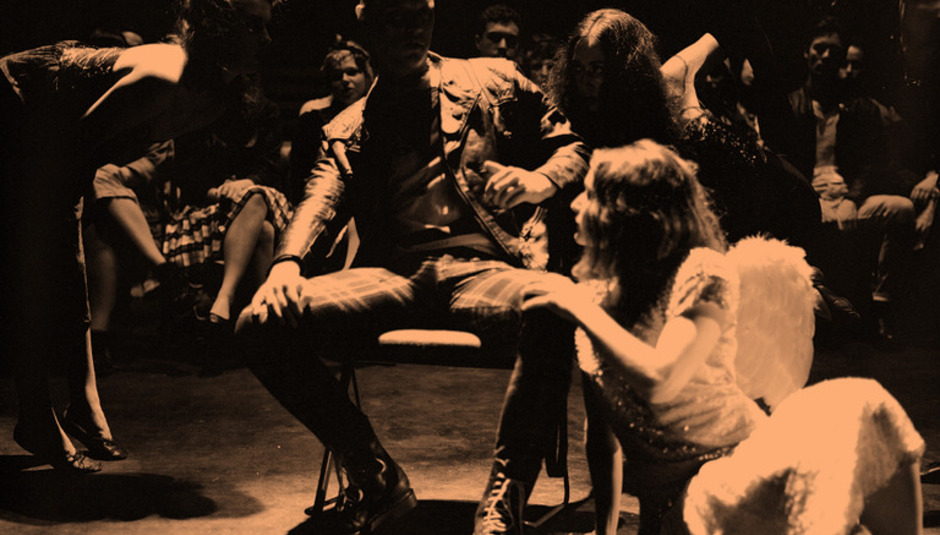 Belle and Sebastian: Frozen in the Moment

Belle and Sebastian: Frozen in the Moment

Our good friends in America who run the fantastic Under the Radar magazine caught up with Belle and Sebastian’s Stuart Murdoch for a chat about this summer's release of The Third Eye Centre - a collection of rarities, collectibles and non-LP tracks from the last decade.

This article originally appeared in the August/September 2013 print issue of Under the Radar - you can by back issues and pick up the digital editions over at undertheradarmag.com.

As a trainspotter who can wax rhapsodic over obscure B-sides from The Smiths and extol the virtues of Felt’s Goldmine Trash, Belle and Sebastian’s Stuart Murdoch is something of an aficionado of compilation albums. In 2005 his band released Push Barman to Open Old Wounds, a compilation of their early singles and EPs from their time with Jeepster Records. And it was recently announced that there’s a new compilation in the works, The Third Eye Centre, which culls B-sides from 2003’s Dear Catastrophe Waitress era on through 2010’s Belle and Sebastian Write About Love.

The music industry has undergone a sea change since Barman, allowing one to wonder what the point of such a compilation is when the songs are at everyone’s fingertips via streaming services and digital downloads. “Anyone can make compilations,” admits Murdoch. “But I think there’s merit in how the artist approaches it and guides you through the process. We take a great deal of pride in these, as much as we do with our proper LPs. The artwork’s very important, and the liner notes have bits written by each band member on individual tracks.”

And indeed, The Third Eye Centre is painstakingly crafted and immaculately sequenced, feeling nothing like a glib cash grab. It’s an artifact of a distinct part of Belle and Sebastian’s history, with B-sides from the Trevor Horn-produced heavy hitter Dear Catastrophe Waitress sessions co-existing snugly with the less ostentatious The Life Pursuit and Write About Love-era tracks.

“The dynamics are very interesting,” says Murdoch. “I think it’s as good as our first one [Barman].”

“Heaven in the Afternoon” is sung by Sarah Martin, and her cooing vocals fit the song’s winsome theme like a glove. “I wrote that song and I can’t quite remember why I asked her to sing it,” says Murdoch. “But it’s somewhat inspired by the Edie Sedgwick biography. She’d gone through such a bad mental state. The only stuff she could take in were baby stories like Winnie the Pooh. So I wrote that one for Edie and the condition she was in.”

And Murdoch admits that “Blue Eyes of a Millionaire” would’ve made the final cut for Write About Love if it “had more of a movement to it.” As it is, it’s a gorgeous stand-alone track. “It’s about a person I used to know in Glasgow,” he says. “Rich people can buy many things, but they can’t buy actual grace and beauty, which this girl had.”

Murdoch’s reluctant to discuss the Stevie Jackson-penned tracks on the album, often lamenting their omission from the proper LPs and illustrating just how eager he’s become over the years to fashion the band into a more egalitarian outfit. The compilation even includes instrumental numbers composed by Mick Cooke, including the flamenco-tinged “Passion Fruit,” which serves as something of a coda to the Jackson-penned spaghetti Western twang number “Stop, Look, and Listen.”

As the Glaswegian act gear up to record their ninth studio album, Murdoch’s clearly proud to take a long glimpse at the past, even when he and his band mates are caught in less than flattering moments. “If you look at photographs of yourself from 10 years ago, it might make you cringe because of your style or haircut,” he says. “But at the same time it’s fascinating because someone caught you on camera when you were young and fresh. It’s been a very exciting process for us to do this.”

This article first appeared in Under the Radar)'s August/September 2013 print issue. "I wanted to say goodbye to my parents"