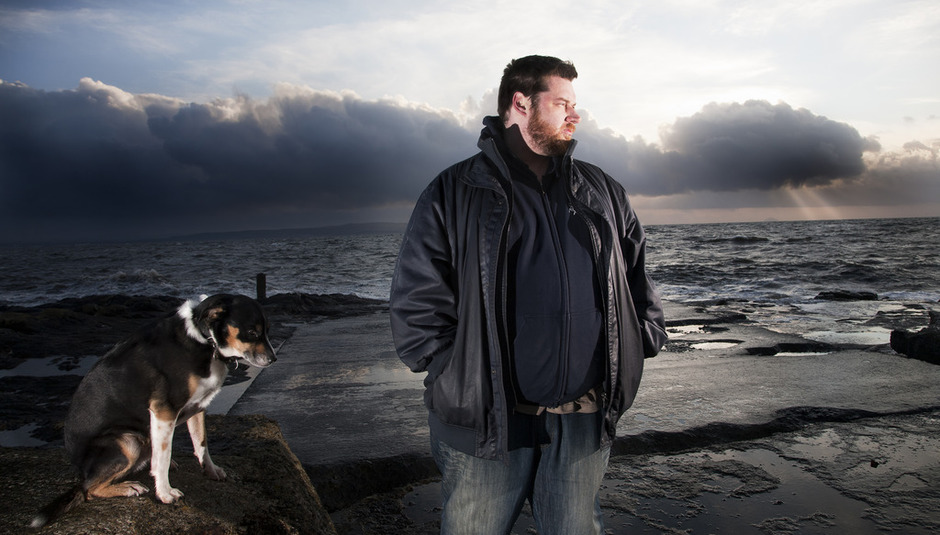 Music as medicine. Not an uncommon practice by any means, but almost always an all-consuming one. As purveyors, fans, consumers...we bury ourselves in it; finding solace in the woes and afflictions of others and tying those experiences in to our own in an attempt to learn, perhaps, or to simply take comfort in the fact that someone, somewhere is roughing it out, as we all are at some point.

But what does the artist get out of it? Most will talk about a desire to create, but sometimes - especially where weightier material is concerned - we hear of someones need to create, which is something else entirely. Writing songs in an attempt to shed skin or exorcise demons. However it's labeled, it results in deeply personal work that is laid out for us to make of it what we will.

Safe to say that, initially at least, RM Hubbert buried himself in creating and exploring his craft out of a need for escape. Without patronisingly trying to convey his own thoughts and feelings at the time, 'Hubby' started his solo musical journey during a particular difficult time of his life. However, looking back now, three years on from his debut solo LP First & Last, he says that the music he was making at that time was never directly about dealing with those events. "Strangely, until recently, the music itself wasn't really the source of catharsis, but it did provide me with an excuse to get on stage and talk to rooms full of strangers about the things going on in my life that I couldn't talk about otherwise."

This may go some way to explaining why that first record was completely instrumental; unlike it's 2012 follow-up Thirteen Lost & Found. "I had always intended to sing on the first album," he admits. "The main problem was that I couldn't find the words to adequately describe what was going on. It was written during a period wherein both of my parents died suddenly and I got a retroactive diagnosis for the chronic depression that I have had since my teens. The events were too close, I couldn't really think about was going on let alone write words to the effect."

Thirteen Lost & Found was a different beast entirely. A loose and relatively unplanned collaborative record made with old friends and acquaintances, it was Hubby's way of forcing himself back out in to the world and reigniting forgotten friendships. "The whole idea behind it was for the record to be an excuse for me to reconnect with a load of old friends that I had lost touch with. I didn't know what Thirteen Lost & Found was going to be until we finished it, to be honest. Featuring the likes of Aidan Moffat, Alex Kapranos and Alisdair Roberts, and despite its somewhat impenetrable surface ("It's actually a pretty odd record"), the album was a slow-burning success, fueled by word-of-mouth praise. In June 2013, a year and a half after it's release, the record was named 'Scottish Album of the Year' at the prestigious SAY Awards; beating off competition from the likes of Django Django and The Twilight Sad. Not that he's getting carried away in the aftermath of victory; "The purpose of the record was completed by the time we finished recording it. So in terms of that, it was very successful. The fact that it turned out to be commercially popular as well obviously makes me happy but I didn't expect it."

With that kind of attitude, it's no surprise to find that he isn't resting on his laurels. A new record, Breaks & Bone, will be released on September 27th via Chemikal Underground. This time though the approach is somewhat different as Hubby takes over all the vocal duties himself. "It seemed like a natural progression," he says, before adding, "It fit well with the subject matter too. It's basically about me letting go and saying goodbye."

Which means that this record is the first to really tackle that aforementioned difficult period of his life head-on. "The idea behind Breaks & Bone stems from an exercise that a few of the therapists I had seen over the last couple of years asked me to (unsuccessfully) do. Basically, they asked that I write a letter to each of my parents so that I may have the opportunity to say the things that I never got a chance to. I thought that it would be more effective for me to write a song for each of them instead."

Fans of his signature guitar style shouldn't be worried, however. Breaks & Bone is still very much built around his unique way with six-strings; the vocals only creeping in sporadically like the measured voice in a conversation, only speaking when there's something that needs to be said. He's not turning in to a classic singer-songwriter just yet: "There's a very fine line between being emotionally honest and being self indulgent - or worse, trite - whilst writing about personal matters. I try very hard to not just be another thirty-something bearded white guy with an acoustic guitar and a broken heart." Unsurprisingly, Breaks & Bone is a heart-breaking record at time, but for all of its weighty subject matter it's never morose; it's a beautifully insular album that comes wrapped up in something that sits between both redemption and hopefulness. "I wrote Breaks & Bone as an ending of sorts to that chapter in my life. I wanted to say goodbye to my parents and start dealing with the fact that this kind of depression doesn't really go away."

So, we should see this as the start of a new chapter. However, with that in mind, is there now less of a propensity for him to bury himself in performing? "The whole point of writing and performing this music is to give me some catharsis," he says. "It's never been about anything else. I suppose there's some irony in the fact that I'm more emotionally honest onstage than off. That started to change over the last year or so, however, and heavily shaped Breaks & Bone. Performing and talking is still very important to me, just not as essential to my mental well-being as it used to be."

Sometimes it's easy to forget that songs and records come from real-life. That separation between performer and listener can make it difficult for us to take a step back and remember that there isn't a pre-planned story arc to these things and therefore not always a happy and concise ending. RM Hubbert's journey has been more difficult than many of us can imagine, and also one that's been lived more-or-less in a very public eye. In an attempt to wrap things up succinctly, I ask him if he's learned anything about himself over the last few years, and he says simply, "that I can be happy". It may not be a Hollywood ending, but its a thoroughly rewarding one nonetheless.

New album Breaks & Bone is out this week on Chemikal Underground.

The RM Hubbert tour takes in the following dates:

Belle and Sebastian: Frozen in the Mo...