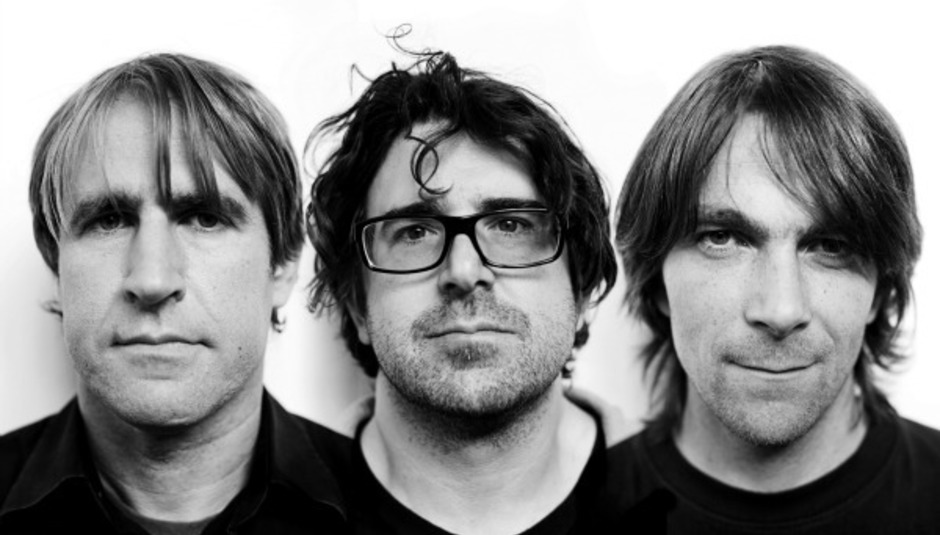 Continuing 2013's grand tradition of bands returning from Chinese Democracy-worthy periods of inactivity, Sebadoh join My Bloody Valentine, The Pastels and Mazzy Star on the roll call of artists putting over a decade in the wilderness behind them with new records. Defend Yourself is the first full-length from the Massachusetts trio - now featuring former Fiery Furnaces man Bob D'Amico on drums - in fourteen years.

Having once appeared, in the mid nineties, on the brink of a mainstream breakthrough that never quite came off, it'd nevertheless be doing Sebadoh a serious disservice to consider them nearly men; having carved out a signature sound that expertly toed the line between indie rock and lo-fi and married it with a forthright - sometimes brutal - emotional honesty in their lyrics, their ongoing influence is not in question. Frontman Lou Barlow barely sounds as if he's aged a day on Defend Yourself, despite juggling enough projects in the interim to make a compelling case for the title of hardest working man in rock. We caught up with him fresh from a European tour with Dinosaur Jr., and discussed his plethora of commitments, the creative process behind the new record and the heartbreak that revisiting old albums can evoke.

It's been fourteen years since your last LP, The Sebadoh - what led to you taking a break from the band in the first place?

I think we just felt that the writing was on the wall, in all honesty. For one reason or another, that record more or less tanked; we weren't getting radio play anymore, and we were playing to relatively tiny crowds, compared to maybe four or five years prior. We had a very humbling experience with that album, and just retreated, I guess.

How did you actually feel about that record?

I really liked that record. You know, every time I do listen to it - and once in a while me and Jason will pull it out if we're a little drunk or something - we get angry. We're like, "this is a good record! Why weren't people into it?" I mean, Sub Pop, who put it out, were almost totally disinterested in it. We got dropped within about a week of it being released. We just faced a lot of resistance when we put that record out, especially in the States. it was weird.

Do you feel as if changing tastes were responsible for it flying under the radar?

I think that had something to do with it, for sure. That was when bands like Modest Mouse were emerging, and even, like, the beginning of the time of The Strokes and Interpol. Bands were starting to become a little more image-conscious; they were wearing suits, and the music was becoming a little more stylised and sophisticated than your Pavements and Sebadohs.

What was it that got you back together, initially?

Jason and I were always in contact, and we were invited to play the tenth anniversary of Domino Records, which was probably in 2002 or 2003. We were actually the first record on Domino; Rocking the Forest, I think, was Domino number one, so we were asked to play this celebration around that, and Jason and I did it as a duo. We came to London for it and played a bunch of shows around it, and had a lot of fun.

Did you always intend to make another record as Sebadoh?

I think it was always on the table. I don't think Jason and I ever had any intention of not continuing to play together, and the idea of making a new record was definitely always there; it's just that we didn't start speaking definitively about it until a couple of years ago. We sort of switched from saying, "we could make a record" to "we will make a record". I guess we just felt like we had the impetus to start writing together again.

I read that around the time you released the Secret EP last year, you were considering crowdfunding Defend Yourself. Did that happen?

We didn't go down that road in the end. I mean, obviously the money that we made from the EP did help us to forge ahead with making the record, but I think we figured out pretty quickly that the idea of full-on crowdfunding wasn't going to work for us. We did a lot of research into how that kind of thing works, and it just seemed as if, one, it wouldn't be any easier to make it that way, and two, it wouldn't necessarily be any more honest either. A lot of the fan-funding stuff, I found, seemed a little disingenuous when I looked into it, especially in terms of some of the companies running it. It isn't quite what it seems, put it that way.

How did you come to be involved with (current drummer) Bob D'Amico?

Well, Bob toured with Jason back in 2002, I think, when Jason put out a solo record, and then they were also in the Fiery Furnaces together; they were the rhythm section for a few years. It just seemed logical to bring in somebody with an established musical connection.

Do you find it difficult juggling your commitments with Sebadoh and Dinosaur Jr.?

I like it. I find that one always feeds my desire to do the other. To be in more than one band at the same time is how it's been since the beginning, really, because Sebadoh started when I was still in Dinosaur Jr. the first time, in the eighties. Then in the nineties, I was doing Sebadoh, Folk Implosion and solo stuff all at the same time, so I guess I haven't really ever worked another way. It's all I know, at this point.

Now that you're contributing songs to Dinosaur Jr. again, do you find you have to approach the writing process differently in that band than you would with Sebadoh?

I find that I have to be very explicit with my ideas when I take them to Dinosaur Jr., whereas when I take stuff to Jason and Bob, I can afford to be MUCH more impressionistic about things. The Sebadoh stuff doesn't have to be as formed, because I can expect those guys to be engaged with and paying attention to what I'm trying to do from the get go. It's a little bit different in that respect, but ultimately, I think the melodic and lyrical ideas are pretty similar. They're all coming from more or less the same place.

How about the recording process? Any major differences between the two there?

I guess the main difference is that with Dinosaur, when we go to J's house to record, he has the most incredible array of equipment there, and has an assistant to help us - he basically tracks everything for us. With Sebadoh, it's just the three of us, and Jason records and engineers everything. Honestly, both things are pretty homespun. I don't feel like I have to readjust when I go back to one from the other.

Did you write the songs for the Secret EP specifically for that release, or did they come from the same writing sessions as the Defend Yourself tracks?

The Secret songs are from the same batch as the ones on the record ultimately came from. I think what happened was that Jason and I felt like the songs from the EP weren't the strongest out of what we'd written, so we wanted to work on those first, improve them and clean them up a little bit, and as a result we ended up with those as the first finished songs. In retrospect, though, I think they ended up as strong as anything on Defend Yourself, so I guess it was worth the effort.

Did you find it difficult to write with Jason again after such a long time away from it?

We found it easier than ever, really. I guess the main factor in that was touring; musically, we were as tight as we'd ever been, because we were going out and playing twenty-five, thirty songs more or less every night. Then there's just the fact that the three of us had spent so much time together, in the van and on the road. You know, all of those tours were great, and I think we just came off of all that with a lot of good will, and a lot of positive energy going into the writing and recording.

The last time you were in the UK, Bakesale had just been reissued, and the setlists were dominated by that record and Harmacy. Why wasn't Harmacy reissued too?

To be totally honest, I don't know why any Sebadoh record would be reissued. I mean, they're not unavailable, and none of them are considered classics - I don't think we've ever been that highly regarded, really. I assume that there's loads of the original pressings still sitting around in the warehouses at Domino and Sub Pop, so it's not like they're difficult for people to find. I just feel like reissues are often kind of a gesture that you make to try to tell people that a certain record's important, and honestly, if people don't make their mind up about that the first time round, I don't know why you'd try to convince them years later. No one's really demanding a Harmacy reissue, and anybody that is, you'd have to assume, would be somebody who bought it in the first place and would want it based on the fact that there'd be stuff with it you couldn't get on the original. For me personally, there's a lot of heartbreak and disappointment associated with that record. We were kind of expected to make this real triumphant breakthrough with Harmacy - a ton of money went into it - and for a variety of reasons, it just didn't pan out that way. I don't think I'm ever going to be in any hurry to re-address it.

Being so busy, will you have time to go out and tour extensively for Defend Yourself? Do you ever feel like one project compromises the other, in terms of your time?

Well, 2014 is totally open for me. It's all going to be about Sebadoh. It's all gonna depend on booking agents and so on, but we totally want to come back and play everywhere, if not everywhere twice, you know? I mean, things have always been planned out well enough that I've known how much time I was going to have with each project, and I guess part of the reason that we put off making a Sebadoh record is because we wanted to wait until we knew we'd have enough time to follow it up by touring properly.

Do you have anything else planned - more solo material, or new collaborations?

I started a project with my friends Imaad Wasif and Dale Crover, and there's going to be a seven-inch out later in the year under the name Tres Padres. I've definitely got songs I want to work on at some point for a solo record, but I don't know - it might be exciting to just get started on another Sebadoh record as soon as possible, you know? I guess there's always something.

Defend Yourself is out now on Joyful Noise Recordings.

The band play the following UK shows in October: