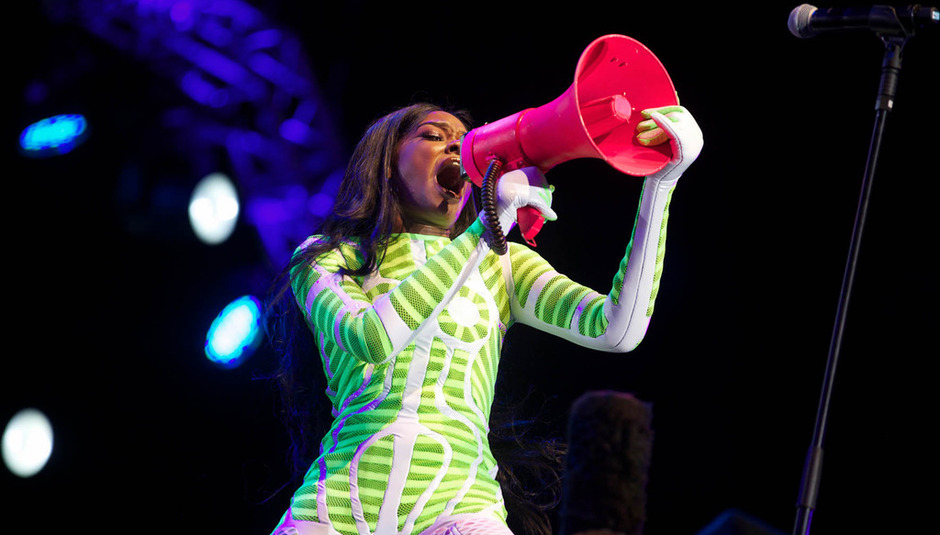 Few festivals demand the blazing sun more than London's Lovebox, a three day devotion to hedonistic dance music and big-hearted pop. And so it was with a palpable sense of glee that the festival's Twitter feed advised attendees on Friday morning (and indeed the Saturday morning and the Sunday morning after that) to drink plenty of water and load up on sunscreen, setting the scene perfectly for a tenth year anniversary of Lovebox more than able to withstand a few notional disappointments.

Some criticised the decision, for instance, to put Azealia Banks as the Friday headliner above more established legends Jurassic 5, and it’s difficult not to have a feeling that they have at least something of a point. On paper, the choice might seem like an attempt to pander to the young and fickle Radio 1 crowd, but in reality, the move plays out as a brave and savvy piece of scheduling.

Jurassic 5 – don’t get me wrong – were electric, moving through their material with a vibrancy of a band exploding into life rather than looking back on a career. But Banks served as a fitting climax to the evening all the same – ultimately more forward looking and youthfully propulsive than the 5. Grinding in the face of her inexperience, songs like ‘Harlem Shake’ and (predictably) ‘212’ pay off Lovebox’s gamble, and vindicate the decision to put the spotlight on fresh talent rather than established acts.

Of course, one of the most notorious moments of the weekend came in the form of Lil Kim’s no-show (the reasons for which depends upon whose Twitter feed you believe). With this being her only festival date of the summer and the first UK appearance in years, the literally last-minute announcement of the cancellation could have derailed a lot of festivals beyond repair, but the out-for-fun, up-for-it attitude prevalent at Lovebox ensured that this wasn’t the case.

Looked at in one way, it could even have been a blessing in disguise for the day’s momentum, as it was hard to see how the Queen was possibly going to follow the rapturously received Kelis. Balancing old favourites and strong new material with perfect balance, her Sunday set neither contrarily withheld her hits nor inhibited itself from showcasing lesser known newer work. The inevitable airing of 'Milkshake' – generously melded with Madonna’s ‘Holiday’ and Cindy Lauper’s ‘Girls Just Wanna Have Fun’ – came across as crowd pleasing in the best sense of the word, delivering a jolt of indulgent pop-perfection to a crowd who wanted only to be pleased, kicking up the dust and scorched grass in heat-defying ecstasy.

One of the kindest things you can say about Lovebox as an event is that, at any given moment, its atmosphere doesn’t seem to be dictated by the size of the names on a stage, or the hype machine pushing crowds towards any particular part of the line-up. You’re as likely to see the most high-energy, appreciative crowds dancing to the soundsystem of the pizza van as you are the main stage. And so even as the wheels felt like they were coming off Sunday’s schedule slightly, it’s testament to both crowd and performers just how resilient the atmosphere proved itself to be.

The true highlights were away from the safe headliners, but instead to be found in mid-afternoon performances like DJ Yoda smashing 'Push It’ with a live Siberian horn section – moments which command the body with as much fun-filled force as dance music at its absolute best. And it’s these sweat-down-the-back, wide-beaming moments of summer which are the hallmark of Lovebox’s finest qualities; permeating a festival which continues to strut the line between underground-boutique and the hyper-mainstream with remarkable success.

"Having your sister in the band help...