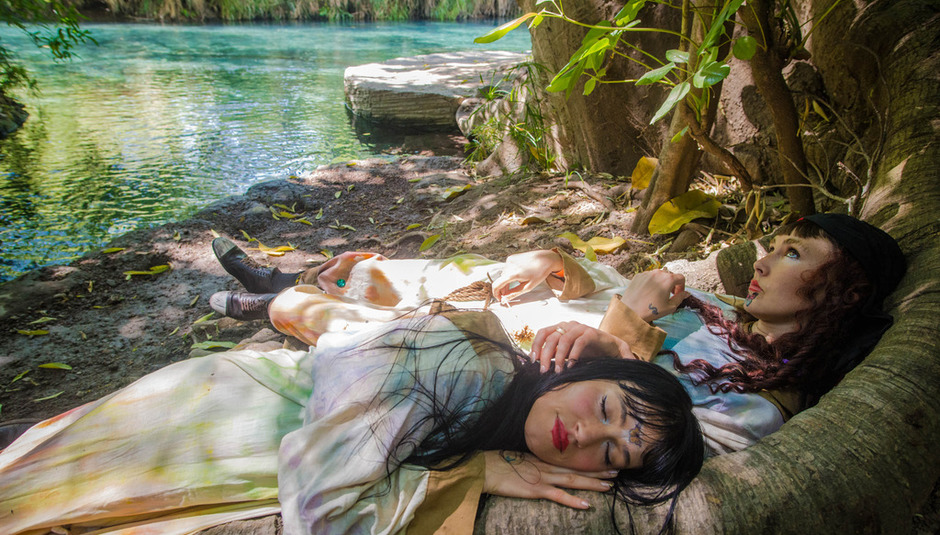 Given the turbulent, unorthodox nature of their formation - a pair of estranged sisters who reunited as adults on the other side of the Atlantic - it's no mean feat that CocoRosie have clocked up a decade together this year. Over that period, Bianca and Sierra Casady have averaged a record every other year since they debuted with La maison de mon rêve in 2004, and carved out a fervent enough cult following to secure a deal with Sub Pop back in 2010.

Tales of a Grass Widow, released back in May, is their fifth full-length, produced by Björk collaborator Valgeir Sigurðsson. It's hardly a radical enough shift from their usual sound to do away with the lazy 'freak folk' label that's so often applied to them, but there's a subtle move away from abstract lyrical themes and a renewal of their long-running collaborative relationship with Antony Hegarty of Antony and the Johnsons. Fresh from an appearance at Latitude Festival, we caught up with Sierra to discuss her unique bond with her sister, their new political project and why they choose to take their cues from visual arts rather than music.

This year marks the band's twentieth anniversary. Has it gone by quickly?

Definitely. You tend to lose a lot of memories on the road. We've been on tour practically the whole time we've been a band, and the touring cycle tends to turn everything into a blur. Everything passes by you pretty quickly when all you're doing is travelling.

There's a fascinating story behind how yourself and Bianca went from estranged sisters to bandmates - could you tell us a little about it?

Yeah, we had a pretty interesting childhood, to put it mildly. We were the youngest of eight children growing up, and that just meant that we were constantly in survival mode, I guess. You're in this ruckus, fighting over little things all the time, and we lost each other in the midst of that and never really had a relationship. Later, once we were in our twenties, Bianca was travelling through Europe, and I was in Paris studying classical music. She decided to stop by, which at the time I thought was a pretty awkward idea; I guess that tells you a lot about how little we knew each other. She stayed the night, and just never left.

The new record is called Tales of a Grass Widow. What's the story behind the title?

The grass widow is a poetic term that we've kind of redefined for our own purposes. It refers to an abandoned child and other characters of a similar disposition; castaways, underdogs, outcasts from society, the oppressed and unrecognised - these are all characters that come up in the song and are all kind of a widow in their own ways. It was Bianca who thought this up - she's kind of our house poet.

Is that how you come up with the broader lyrical themes on your records? Do they originate as poetry or do they tend to develop in tandem with the music?

I'd say that poetry is a big source of inspiration for us all the time. Bianca's always writing, and she's a very committed writer; most of her work is stream of consciousness stuff, and a lot of the time it isn't something she understands clearly, but she has a commitment to trying to figure it out. A key part of that is through the music; I think we both often understand lyrics better by the time the music that accompanies it is finished.

Is there a specific process that you stick to when writing songs?

It's different all the time, but I know, for example, we wrote the song 'Child Bride' together in one space. I was playing the harp and Bianca was on her typewriter, and it all came together pretty quickly. She got off the typewriter, we started singing together, and we took it from there.

The lyrics on this record seem less abstract than before; a lot of them are concerned with the earth and are generally a little more of this world. Was that something you were aiming for?

It wasn't exactly an aim, but it was more about a commitment to what we felt was instinctive for us, and that's always changing; right now, we're more into issues, politics and environmental stuff, which is why you're hearing that on the record.

Two tracks on the record - 'Tears for Animals' and 'Poison' - feature Antony Hegarty from Antony and the Johnsons. Did he have any influence on the lyrics for those songs? They seem to share similar, natural themes.

He wasn't directly involved with the lyrics, but we've always kind of considered Antony as being the voice of Mother Nature for us, and on those songs he's representing this earth power or natural energy, whichever way you want to phrase it. I think he's the one artist we feel that we've always had standing behind us - he's incredibly supportive.

Given the close bond yourself and Bianca share as sisters, is it difficult bringing other musicians into the mix?

You know, I've actually never been asked that question. It's a simple idea, that we're close because we're related, but there's a lot of resonance to it. Somebody was telling us after our show last night that the bond we have on stage represents the human side of our band, but I don't think it's an obstacle to collaboration.

Whenever I read about your work with Antony Hegarty, there's always reference to how you've come from the same scene, and other artists like Devendra Banhart are usually mentioned, too. Is that accurate? Is there some kind of collective?

It's true to some extent. We're all very good friends, and we continue to spend time together whenever we can. We make a lot of music together, even if it's not intended for recording - we love singing together, so it's enough just to do it for our own enjoyment. At the moment, we have a new group that will hopefully be going public by the end of the year, called the Future Feminists. It's something we've been developing with Antony and a few of the others. I do think we're artists that have found a kinship through each other's creativity, and we've been very lucky in that respect.

Can you tell us a bit more about Future Feminists? Is it a musical project?

It's a dialogue between artists. Hopefully there'll be some exhibitions with musical appearance by ourselves and our friends, but primarily it's a dialogue through which we're looking for solutions, relating to issues about ecology and the treatment of women and children.

When you first released 'Tears for Animals' last year, Dave Sitek produced the single. How did you come to work with him?

We're really good friends with Dave. In a way, we began our musical career with him; he was very present in the early days. We toured together very early on, and he helped us to have the confidence that we could do this full time in the first place. It's very special working with him, because it's so rare to find an artist with such powerful improvisational ability. He works from a very intuitive place.

What made you choose to go with Valgeir Sigurðsson to produce this album?

We didn't think about it too much. We were kind of in a rush to get something out; it's been a while since we've made a record with this kind of speed, this kind of energy. For years, it's been about us taking our time and really trying to enjoy the process, but this time we were too excited about jumping on the road and putting something out. To be honest, this record came together super quickly and there wasn't time for much consideration - it was basically done and dusted over two weeks at home, and then we went over to Iceland just to work a little bit on the architecture of the record and some of the beats. We were happy to go with Valgeir, but we didn't spend too long thinking about how important the choice of producer would be.

Do you find life on the road more or less enjoyable now than you did in the past?

I don't think much has changed, really. We've always enjoyed the road; we basically grew up on it, so it's something we're very much used to. It really feels like home at this point. It's as fun as it's always been.

Any particular regrets over the past decade of CocoRosie?

There's gotta be a lot of regrets, right? That's part of the process. We're always kicking ourselves and thinking "fuck, what if we'd done it this way?" But it's great having your sister with you as part of the process, because it helps you keep things in perspective, and you can laugh a lot of that stuff off. You feel more comfortable making fools of yourselves and taking risks. We're always fooling around and fucking up, but I guess that's the way we like it.

Are you still living in Paris?

Not anymore. I'm waiting to relocate at the moment. I don't live anywhere; I'm waiting for the next landing spot.

Do you feel as if the band is received differently in Europe and the U.S., having lived on both sides of the Atlantic?

Europe is amazing. I think you can tell there's a lot of money available for the arts in some of these countries; we visit some very elegant, beautiful theatres. In the States, there's a crowd that's just vicious and young, and they're ready to have just as much fun if you're playing in a grimy club. After a while, you're happy to forget where you are as long as it means you can have a good time.

I would usually ask what you've been listening to recently, but I've read in the past that you don't listen to a lot of music. Is that still the case?

Yeah, we're not huge on just filling our heads with any old crap. We don't watch TV, we don't read the newspaper and we don't listen to a lot of music, really. There was a week while we were recording this album when we were obsessed with Philip Glass' Dracula soundtrack, but it's rare that we have a special connection with a specific record like that. We certainly don't just turn on the radio and blast out whatever's playing.

Would it be fair to say that you take more influence from other sectors of the arts, such as visual arts?

I think that's true. Imagination is very important; it's a delicate thing, and you need to cultivate a space and atmosphere in which imagination can exist, and be active, and have the space to kind of run wild. The other arts allow us to breathe and not feel totally claustrophobic - it sounds strange, but the fact that we're musicians makes us want to avoid being overexposed to music.

Tales of a Grass Widow is out now on City Slang.

"We still get people yelling for us t...