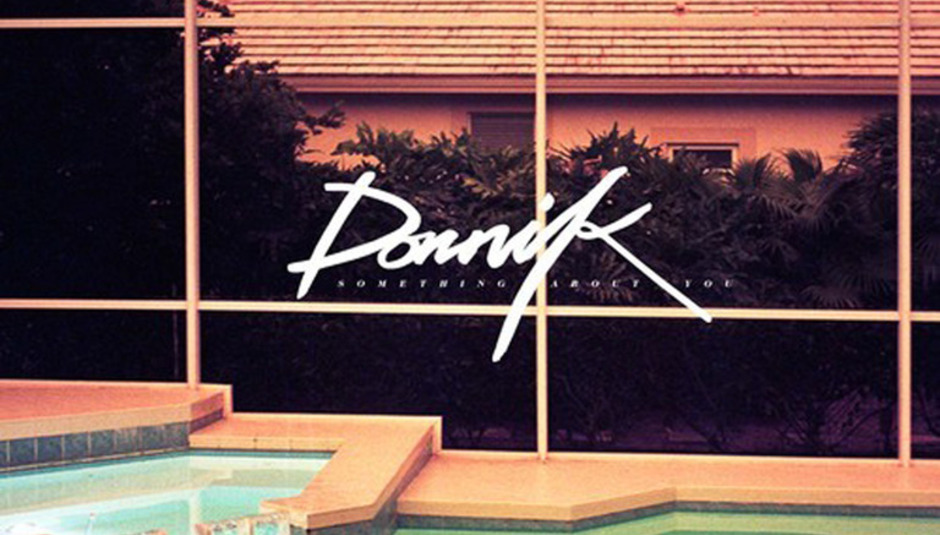 Hiya. It's time for your weekly dose of singles, tracks and amorphous offerings that have been placed upon the internet. Washed Out, AlunaGeorge, Siblings, Deap Vally and Everything Everything have all been kind enough to contribute to your listening pleasure below. They're good like that.

Dornik also revealed himself to the world late last week, leaving just enough time to grab Single of the Week with the wonderfully amorous 'Something About You'. On a less celebratory note, Dizzee Rascal's 'Goin' Crazy' is inexplicably woeful.

Dornik - Something About You (PMR) It’s been four years since Michael Jackson died and, since then, the entirety of R&B seems to have been in perpetual mourning. Even Justin Timberlake, a man who inserted a 30 second beatboxing interlude into ‘Rock Your Body’, returned from his self-imposed hiatus with a ‘mature’ album in hand. Albeit one that equated copulating with your wife to eating a load of strawberry-flavoured Hubba Bubba.

I’m tired of all this seriousness. I want to know who’s going to create the next ‘Remix (Ignition)’? Who can embody the modern day spirit of Nelly and Kelly? Surely there’s a singer out there who can fall in love without having to down a ludicrous amount of cognac first?

As it turns out, there is and his name is Dornik. For buzz-building reasons, Dornik’s true identity remains a mystery. He was a drummer in Jessie Ware’s backing band, he’s signed to PMR (see also: Disclosure and Julio Bashmore) and ‘Something About You’ is his first track to be uploaded to Soundcloud. This is all the Dornik-related knowledge that's available to the world and, frankly, none of it matters.

If you’re a soppy sod like me, you’ll be satisfied just to hear a boy singing sweet nothings to his beau in simpering falsetto. Bolstered by a dreamy backdrop of syrupy synth and cascading bleeps, the track plays to old time romantic notions of infatuation. “Girl I think about you every single second every day, I just can’t help myself babe,” coos Dornik between fits of the laughter. Doubtlessly this London-based crooner isn’t averse to carnal pleasures. He just seems the type to buy you dinner before cracking on with any hanky panky.

Refreshingly, there’s not a hint of artistic turmoil on show with ‘Something About You’. Any inner torment is either nonexistent or unworthy of inclusion. I’ve no doubt Dornik can sing the blues. Like the King of Pop, he knows it’s rhythm and romantic theatrics that really get the people moving.

Washed Out - It All Feels Right (Sub Pop)

Taking a leaf out of Animal Collective’s book, Ernest Greene has elevated Washed Out from an intangible collage of electronic squiggles into something bright, booming and lustrous. As such, ‘It All Feels Right’ straddles that irresistible line between shimmering surf-pop and opaque psychedelia. One day it will be used to soundtrack a slow motion movie montage of two star-crossed lovers gallivanting about in a corn field. In the meantime, soak up its wondrous array of strings, stare outside your office window and briefly contemplate the thought that this life malarkey isn't so bad after all.

AlunaGeorge are re-releasing their glitching earworm ‘You Know You Like It’ and, to celebrate, they’ve gone and had a big budget pool party. Sadly, the budget didn’t stretch to filling the pool with water but all the extras got a trendy haircut and some modern dance lessons; so that’s nice.

While we’re still on the subject of AG, as no one is calling them, why not bask in the awkward magnificence of their album cover for Body Music. Poor George seems to be so embarrassed by the situation, he’s covering his eyes to avoid staring directly at Aluna. Given the wall of mirrors surrounding him, this strategy won’t help much. Siblings are a sprightly young band from Derbyshire with a heady penchant for handclaps and harmonising. Their latest double A-side single ‘Fools’/’Norway’ channels the spirit of Vampire Weekend and Dirty Projectors into a beguiling sun-kissed cocktail. ‘Fools’ is the proper highlight: it whisks together shuffling percussion and tremelo guitar so they balloon into of cloud of blissful melody. Give it a listen and you’re toes will be soon be tapping away like a vintage typewriter.

If you’re going to form a blues-rock duo, then you can’t afford to run short on charisma. This is not a problem Deap Vally are going to encounter anytime soon. ‘Baby I Call Hell’ is fizzing with enough primal energy and badass stomp to power an industrial mining facility. It’s as though they formed the day after reading Mötley Crüe’s The Dirt with the sole intention of showing Tommy Lee up as a prissy mama’s boy. Job done then.

Hey you! Ever wondered what Jonathan Higgs would look like when perched on top of a strident white stallion while wearing a grey suit and luminous yellow shirt? Well, so has Jonathan Higgs and seeing as he directed the video for ‘Don’t Try’, he was able to make his Twin Peaks-esque dream a reality. Such are the perks of being in a rather splendid indie quartet.

‘Hey Robbie’ ‘Hiya. Who is this?’ ‘It’s Dizzee. Dizzee Rascal. ' [silence] ‘Won a Mercury Prize back in 2003... Used to be in Roll Deep with Wiley.... Collaborated with Calvin Harris...’ ‘Sorry mate, I’m not really into urban music.’ ‘That’s exactly why I want you to be the featured artist on the lead single from my new album.’ ‘Come again?’ ‘Yeah man. It’s called ‘Goin’ Crazy’ and sounds even worse than the shite I was peddling on my last record.’ ‘And you want me to sing on it. Why?’ ‘Think about it man. Radio 2 love your middle-aged geezer act. Radio 1 love my bland dance-rap. We could make millions.’ ‘But you just said it was even worse than the shite.... Wait. A. Minute. If I say ‘yes’, does that mean I’ll get played on Radio 1 again?’ ‘Almost certainly.’ ‘I’m tempted but how bad is the song?’ ‘Well there’s a bit where I rhyme ‘puzzle’, ‘rubble’, ‘double’, ’subtle’, ‘trouble’, ‘juggle’, ‘huddle’ and ‘shovel’ together.' ‘So really bad then?’ ‘Yeah. It’s the worst thing I’ve ever done.’ ‘And you say I’ll get played on Radio 1 again?’ ‘Sure.’ ‘Alright. I guess I’ll do it.’