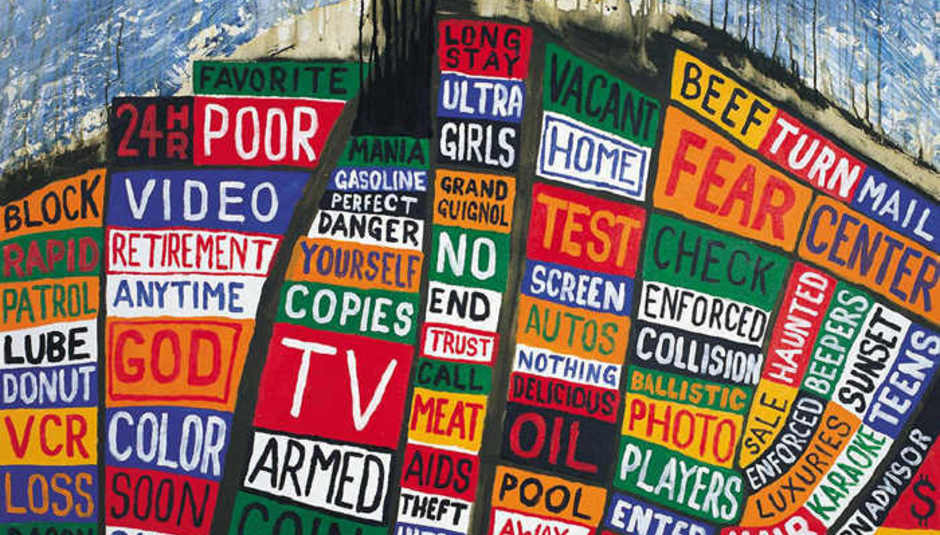 Between the message boards and editorial arm of DiS, we’ve always felt discussion of new records should be just that - a discussion. Our editor Sean Adams once described the site as "an aggregator of individual opinions", and it’s in this spirit that we introduce a new feature: two writers, with two clashing opinions on one canonical record (- Read the first installment - 'Fighting Over The Postal Service's Give Up' here). As ever, neither represents a DiS 'party line' - these are two fervently passive-aggresive fanatics, serenading the abyss to their hearts’ content. Maybe we're approaching total subjective transparency in music reviews, or maybe for you this all falls under the same cynical umbrella. Probably you’re thinking, ’I don’t care, stop talking to me. I have a family and several cats to feed’. That too is totally understandable. In any case here’s the second installment, which celebrates the 10th anniversary of Radiohead’s divisive sixth LP, Hail to the Thief.

An Overlooked Masterpiece, by Jazz Monroe - 9/10

‘It is all a corporate tie-in. The sunscreen, the marketing, the fear, the disease. You can’t have one without the other’ - Babette Gladney, White Noise

Radiohead have always been outsiders, whether in the social or musical sense. Kid A, Amnesiac, OK Computer - all these wear millennial fatigue on their sleeves. But it wasn’t until Hail to the Thief that the band fully matured. Seeking harmony between advancing technology and pop’s more native sounds, the record is less concerned with documenting the modern condition than exposing its rusty cogs. It’s discreet and austere - a masterpiece, but a less obvious one.

Once purveyors of paranoia, here Radiohead became its cosmologists. Like David Foster Wallace or Delillo, HTTT explores the mediums through which modern people exist - newspapers, TV, the internet. Songs like ‘Scatterbrain’ and ‘Go To Sleep’ (alternative title: “Little Man Being Erased’), not to mention the cover art, paint a modern malaise borne of fear, confusion and oppression. But elsewhere there’s a kickback, social disappointment transfigured in proto-revolutionary terms. It boils down to a skewed celebration of our freedom of thought. Most impressively, they pull off political songwriting before the same trendkeeping audience that vilified it.

That the title refers to George W.’s dubious election in 2000 is hard to dispute, but ultimately real-world specifics are moot. Take it from Johnny Greenwood: “The parts of the record I really respond to are the sound of Thom shrugging his shoulders and saying ‘I’m gonna go home and look after my family and make sure I’ve got enough food for my family when it all kicks off.’” That is to say, for all its titillating political readings Hail to the Thief is first and foremost a profoundly emotional thing.

It’s evident in the music, the oppressed space and textural diversity, which complements themes of resistance to totalitarian authority. Like Loveless, its sound is of a vintage so resolutely uncopiable and, production-wise, downright obscure that it could scarcely sound fresher. ‘2+2=5’ opens proceedings with a red herring - plugged-in guitar noise to wipe clean the Kid A/Amnesiac slate. Yelps of “hail to the thief, oh!” are mangled as a goose-steppy “hail-two-three-four”. Its chorus expels more righteous fury: “YOU HAVE NOT BEEN PAYING ATTENTION!” (lyric booklet’s caps), at which you hardly care who he’s chastising - Bush, Blair, himself, even you. At gut level, you simply agree.

Hail to the Thief insists that civil obedience is the easy way out. ‘Sit Down Stand Up’ climaxes with a shamanistic chant impelled to insanity by fervent ticks and feverish percussion. “THE RAINDROPS” it repeats, forty-six times, sung to be aurally interchangeable with “ARRANGE US”. The message is simple: that we have choices: to resist our complicit role as citizens; to withdraw entirely (as on Kid A); or to remain in time and key, hailing the thief who’ll walk us “to the jaws of hell”, who can wipe us out “anytime, anytime”.

An Undercooked Mess, by Willis Stevens - 3/10


Well, you make some pretty big reaches here. I mean, yeah, maybe the whole ‘Sit Down Stand Up’ thing means that. But isn’t it more like, ‘Ooh look at us with our creepy samples guys!’ Is the meaning blurred because we’re all pawns on the intricate chess board of Thomas’s intellect, or had Radiohead become awkward bastards with few ideas and much major label time? Perhaps, perhaps.

Thing is, it seems to be you that has not been paying attention. You “don’t care [or know] whether he’s chastising you” on ‘2+2=5’? Wasn’t the point of all those snidey pre-Kid A tracks that political beliefs should be got for oneself, not from some soapbox celebrity?

That’s why ‘2+2=5’ stands out. It’s the only thing with a pulse. Notionally rebellious, this is music that shoots through the ozone in a blaze of intellectual sloth and apathy. Sure enough Hail to the Thief scrapes the barrel of insufferable Radiohead fans. We have strong opinions on coffee and chocolate bars. We subscribe to (but never read) Wire mag. We laugh condescendingly at lowbrow TV shows because how else to justify watching the same stuff as normal people.

That's not to forget the sturdy old guard, the same modern bourgeoisie the band tried to ridicule - unsuccessfully, clearly - as early as ‘No Surprises’. Meet the post-consumerism Radiohead consumer, the addict of news and rumours and catastrophes. Tight morals and wall-hung rugs, cow-friendly leather in lounges-not-sitting-rooms, glassware cabinets, minimal white tables, African masks. Too busy to revolt but too World Conscious to ignore. So buy organic-free-range and drop a tenner on three Big Issues a year and let’s call the whole thing off, yeah? Done! Good careers, bad dreams and well-behaved kids with suicidal tendencies.

Hail to the Thief’s is a world where ‘Getting Radiohead’ is another commodity to be traded-up and revalued by the post-secondary elite. The stalwart culturati dropouts of the middle-class, -brow and -road who lay down Eastern rugs and pray towards Habitat five times a day. There’s a reason their favourite Radiohead record is stuffed with nonsense. It’s because these fans, they like Radiohead but they don’t really know why. The vague politics and the funny noises, that’s what it’s all about eh? Go paint a sheep, folks - Radiohead don’t need you.

JM: It’s true that Radiohead burrow beyond rock’s surface appeal - they find vulnerability in the genre’s jerky Freudian aggro - and naturally some people get onboard simply because it sounds fantastic (which it does).

But Hail to the Thief rejects petty generalisation altogether. Radiohead’s disdain is well-aimed - not against bad people but bad attitudes. For all the accusations of impenetrability, HTTT’s predecessor Amnesiac was actually pretty lucid on this point: ‘Knives Out’ laments ignorance towards the consumer diet’s origins - “Catch the mouse, don’t look down, shove it in your mouth” - while ‘Packt Like Sardines in a Crushd Tin Box’ attacks self-satisfaction and complacency: “I’m a reasonable man, get off my case” etc. What’s in question here is not the veracity of the speaker’s statement - we’re never led to believe he’s not a reasonable man - rather the assertion that ostensibly Doing Your Bit somehow redeems you of a deeper and society-wide responsibility.

That’s effectively the blueprint for HTTT, which unlike Kid A - recorded after Yorke’s much-publicised breakdown - launches its social appraisal from an emotional and philosophical stronghold. The escapist scatterbrain blues aren’t for everyone, but to hear it expressed so wisely and by someone so admired? Strangely enough it orders an untidy mind - a psyche distracted by western guilt, kitchen appliances, credit cards, spam mail, white noise, political corruption and whatever other socio-cultural ailments Radiohead lament.

Thing is, even the most furious revolution is incremental. Stage one is a will to change, and it’s as much as music is likely to ignite. (Given the West’s neutralised political situation, it’s probably as much as any individual will.) Radiohead pride themselves on their political nuisance factor, however infinitesimally tiny, and songs like ‘2+2=5’ (“I swat them like flies, but like flies the buggers keep coming back”) suggest even without a revolution of force, a power lies in collective minor resistance.

Ultimately though, the on-paper effect will never size up - there’s better poetry on the subject, undoubtedly. But isn’t that what’s beautiful about music? Its emotional universality, allowing the artist to squeeze blood out of sentiments elsewhere considered trite, cliché? Hail to the Thief is a moving, viscera-level thrill, from ‘Where I End and You Begin’ - Johnny’s career-finest use of Ondes Martenot - to the ubiquitous fairytale imagery (arks are built, skies fall in, wolves lurk at the door) which establishes a childhood villain with all the necessary sense of levity. It gently makes sense of a world where moral ambiguity reigns free, where paranoia is panoramic and the modern absurdity is such that sunscreen, to the most rabid paranoia consumers, might reasonably be considered “publicity for disease,” as Delillo’s Babette Gladney posits. On these points, Hail to the Thief is the definitive musical statement.

WS: Ah, the classic pseudohighbrow Radiohead fanatic. Keep up the passive-agressive anti-philistine crusade, pal, but you’re arguing with yourself.

‘I asked him if he was politicised when he was at Exeter University and Yorke displayed his trademark diffidence. "On and off. I didn't like all the factionalism and the language you have to adopt. But I was involved a bit, we managed to ban some of the Young Conservatives from the student union."’ Seriously? Can you believe this man persists into middle-age? ‘“And I was proud of that,”’ he adds, profoundly.

The fun doesn’t stop. Let’s take ‘Scatterbrain’, one you singled out for praise. Chorus hook: “Somewhere I’m not scatterbrained / Somewhere I’m not scatterbrained”. This is what the song hangs on. Empty longing. The feeble crywanky absorption of a man who never grew beyond “I don’t belong here.” I mean, we all did it, Thomas mate, we all rode the emo train out of adolescent county. But fuck me, you know you’ve made it when you’re midcareer, midthirties and still crying over that shit. Ah, but it’s a lifelong affliction - it’s effective because it’s shared universally, you argue, his simpering cast of mealy-mouthed disciples. Well sure, let’s say that’s true. But what you need is not this limp, vegetarian kind of alienation. Try chatting to somebody who’s actually wrung chicken-necks or worked nights for the kids’ Christmas presents. There’s a humanist perspective.

“There’s always a siren singing you to shipwreck,” sings Thomas on ‘There There’. I find the best remedy is to place fingers in your ears and scream.

Read the first installment - 'Fighting Over The Postal Service's Give Up'.