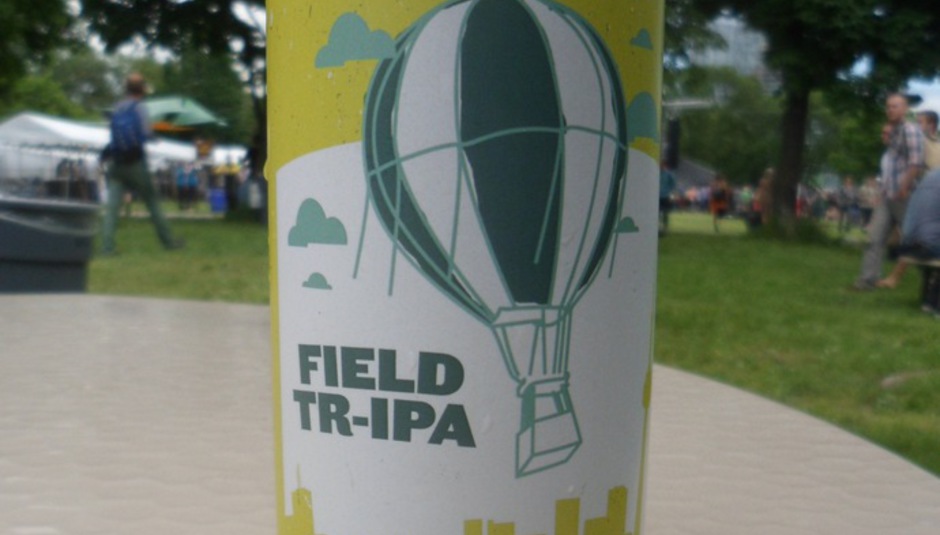 I moved to Toronto early in 2012. Never have I seen the city so seductive and colourful and contaminantly proud as at Field Trip 2013. Because the lineup represents a single label, Arts & Crafts, attendees share a certain sense of destination - an in-it-togetherness that’s not so much the usual intoxicated farce as something genuinely meaningful that reflects the music and attitudes of invited artists. Unlike say Glastonbury, where epiphanies of the spirit are subject to the whims of nearby amateur fire-jugglers, Field Trip attracts an audience as genuinely cohesive as it is genuinely diverse - in age, race, gender, body-ability - never seeming fractured or elitist or remotely bourgeois.

11:30 The site is vast and obsessively pretty. Held at Fort York, a place of military heritage prominent in the War of 1812, Field Trip 2013 commemorates a victory of perseverance, namely the tenth anniversary of Arts & Crafts. The food stalls present a spectrum weird and diverse enough to suit the festival to a T. ‘Beer battered mani mani fish tacos’ ($10 for 2!), garish hot dogs ($9 for 1!) - not to mention such happy-planet big hitters as Sunshine Orange Juice Co. and Indonesian Street Food.

Most notable in the punters’ realm is frozen yoghurt curiosity Fruittare (pronounced Froo-TAR-ee), some major league company offloading edible gewgaws to the indie market. There’s a smoothly-contoured rep vainly trying to hoist prizes - “badges and like bracelets and stuff,” she reveals - onto any passerby who’ll skippy-rope for ten. She stands beaming in the yellow rays, hula-hooping and hollering with the dead-eyed enthusiasm of a motorized mannequin on Dexedrine. Her station is a giant green chalk board intended for spirit-warming platitudes. The board is what interests me. I make a mental note to return later for a full moral appraisal of the festival. Walking around there are maybe 0.4 people per square metre, many of them unborn circa Broken’s last sustained period of activity. My logic-barometer lights up at sight of a functioning kids’ zone decked out with separate kids’ loos and a tremendous bouncy castle dressed as a carousel. No picture but you get the idea.

13:30 Broken’s stock can be weighed by their abundance of copyists. Plenty of low-billed upstarts show snatches of BSS-derived giddiness but first to really transcend ho-hum are the Darcys, who aside from looking totally the part in tight-everythings and fecund facial foliage are adept at rendering guitars like machinery being rewound, ie the Battles thing, as well as replacing choruses with blaring noise and generally making like a downbeat and neutered Liars hunting some transdimensional tormentor. 14:30 Zeus are today’s first proponents of an unexpected Arts & Crafts archetype: the vigourous soloing quadragenarian (role later filled by: Feist, Hayden, BSS guitar hero Andrew Whiteman). Zeus’s is an oeuvre that insists the ’60s just never wilted in radness; it’s like taking a beserker cable car through the decade, and while say the Flaming Lips may guide your hand, fly you to secret viewing platforms and share out the LSD, there’s a distant enthusiasm to Zeus that makes an engaging show.

(Five minutes after resolving to hold off on alcohol I give in and pay up - it’s almost, what, 3pm after all - for an official Field Trip lager, courtesy of the local Amsterdam brewery. Close inspection reveals only the plastered-on label is Field Trip-specific, but you know what? I’m glad they tried.) 16:30 “Are we going to a party?” an excited toddler-girl. The mother: “Yes, it’s a Bloc Party!” “You just went to a party on Sunday!” the father, triumphant, dismally misunderstanding the workings of the child-mind.

The transfer to mainstage is hectic, a bustling body-swamp. People are antsy; their $9 dinner came served in petri dish portions and it did not taste good. In the BP rush one girl is spotted hosing curried lamb from mouth back to pot for god knows why. The mainstage field is packed and all the mat-sitters are forced to stand. There’s excitement and warm familiarity when Kele strolls on with Vs-for-peace and a Jamaican shirt, starting ‘So Here We Are’. In an eminent flash that can’t be blamed on one beer alone I feel a weird joyful rush of gratitude that Bloc Party stuck around.

“Let’s get this party started,” gurns Kele, introducing something blippy and fractured called ‘Team A’ from new album Four. It’s actually sort of excellent, even when he sounds as if wringing a flannel at the end of every line. ‘Song for Clay’ is genuinely uproarious, a tune that has nearby children enraptured, totally losing their shit. ‘Helicopter’ proves the most timeless hit, however, setting foremost rows into vertical motion - the kind of fun political tune you’d tentatively suggest we could use more of these days, if you felt you could get away with it.

17:45 (It’s worth noting that over by West Gate the public truly are going wild for Fruitarre, twirling hoops and skipping in aggressive competition. These aren’t the shy twirls and skips of the goofy-ironic bedwetter, either; nor are perpetrators so agonisingly attractive as to adopt that arrogant kind of élan. It’s more a happy-social thing - they just enjoy it - which I think strikes a bizarre discord with my reserved English sensibility but whatever.)

18:00 After some slightly lacklustre second stage rustlings (perhaps better suited to a shadowy European bar, are Timber Timbre), I trek back to see Stars because, insofar as perhaps I’m not totally convinced of the band’s agreed-upon greatness, they seem like a potentially important live prospect, possessors of some integral Arts & Crafts zen I’d hitherto overlooked.

The music remains fey but plenty energetic, and though dressed to teach GCSE history Torquil Campbell is exceptional value, goofing cross-stage, wielding his melodica like it’s some first-day-on-the-job superhero’s favourite weapon. A ruddy man in front pulls his finest mock-earnest face miming faultlessly to ‘Elevator Love Letter’, as a nearby toddler joins his (the ruddy man’s) visibly entertained girlfriend in a canny robot-dance duet. It’s fair to say the atmosphere is euphoric.

One peculiar feat of Stars’ set is that everybody, including band members, seems to be time-transferred way back to whatever age they first heard the currently-playing song, a time of activism and youthful certainty that’s reflected in the day’s bands’ local-political asides. Maybe something about the reunited community and political openness and the whole nostalgia-foundation of Field Trip creates an environment where each fan believes her life significant, believes herself cared-about somehow, in a basic way that’s altogether missing from the irony-steeped, quotidian ‘indie kid’ reality. Stars think so. 19:15 A few beers down I’m impelled to the Portaloo arena, an ample collection that winds round in a vast snaking enclosure. The absence of your typical in-and-out pigsty urinal makes for an exotic and thriving destination, a kind of unisex Hamsterdam of impoliteness. A verbal breaks out as one man’s snooze-you-lose logic succumbs to “the righteous wrath of a woman who needs to pee” (onlooker’s words). The lines are five people long and appropriate queue selection proves a hot-topic. “Hopefully you don’t catch a shit” is a choice conversation starter.

19:30 Out of the loo and into the pack, it’s all systems go for Feist. Wearing a flowery art nouveau shroud, she comes off with the airy spiritual audacity of a non-old Neil Young. ‘The Bad in Each Other’ is performed with total five guitars onstage, Feist’s solo one of genuine emotion. Despite palpable confidence, she reprises trademark awkwardness between tracks: “I... I dunno, what could we possibly have to say to each other? Anything on your mind?”

‘1234’, undoubtedly the biggest hit on anyone’s setlist, gets the unwilling superstar treatment, its vocal manipulated into alien obscurity as Feist hunkers over pedals looping voice snippets, before a miasmic remix of the “da-da, da-da-da” climax underlays a crowd singalong. This takes a moment while said crowd locates whereabouts exactly they’re supposed to be singing along to. As straight entertainment it clearly was not for everyone - “I think that was supposed to be ‘1234’” deadpanned one person - but as a preservative anti-fame gesture it’s Feist-y and brilliant and not to mention perfect, all at once.

21:30 Broken Social Scene are set to play You Forgot it in People in full, which is terrifically good news for probably around 90% of fans. Since the second stage-schedule’s now wrapped up there’s pretty much everyone crammed into the main area, tension rising exponentially.

One boy sports a home-knitted The Smiths jumper, another reads a Kindle, smokers smoke. Crowd density intensifies. Opportunistic droves hustle by in gusts of farts and weed, seeking real estate. Pulling out tattered David Foster Wallace nonfiction between Feist and Broken while standing maybe 20 metres from stage I realise I’m exactly the kind of weird native curiosity I’d been hoping to ridicule. The weather, caught between rain-rain and empty-threat drizzle, is getting like the napless kids around here, in a kind of ill-tempered state that’s hardly malicious but should probably just give it a rest this one night and let the adults enjoy themselves.

Arriving a respectable half hour late, Broken bring much brass - two alto saxes, trombone - a trumpet, maybe? - launching as promised into ‘Capture the Flag’ and ‘KC Accidental’. While this unfolds it becomes eerily apparent that Brendan Canning, red-chinoed and scissor-kicking about the place, is visibly older than my mum. He looks like a dilapidated Wayne Coyne.

Obviously about half the mainstage bookings have some peripheral association with Broken, and the celebratory vibe is end-of-movie-esque without seeming contrived. Feist jumps to catch bubbles during ‘Almost Crimes’, full-grown exuberance embodied. It occurs that maybe she reasoned playing ‘1234’ might upstage the old gang, and I like her more.

A few songs in - the album’s cool-down phase - the unforced party feel lets up not. Kevin Drew makes everyone yell “I’m sorry!” on his count, then “I love you” followed by “I’ll call you tomorrow.” This is of course the most Canadian and/or Broken Social Scene thing that could literally possibly happen, anywhere anytime. The set concludes with ‘Superconnected’, ‘7/4 Shoreline’ and ‘Fire Eye’d Boy’, which are spectacular, rousing, arousing - all that.

How does it differ from the great British festival experience? I suppose the main distinction is that, it being a ‘one-dayer’ (this phrase seems far too cool-casual, doesn’t it, for what’s essentially the festival-equivalent divulgence of shrivelled genitalia), the only alcohol in our bloodstreams cost $9.50 a can (inc. tip), unless you’re one of those strangers who’s forked over forty bucks for wine in a hollow plastic mini-guitar - in which case well done but why - and the sense of ‘Us’ lies in a knot of unspoken and underrated contracts. Nobody will be calamitously drunk. Nobody will piss in a cup. Nobody will smoke near anybody else’s children and we’ll all go home to bed at a reasonable hour.

It’s a feeling Kevin Drew captures with succinct awareness as BSS exeunt to unreleased track ‘Jimmy and the Photocall’: “Let’s just try to be kind. There’s too much fucking traffic in this city and everyone’s in a bad mood. Thank you very much, we’re Broken Social Scene, we’ll always be your dad.” As patriarchs go, Toronto’s fathers of indie-rock are the finest a city could hope for. Theirs is a dream of innercity aspiration that will inspire and delight for decades to come.