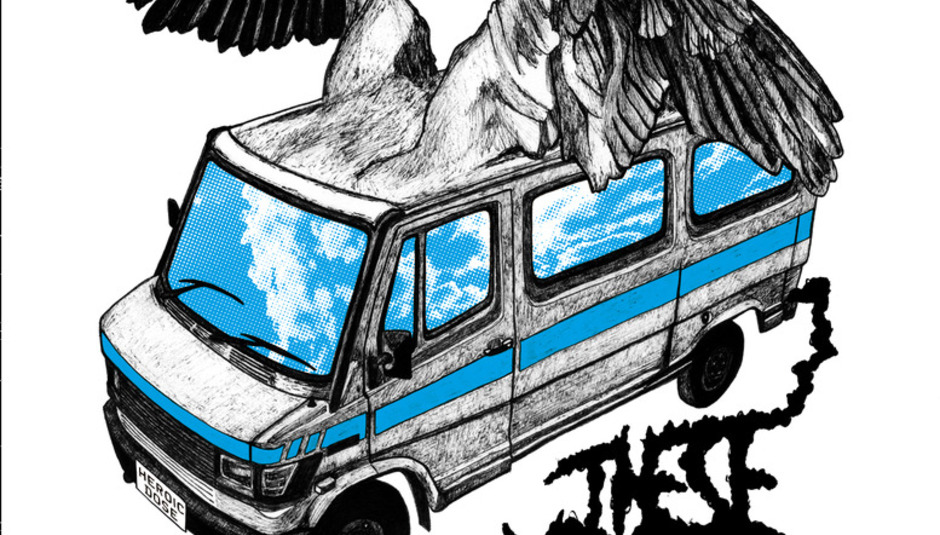 Like many others, as the weather gradually picks up, I have been slowly easing myself into the busy summer festival season via some city-based all-dayers. Live at Leeds set the ball rolling, having planted their flag firmly into the first Bank Holiday of May, whilst our West Yorkshire neighbours have laid claim to the second of the long weekends with the eclectic independent celebration that is Bradford Threadfest - definitely one to look out for next year. The next big circle on my calendar is Wakefield's turn with their lovingly curated Long Division happening across 7-9th June. Once these have passed, the upcoming summer season will see bands spending their weekends carting their kit between the UK’s most popular fields, meaning that a lot of the bands' release and gigging schedules are put on the backburner, and this also seems to be the case for a lot of local bands plans. Happily, whilst there’s been less to pick from this time around, what has emerged has been of a high calibre...

It's been a good little while since I was so bowled over by a new Leeds band, so I'll begin with Weirds, an impressive teenage four-piece who have just released their debut single, a double A-side of 'Crocodile / Yolk', via Denizen Recordings. The energetic space-rock riffs and echo-laden vocals hark back to more than a decade ago when The Music were one of the most heralded bands in Leeds, but the white boy funk has been extracted and replaced by something more sinister and aggressive. Full of swaggering confidence, 'Crocodile' is a fine piece of psychic infused grunge, whereas 'Yolk' is it's more brazen brother turbulently playing out a saga within. They don't currently have any Leeds gigs in the pipeline having only recently impressed at Nation of Shopkeepers, but they are worth keeping an eye out for.

Dinosaur Pile-Up recently announced their return, with two new tracks 'Arizona Waiting' and 'Derail' taken from the bands upcoming second album Nature Nurture, due for release on June 17th. There doesn't seem to have been many changes in the bands nature, with 'Arizona Waiting' retaining the heavy 90s American influences and their love for bringing the big riffs. Whereas 'Derail' sees the addition of some light keys and finds Matt Bigland at his most tuneful yet on the pop-rock chorus. Accompanying the latter track is the below B-movie inspired video which features several nods towards to the bands favourite directors and stars a former reality TV show celebrity.

Another band who form part of the bustling heavier end of the Leeds music spectrum, These Monsters, are also returning with a new album on Function Records. Entitled Heroic Dose, which is a clue towards the piping hot hit of adrenalin it’s ready to deliver within its sub-30 minute fix. Compared to their last album Call Me Dragon this isn't a different breed; it’s a whole different species. The band are now slimmed down to a three-piece and gone are the elongated jazz-infused prog voyages, replaced by powerfully directed bursts of angry, urgent energy which have more in common with their brethren Pulled Apart by Horses. It also sees guitarist Sam Pryor leap up to to the frontman role with aplomb, with his screaming venom recalling FOTL's Andy Falkous at full pelt. There’s an album launch at Wharf Chambers on June 15th with and they’ve managed to call in support from both Hawk Eyes and Backlisters to put together a killer line-up. I would fully recommend watching the accompanying video for the lead track 'When The Going Gets Weird' below - not only because it's a work of genius, but also because the guitar line in the middle 8 gives me the kind of highs that help make Heroic Dose a winning formula.

I happily tell anyone and everyone that Sky Larkin’s The Golden Spike is easily one of my favourite albums to come from a Leeds band since I moved to the city back in 2004, and last week I sadly discovered my CD has been scratched via overuse to the point of derailment. However, just two days later I was being cheered by the news that after a three year absence, the oft-overlooked band have found time between their various other life occupations (most notably frontwoman Katie Harkin’s time as a touring member of Wild Beasts) to follow up Kaleide with a third album. The record is as yet without a release date and is currently untitled, but we know that it was again recorded in Seattle with long-time collaborator John Goodmanson, and they have offered the first glimpse with the track ‘Motto’ below. There has been a little line-up change around and the band are now one band member and two new faces up (one of which is Sam Pryor of the aforementioned These Monsters on bass); it will be interesting to see what effect becoming freed from the restrictiveness of a three-piece has upon their sound. ‘Motto’ shows that Harkin certainly hasn’t lost her knack for a melodic rhyme (“sloganeers bending my ears”), and it possesses all the unmistakable Sky Larkin vim and playfulness, before kicking up the dust and rumbling off on the back of a extended outro which could almost be the sound of an augmented Blood Red Shoes. They wil be supporting Marnie Stern at the Brudenell on 3rd June, as well as headlining the little shindig mentioned below...

This next event isn’t exactly a Leeds event but is a joint effort from two of Leeds finest independent promoters, British Wildlife and Dead Young Records, and will see a large number of on form Leeds bands decamp up the road to the picturesque surroundings of Lake Windermere. Entitled Fell Foot Sound it is set to be a very intimate boutique festival experience with tickets limited to only 200, and so far the line-up features the likes of Sky Larkin, Hey Sholay, Cowtown, Witch Hunt, Dancing Years, Sam Airey, Swimming Lessons (from whom you can hear an excellent brand new track below), with more to be announced. I’m told there will even be proper toilets too, as well as decent ale and home cooked food. Early bird tickets are available until 1st June at the very attractive price of £35.

Also playing Fell Foot Sound are Ikestra, who form part of the roster of the newly formed Destroy All Records. It's the creation of Dave Jackson and Marcus Clarke who have been promoting left-field rock bands in Leeds since 2007 and have now decided to foray into the label world and use their infectious enthusiasm to help push several new bands. Ikestra's seven members have amassed a percussive armada full of rhythm and complex funk that is likely to appeal to fans of Battles, !!!, and The Mars Volta - their self-titled LP is out now. The label also plays host to abstract five-piece Mahogany Hand Glider, who recently released their second EP 'Bless The Fat', a tightly-woven tapestry of cosmic instrumental math-grooves available via CD now.

As one new label arrives another sadly departs - with last week delivering the news that local noise merchants Brew Records have decided to call time on their 6 year run as purveyors of all that is both great and loud. They were no doubt an inspiration for many other labels such as Destroy All Records coming in to existence, having released albums from many names to have graced these pages, including Blacklisters, Hawk Eyes, These Monsters and Holy State. Brew also played a huge contribution towards building Leeds' strong reputation with regards to heavy music and its close-knit scene. Before they shut up shop completely there's a closing down sale, with loads of releases also available on a pay what you want basis over at their bandcamp here - Bandcamp

Aside from gigs and releases, Leeds is also currently playing host to Brian Duffy's prestigious Bowie Collection, well more specifically White Cloth Gallery on Aire Street is. At present The Duffy Collection has many pieces housed at the long sold out 'is' exhibition inside the V&A, but you'll be able to see many of the infamous shots exclusively (including the original and only Aladdin Sane print) in Leeds until July 17th. Keep an eye out for accompanying Bowie films being screened in the gallery too.

Leeds also recently housed another excellent exhibition in 'Mock N Roll' – a unique collaboration between illustrator Jack Hudson and the 3D image creators Lord Whitney, which saw them produce a collection of giant works inspired by a host of the 80s most vibrant and iconic album covers. Unfortunately the exhibition itself has passed, but you can still listen to and download ten accompanying original tracks, all of which were specially commissioned for and inspired by the project. The compilation features a whole host of recognizable names lending their talents and experimenting with sounds far removed from their usual styles, including Department M, Lone Wolf, Sky Larkin and Pulled Apart By Horses.

Here are a few other gig highlights coming soon...

As usual we welcome all gig, release and label news - direct it to myself at leeds@drownedinsound.com.